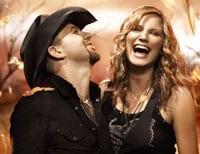 Sugarland has scheduled more than 30 dates for its upcoming run, opening April 10 in hometown Atlanta. The 2009 leg of the duo’s successful Love On The Inside Tour is supporting its platinum-selling third album of the same name. Joining them on the road will be Mercury Nashville labelmate Billy Currington, RCA recording artist Jake Owen, and AAA singer-songwriters Matt Nathanson and Eric Hutchinson. With shows running through October, mainly at arenas and amphitheaters, the outing includes several Canadians stops.

Jennifer Nettles and Kristian Bush are going on their first overseas tour during the month of March. Traveling to seven different countries (Italy, Great Britian, Ireland, France, Germany, the Netherlands), they will perform in 11 different European cities. Labelmate Holly Williams, whose first country single is at radio now, will open select dates.