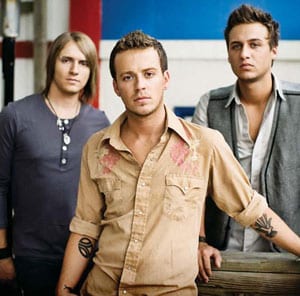 Love and Theft is the Carolwood Records trio of Stephen Barker Liles, Eric Gunderson and Brian Bandas, and “Runaway” is the group’s debut single. The young group’s career to this point has been filled with some magic moments.

When making the rounds to the labels, they played a short showcase for Lyric Street A&R Chief Doug Howard who said, “You should never have made it into my office… you should have already been signed! Please don’t play for anyone else.”

To make matters sweeter, Taylor Swift heard the trio’s music and brought them on board as an opening act for her headlining concerts in 2008. Others quickly came on board–like Robert Ellis Orral and Jeff Coplan, who are producing the group’s debut album.

“We rehearsed for six months before we ever felt like we wanted to take our music out in front of people,” says Stephen. “We wanted to spend time writing music,” adds Eric, “and making sure we had the right songs to showcase our vocals and make our harmonies stand out.”

In fact, all three are able songwriters who wrote or co-wrote every song on their debut album. They met not long after each arrived in Nashville, and their special chemistry enabled them to forge a unique sound.

“We consciously decided not any one of us would be the lead singer,” says Eric. “We all rotate singing lead and see where the harmonies fall most naturally. In most songs, each of us will sing a different verse or the bridge. Then, our signature is that big three-part harmony on the chorus. It doesn’t really matter who’s singing lead or who’s singing harmony. Somehow it just works.”

“Nothing beats country songwriting,” says Stephen. “That’s as real as it gets and that’s why we’re here. We love what it represents and we want to carry it forward.”