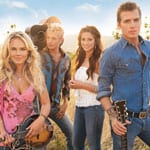 Newcomers Gloriana have been invited to open for LeAnn Rimes on six upcoming tour dates in Washington, California, and Nevada. The band made up of Tom Gossin (vocals, guitars), Mike Gossin (vocals, guitars), Rachel Reinert (vocals), and Cheyenne Kimball (vocals, mandolin) is already creating a buzz with debut single “Wild At Heart,” from its upcoming Emblem Music Group release.

Gloriana and the Eli Young Band are both set to perform at MusicRow’s CRS Meet & Greet on March 3, 2:30-5 PM, at Cadillac Ranch.