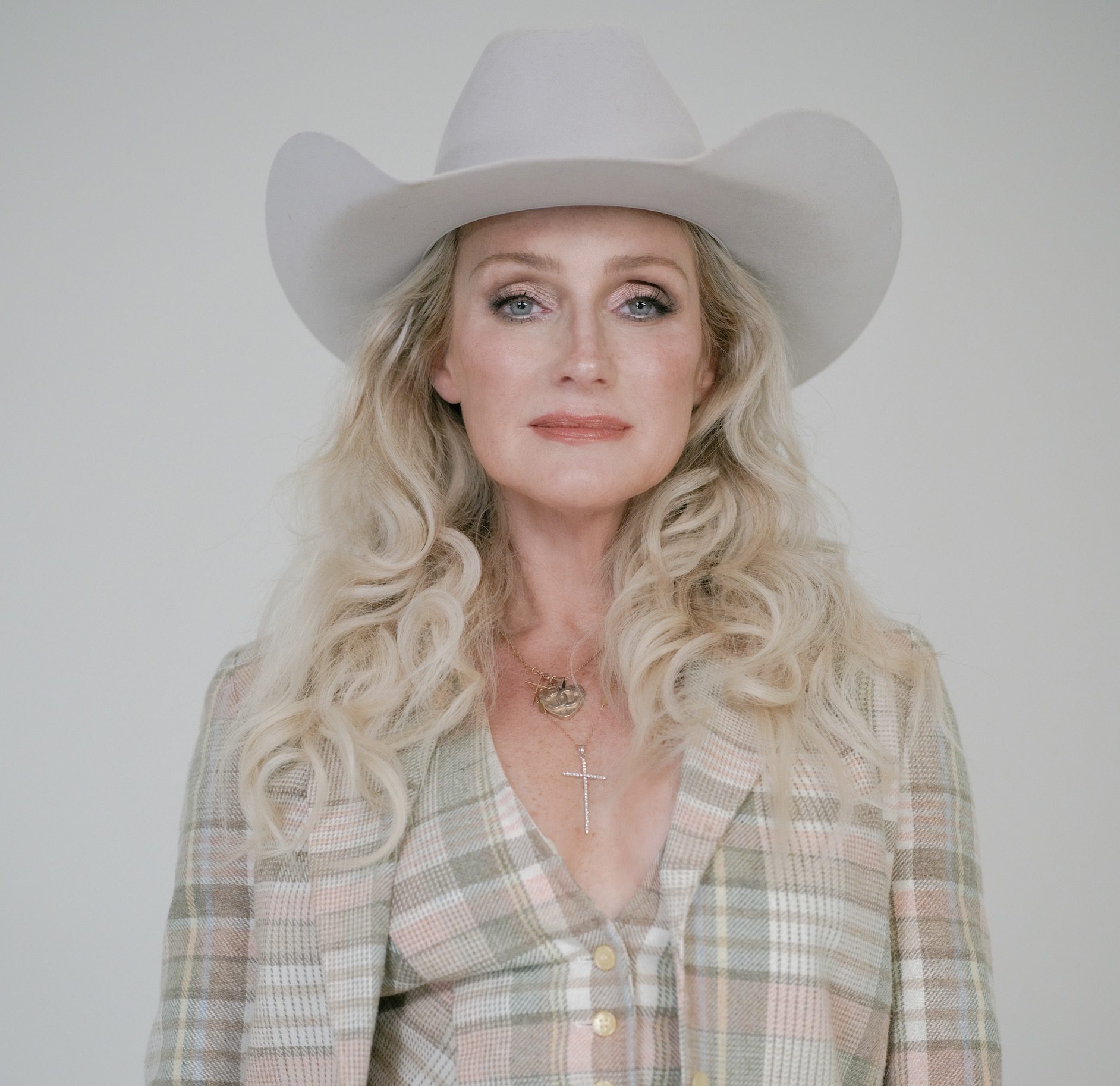 Nashville music executive Missi Gallimore is a triple threat in the country music scene. Over the past 20 years, she has built a reputation as a highly-respected publisher and A&R executive responsible for pairing Tim McGraw with over 29 No. 1 hits, including “I Like It, I Love It” and “Live Like You Were Dying.” She was behind Faith Hill recording “This Kiss” and “Breathe,” and she introduced Keith Urban to the 5x Platinum-selling “Blue Ain’t Your Color.”

Now, her newly-launched Truth Management is shepherding the careers of hot newcomers Sam Williams, grandson of Hank Williams Sr. and son of Hank Jr., in addition to Shy Carter, noted singer-songwriter Abbey Cone, and sibling trio Track45. Gallimore is the sole owner of two publishing companies, Amped Entertainment and Truth or Dare, both of which are joint ventures with Kobalt Music Publishing and Warner Chappell, respectively.

I actually grew up in Nashville. I moved here when I was 10 years old, so Nashville is home for me. 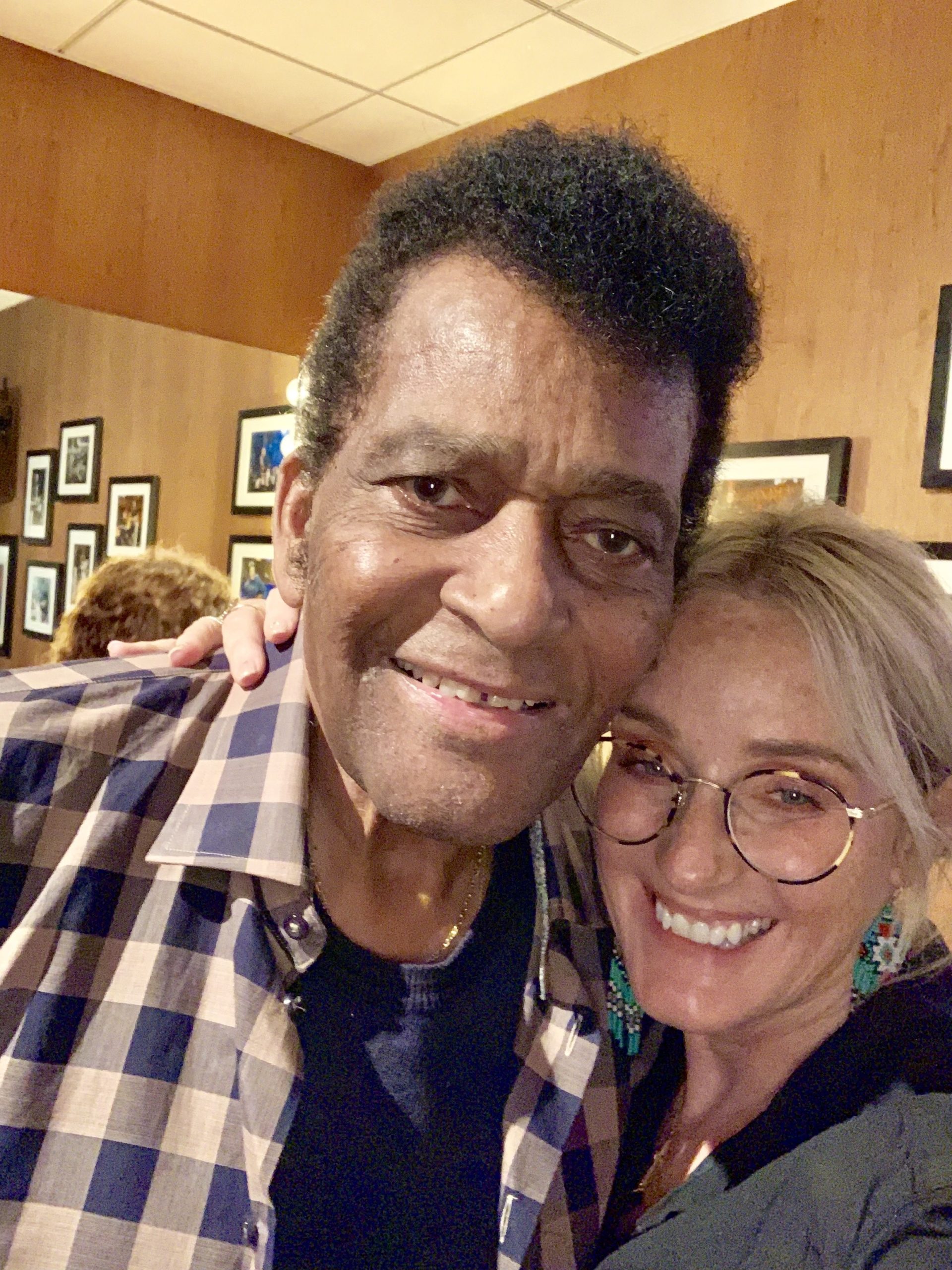 Did you always want to work in the music business? How did you get into it?

Heavens no. When I started the business, I knew nothing about country music. Never even listened to country music. I had just graduated college at MTSU and was looking for a job, still living with my parents. I had applied for a receptionist position at a law firm. I didn’t get the job, but they liked me enough to pass on my resume to a record producer in town at the time by the name of Billy Sherrill. I had no idea who Billy Sherrill was, but I got a call from his assistant one day and they wanted me to come interview with him.

I go to the interview around six o’clock at night on 16th Avenue in an old house. I walk in and I’m thinking, “Oh my God, what have I gotten myself into?” I walk up the steps of this old house where Billy’s studio was and he offers me champagne. He plays me a song that he had just cut—I think it might have been David Allan Coe—and he’s like, “What do you think about this song?” I say, “Well, I don’t really like it. I’ve never really listened to country music, so I can’t relate to it.” He was like, “You’re hired!” (Laughs) I guess he liked that I was honest and truthful.

I [ended up being] his face at CBS Records at the time, because he never came in but he wanted somebody there to take calls and represent Billy at the label. So I was at the label representing him for a couple of years, and then he left CBS and went and did his own thing. Then he retired and completely quit doing records. I learned so much from Billy.

I left there and started working for Charley Pride, just as a catchall for anything at his publishing company. I started out doing administrative type stuff and then worked my way up to pitching songs. That’s where I met my husband, Byron Gallimore, who was producing but didn’t have any big acts at the time. He started producing Tim McGraw and then he got very, very busy. One day Byron was like, “I’m too busy to go look for songs. Can you start looking for songs for Tim?” That was my intro into the A&R world. 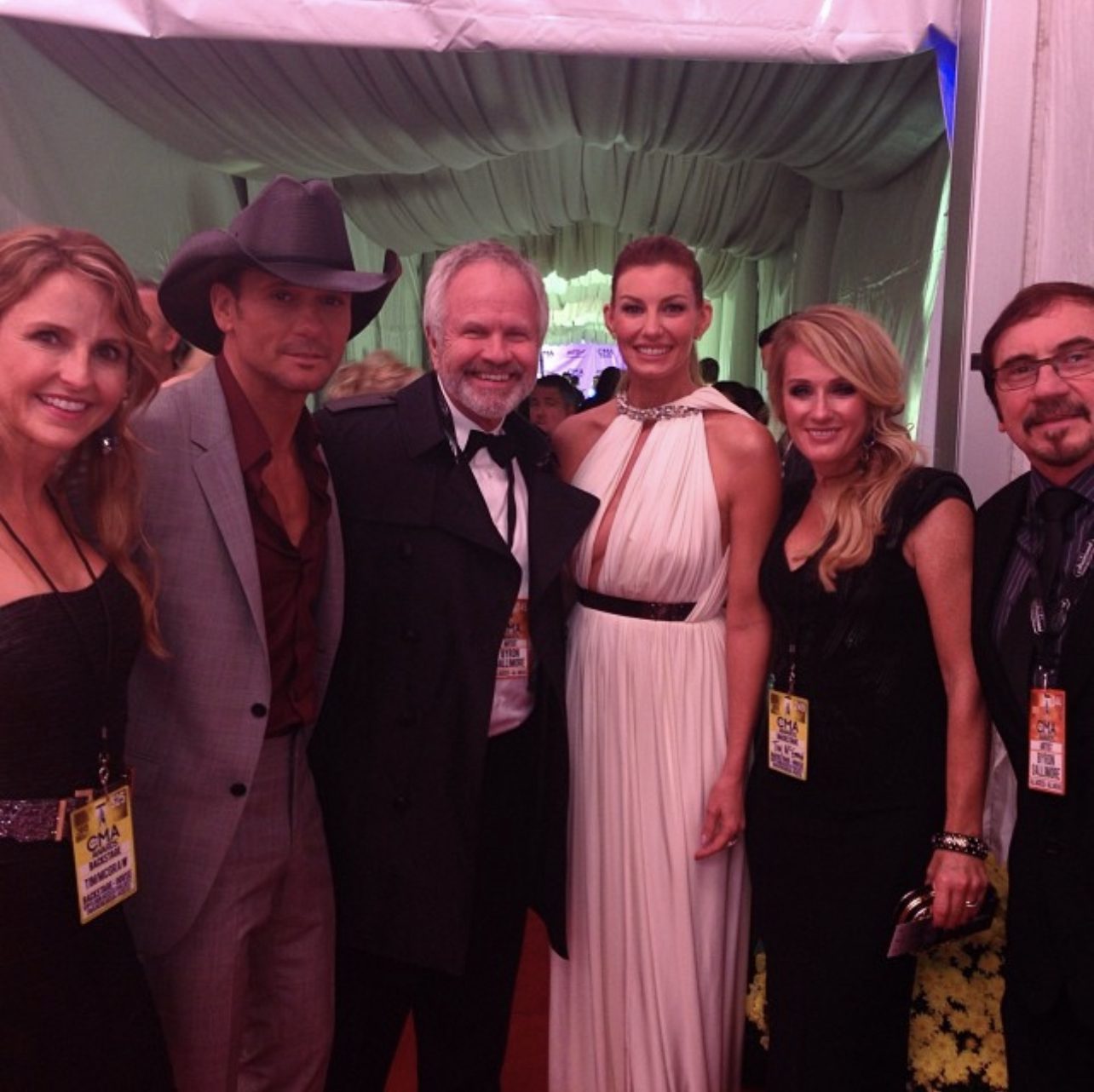 Missi Gallimore (second from right) backstage at the CMA Awards

You found some really big songs for Tim McGraw, as well as other artists. Tell me about finding some of those songs.

For “Live Like You Were Dying,” Tim was pretty much done with his album. I can remember exactly where I was when I got the call from Chris Oglesby from BMG. He said, “Hey, I just heard this song at the studio. Craig Wiseman is at the studio now they just recorded it. You really need to get over here and listen to this song. It’s a great song.” I was getting on the interstate at Demonbreun, and Craig Wiseman was recording at County Q—a studio in Berry Hill. I turned my car around and got my booty over to County Q. I walked in, heard the song, and put it on hold for Tim immediately. Back in the day, it was very competitive for whoever got the first hold on the song. It was always a battle. I left the studio with the song, sent the song to Tim, he called me immediately and said “I’m cutting this.” We go in, we cut it, and there it is… A big, huge song.

I’ve worked with Keith Urban on his last three or four albums. I came in late in the process [when he was working on his Ripcord album]. He had pretty much already finished the album. He brought me on and I’m thinking, “Oh goodness, how am I going to find songs for him now? He’s pretty much done.” It was a snow day and Nate Lowery from Brett James‘ company, Cornman Music, pitched me a link. “Blue Ain’t Your Color” was on the link. I remember sitting at my computer on this snow day, kids running around everywhere, listening to the link of songs and that one just stuck out. I put it on hold, pitched to Keith and it did what it did. 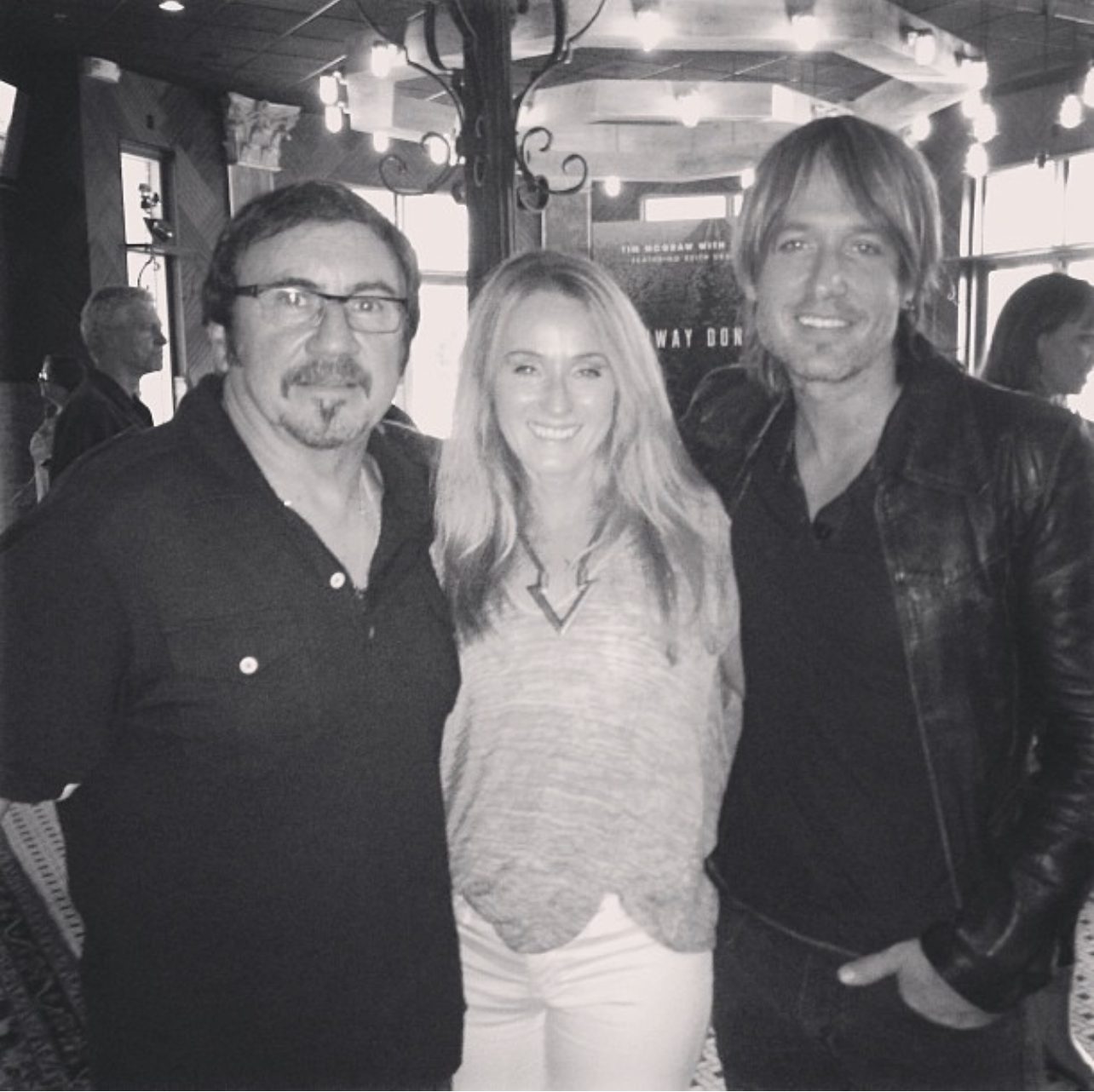 What got you into management?

I’ve been doing A&R for so long. It’s still a passion for me—I still get excited when I hear a great song. I still wanted to do that, but I just felt like I needed to do something different. I has been working with Shy Carter for a long time. Shy had been coming to town and pitching me songs. I knew he was an artist and I knew he was somebody that I really, really believed in as an artist. I loved his songs, I had gotten so many of his songs cut. So I went to Shy one day and said, “Hey, you need to move to Nashville. You need to plant roots here. You’re having all your success in the country market as a songwriter. You’re an artist. Let’s focus on you writing for you as an artist. Let me manage you.” That’s how all that started

Now I have four acts that all got record deals at the same time, during COVID. Sam Williams came to me four years ago. He was writing poems but he wanted to be a songwriter. There was something in those poems that was so raw and so real, and I loved his voice. There’s something that I really love about taking an artist like Sam, Shy, Track45 or Abbey Cone and developing them and seeing it through all the way to them getting a record deal.

I have Truth or Dare Publishing, which is co-venture with Warner Chappell. Sam Williams signed to that, as well as Ben Roberts of Carolina Story and Mary Gauthier. I have another company called Amped Entertainment with writers Tommy Cecil and KK Johnson, the lead singer of Track45.

Charley Pride. I will get teary-eyed talking about him. He and Rozene were the most humble and encouraging people. They let you be you as far as work and freedom. They taught me the publishing ropes; they were very influential in my coming up in the music industry. They were just amazing people.