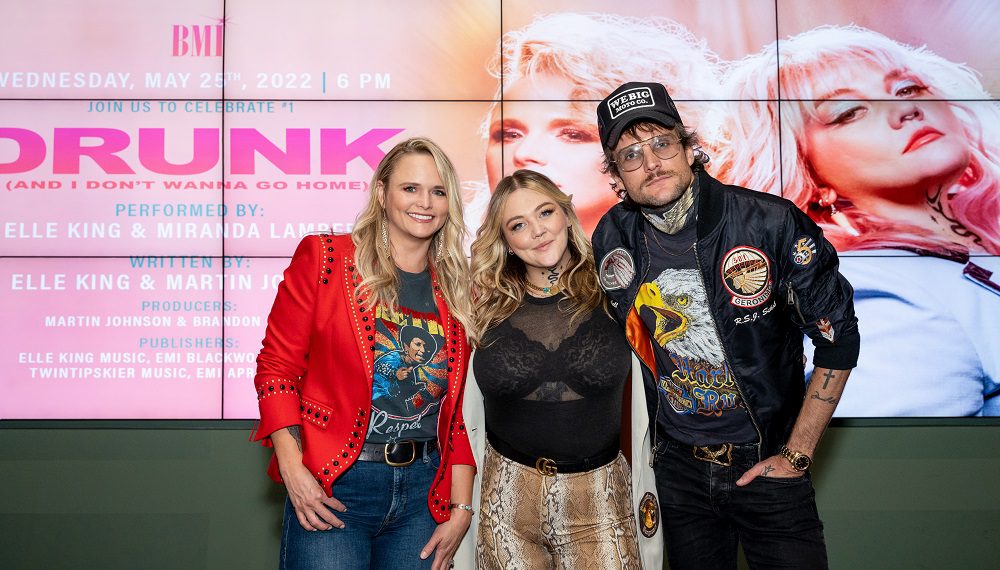 The tune was written by King and Martin Johnson, and produced by Johnson and Brandon Paddock. 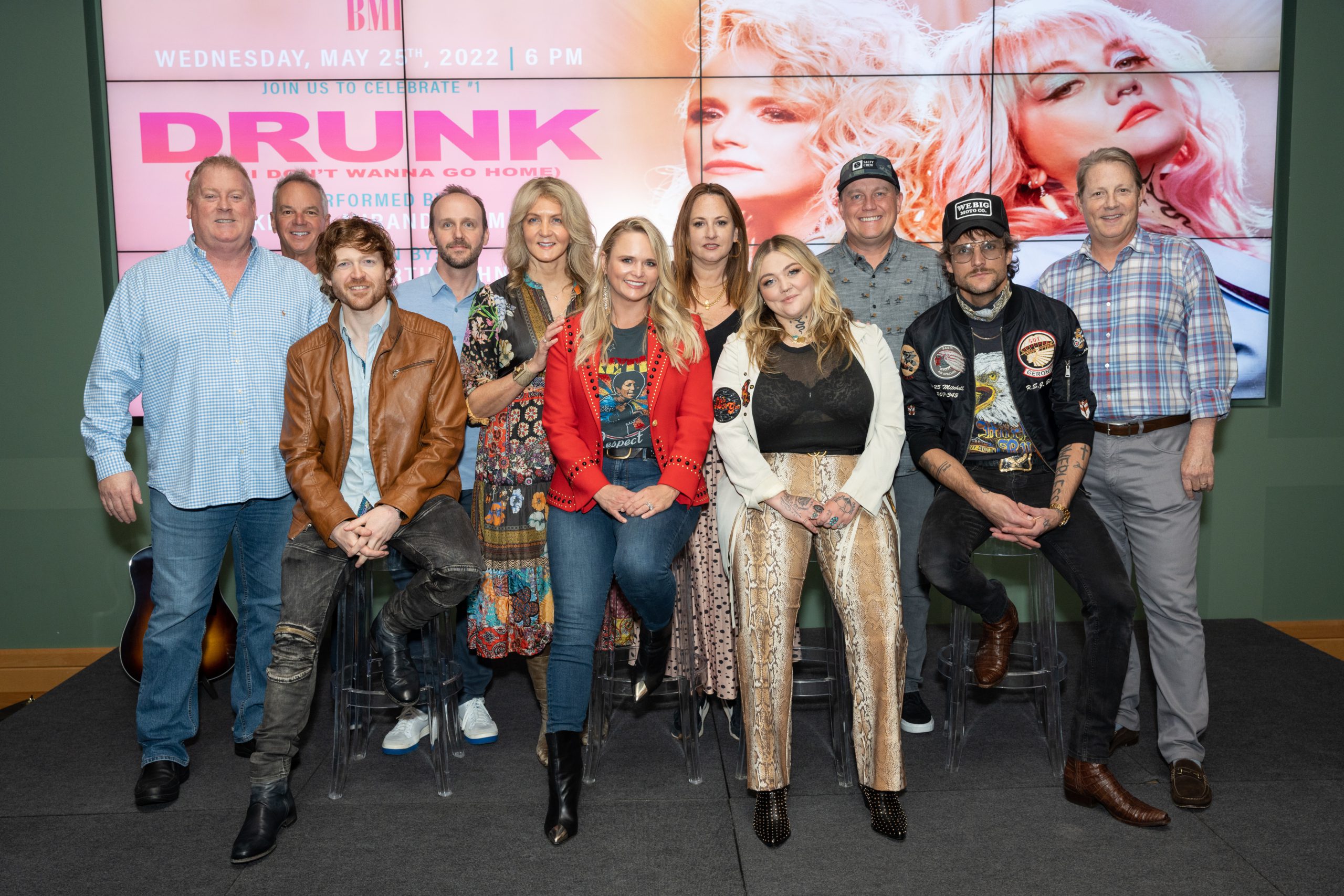 BMI’s Clay Bradley served as the host for the occasion. He got everything started by letting the crowd of industry members know that “Drunk (And I Don’t Wanna Go Home)” topping the charts marked the first time a solo-female duet has reached the No. 1 spot on Billboard’s Country Airplay chart since Reba McEntire and Linda Davis’ “Does He Love You” in 1993.

“That’s a huge accomplishment,” Bradley said. “Everything about this record represents quality. The songwriting, the recording and the mix are superior.”

He continued, “We’ve all known Elle King since her 2014 release of ‘Ex’s & Oh’s,’ the song that introduced her to the world. The music has always been revolutionary, mixing genres and hanging out on the periphery of the country music genre… But not anymore. I want to officially welcome you to the neighborhood,” Bradley said to King. “Your music and vibe are important to the growth of our ever-evolving community. We can’t wait to see what comes next.”

Bradley also spoke about Lambert, calling her “one of the most important songwriters in the modern era.”

ASCAP’s Mike Sistad was on hand to talk about co-writer and co-producer, Johnson. Sistad pointed out that, like King, Johnson has come to country music with success in other genres—both in his band Boys Like Girls and with his solo project, The Night Game.

“His songs have sold over 25 million copies and he’s had 10 Billboard Top 40 songs,” he said. “Today, we get to celebrate Martin’s very first No. 1 country song. We’re proud to represent you at ASCAP.”

Sony Music Publishing’s Rusty Gaston was the only publisher to speak, as Sony represents both King and Johnson. “I’ve said it before, but it takes an absolute miracle of Biblical proportion to get a song up the country airplay charts,” he said before recognizing the radio promo team at Sony Music Nashville.

Gaston told stories about meeting both of the eclectic writers, pointing out that King had made a superb country record that is to come. “We are so proud that you are becoming more of a part of this community,” Gaston told the beaming artist. 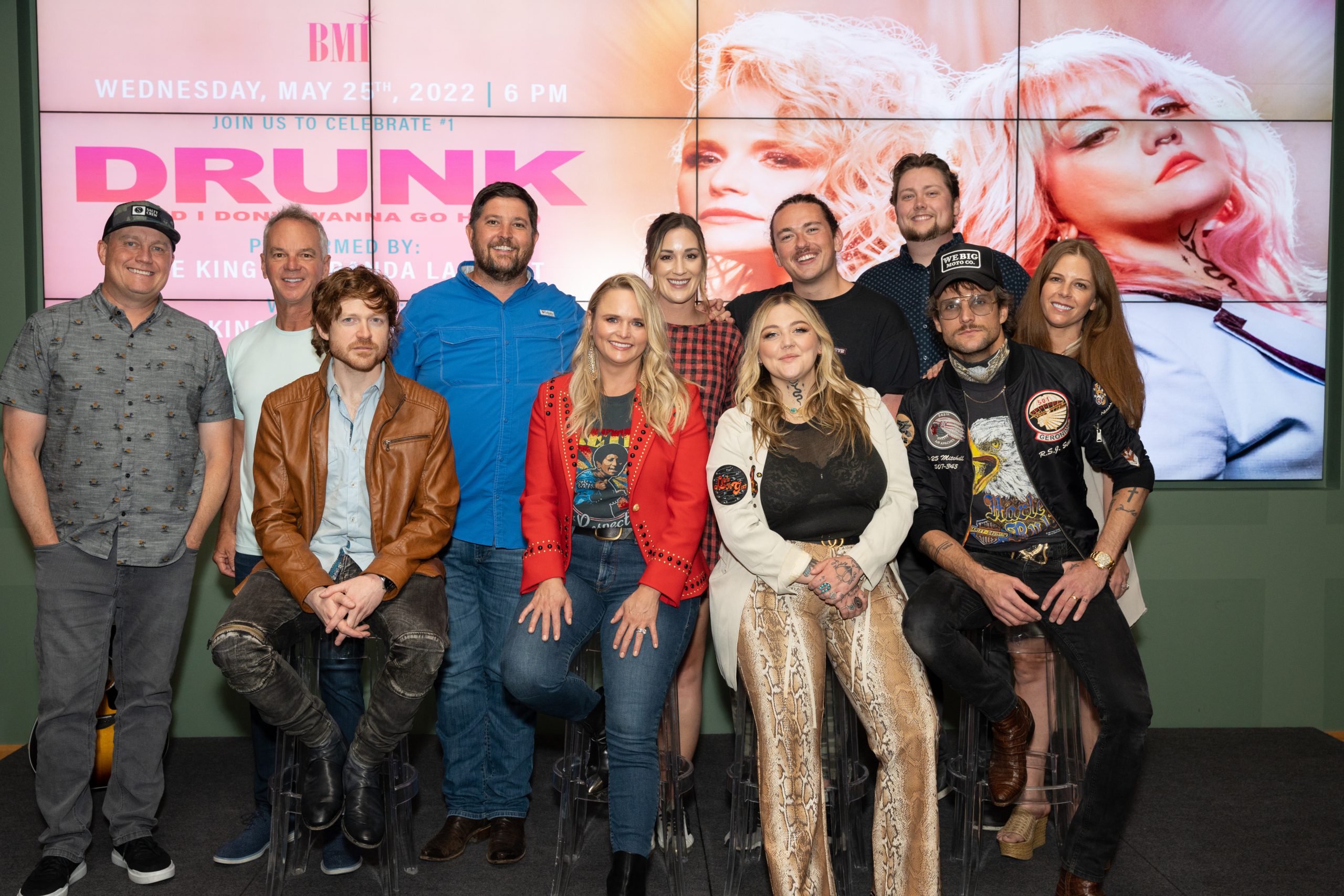 Sony Music Nashville’s Shane Allen represented the radio promo team that got “Drunk (And I Don’t Wanna Go Home)” up the charts. “Elle, working this single and working with you has been a complete pleasure,” he said. “We’re proud to represent your artistry.”

Johnson was funny and gracious when he stepped up to the mic. He told the story of him and King writing the tune nearly 10 years ago.

“I root for the rock and roll star,” Johnson said. “I think we need it, I think it’s important. I think that edge and a little bit of loose ends are key to feeling something and to feeling when an artist can make a cultural impact because you believe them,” he said of King.

King oozed charisma when she spoke. Her and Lambert clutched hands as King started thanking her team.

“I went to one of these parties one time,” she said. “It would be a disservice to myself and my own gratitude attitude to not say thank you to Dierks Bentley for bringing me into this world that has absolutely changed my life.

“I have never felt so embraced or welcomed—or felt like I had a seat at the table—until I was brought into country music,” she added, recognizing Harrington for ushering her into the genre.

King pointed out that even though “Drunk (And I Don’t Wanna Go Home)” is a fun song, it also was an anthem for post-pandemic life. “With everything that we have been through as a country, as a planet, and as a galaxy in the last couple of years, what we need is a freaking anthem about not wanting to be stuck inside. The fact that we get to sing this song on stage and celebrate it with everybody is a beautiful moment because we all get to be together again.”

Lambert agreed. “[The song] might not have meant anything when we recorded it, but after what we went through as a country and a galaxy… Getting to do it every night live, I see the impact we actually made,” she said.