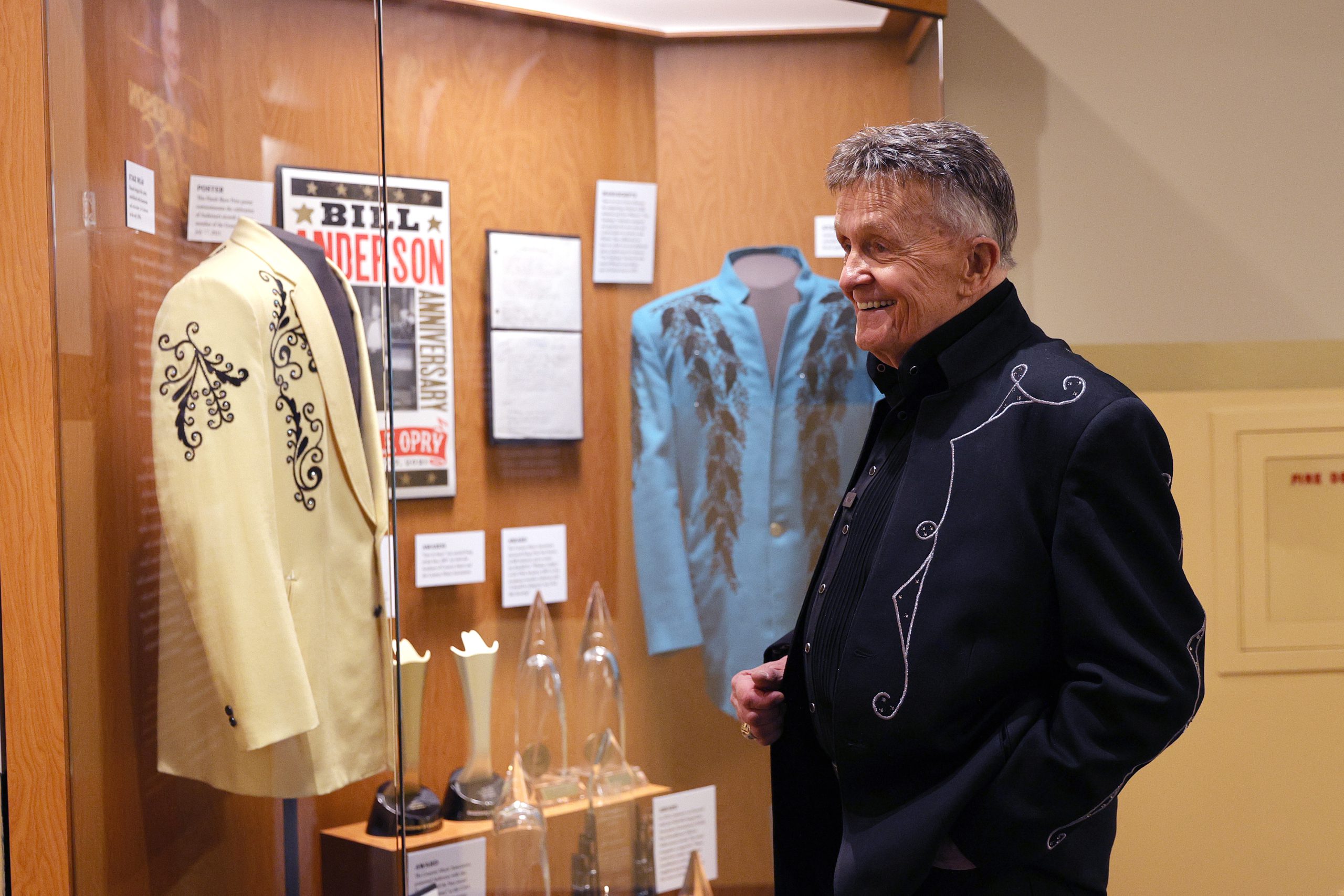 Thursday night the great Whispering Bill Anderson was celebrated at the opening of his new Country Music Hall of Fame and Museum Exhibit. Titled As Far As I Can See, the exhibit features memorabilia including Anderson’s stage-wear, lyric sheets, awards, and many other unique pieces. It opens to the public today (Dec. 3) and runs through March 19, 2023.

Artists and industry members came out in droves—and braved a Predators game crowd that swarmed Demonbreun—to show their love and support to the ever-so-lovable Bill Anderson. Kyle Young, CEO of the Country Music Hall of Fame and Museum, spoke about Anderson’s career and his value to the country music industry, not just because of his longevity, but because of the gift of his songs. 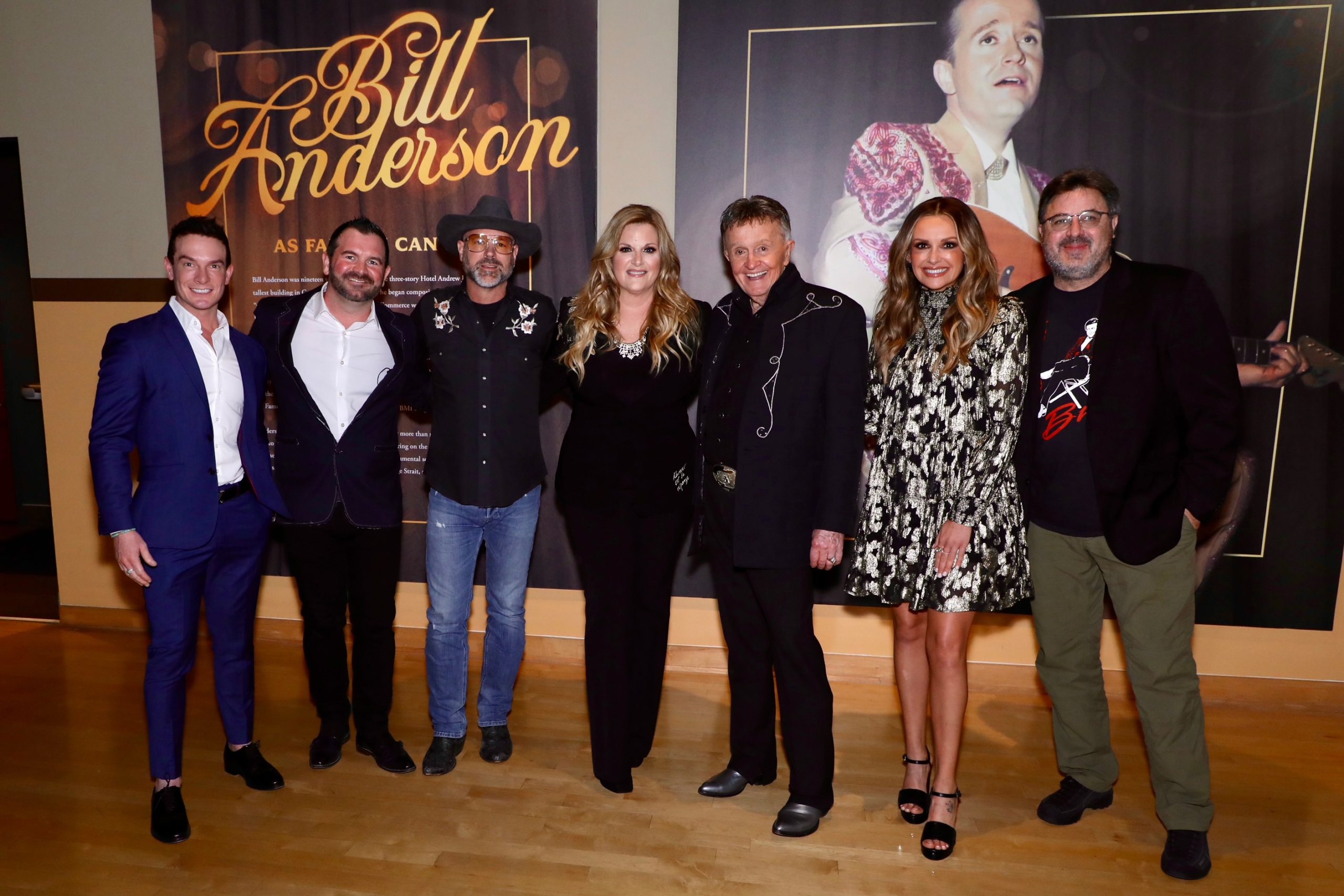 Some of Nashville’s world-class singers were on hand to tribute Anderson. Trisha Yearwood did an awesome cover of Connie Smith‘s “Once A Day,” the tune Anderson wrote that launched Smith’s career. Anderson also helped Smith—now both members of the CMHOF—land her first recording contract. Vince Gill sang “Which Bridge to Cross (Which Bridge to Burn),” a song Gill wrote with Anderson and recorded.

Jon Randall and Carly Pearce did a beautiful take on “Whiskey Lullaby.” Randall, Anderson’s co-writer on the iconic tune, was honored to perform it for his collaborator.

Anderson was emotional and well-spoken when he took the stage. He thanked what seemed like an endless group of people, careful not to leave anyone out.

“I’ve heard all my life that at some point just before a person dies, their life passes in front of their eyes,” Anderson said. “Somebody better check my pulse because a couple hours ago when I laid eyes on my exhibit for the first time, I felt like my life—or at least the very best part of it—was passing right before my eyes.

“To see 60-plus years come alive again in this incredible display truly took my breath away. The title of this exhibit As Fas As I Can See, but in all honesty, I never saw this far.”

A few weeks back, Anderson sat down with MusicRow in preparation for the exhibit opening, to talk about the last 60 years and some of his favorite memories.

MusicRow: When did you decide you wanted to be a country music singer?

I’m still trying to figure out what I want to be when I grow up. I’ve just postponed growing up. It all just kind of happened, really and truly. There were three things in my life growing up that I loved: I loved country music, I loved sports—particularly baseball—and I loved to write.

I would have been happy doing any sort of combination that involved any one of those three. But when I wrote “City Lights” and it hit, the path was defined for me.

Your recording of “City Lights” hit while you were still in college at the University of Georgia. Then it became a hit with Ray Price. How did you manage that?

I wrote the song in Commerce, Georgia on top of the little hotel where I was living. They were building a TV studio in Athens, which is now a Georgia Public Television educational station, but they didn’t have the studio finished. They had the audio in, but they didn’t have the video components. A friend of mine who was a disc jockey on a station in Athens said, “Hey, we can get in that studio. They want somebody to come in there and test the equipment.” So we went to this studio, which is still there, and recorded two songs.

The songs weren’t published or anything but I sent out the tape. A man down in Texas named Bob Tanner at a little record label called TMT Records and Publishing Company wrote me back and said, “Hey, you never know where the next hit is coming from!” The next thing I knew, he published the songs and put out my record and my record got to Nashville.

I sent [“City Lights”] to reporter Charlie Lamb to be reviewed in the Music Reporter. He liked it so much he took it to Chet Atkins over at RCA. Chet was producing an artist at that time named Dave Rich on RCA, and Chet recorded “City Lights” with him.

Ernest Tubb and Ray Price were riding to the golf course one day when Dave Rich’s record came on the radio. Ernest Tubb said, “Son, you ought to record that song,” to which Ray said, “I’ve already got my next record cut.” I heard all this later on of course, but all the way around the golf course Ernest Tubb kept telling Ray, “You need to record that ‘City Lights’ song.” I’ve often wondered if Ray recorded it because he liked it or just to shut Ernest up. But you talk about things just falling into place, it’s amazing looking back on it now and how it all happened.

Wow. How soon after that did you move to Nashville?

I graduated at 11 o’clock in the morning and I was headed to Nashville at 2. My car was packed and I was on the road.

After you arrived, the hits kept coming. You signed with Decca in 1958, and started having more hits with “That’s What It’s Like to Be Lonesome,” “The Tip of My Fingers” and “Po’ Folks.” You were invited to join the Grand Ole Opry in 1961. When did it feel like you had “made it”?

When they told me they were going to open up an exhibit at the Hall of Fame. I started suspecting it about that time.

I don’t know if I ever did really. [Maybe when] “Still” hit. “Still” was so big, it was one of those monster crossover records. I just never relaxed and said, “Okay, I’ve made it. Here’s what I was working for.” There was always the next challenge, that next hill to climb. It’s funny, I’ve talked about this with other artists in the business, you can’t enjoy having a No. 1 record because you’re worried about what you’re going to follow it up with.

I never got to the point where I relaxed, but I really didn’t want to though. I was just so enamored and caught up in it all. I just kept wanting to open door No. 2 and door No. 3, and see what was behind there. I found some interesting things behind some of those doors. 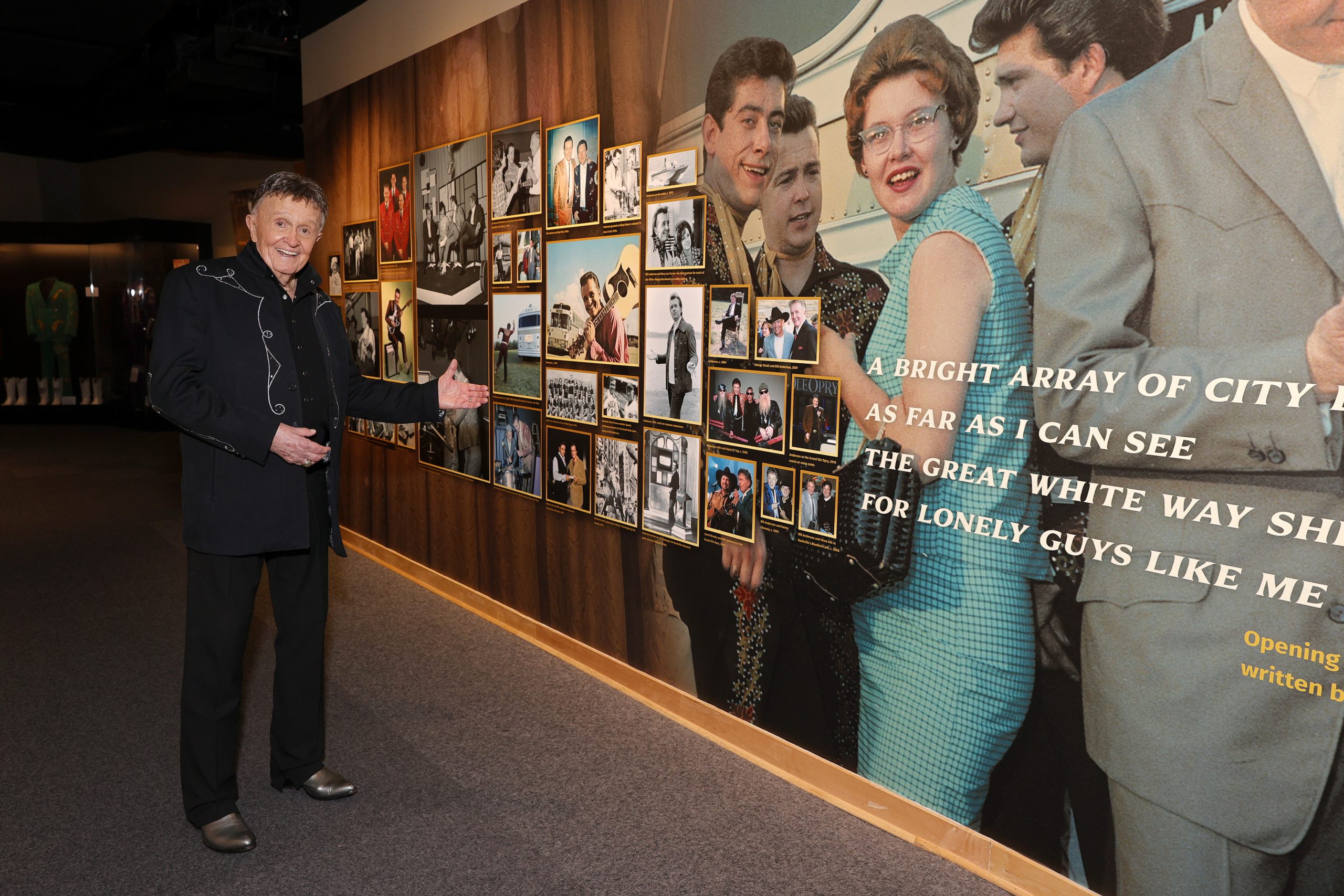 As a songwriter, you have placed songs on the country charts in seven consecutive decades, writing hits such as “Still,” “Once A Day,” “Which Bridge to Cross (Which Bridge to Burn),” “Whiskey Lullaby,” and “Give It Away.” What is the secret to longevity as a country songwriter?

Well, you have to live a long time.

Staying aware of the world around you. That’s how you stay relevant and by staying relevant, you’re able to continue and hopefully change with the times. Adapt and keep an open mind about everything. I have writer friends that say, “The music is different, it’s changed. I don’t want to try to write anymore.” I had that attitude for a short while in the ’80s when I took off and started doing game shows and soap operas and crazy things. But I never quit feeling that the next song that I was going to write was going to be the best one. I just never quit that. I never felt like the fire in my belly went out, it just kept burning.

And I surrounded myself with young people, particularly when I started co-writing in the ’90s. I was writing with Brad Paisley virtually before anybody knew who he was. I was writing with the Vince Gill‘s and the Jon Randall‘s and so many of these people that were younger than me. And I was like a sponge—I was soaking up what I could learn from them. At the same time, I think they were learning a few things from me about how it used to be done.

What business advice would you give to younger songwriters?

I know this isn’t always possible, and I know there are advantages to getting the better deal and moving around, but I’m going to tell you what, from where I am right now with my perspective on the business and on life, I am so glad that I’m not having to go all over the world trying to round up my songs. I know where my songs are. My songs are at Sony and Round Hill Music. I don’t really have but two places to go, and I’ve bought some of my songs back. I would advise people, if you’ve got a good situation with a good publisher, try to hang in there with it because there’s a lot of advantage.

You’ve won so many awards and been honored by all the major country music and songwriting institutions. You’re a member of the Songwriters Hall of Fame, the Country Music Hall of Fame, and the Grand Ole Opry. Now you have your very own Hall of Fame exhibit. What moments in your career have meant the most to you?

In [chronological] order, being asked to join the Grand Ole Opry is No. 1. Then having a big crossover record like “Still” was amazing. But the top rung on the ladder is [being inducted into] the Hall of Fame. That’s something that you don’t even dare to think about. Lord knows I didn’t.

That was just something that happened to somebody else. That kind of thing wasn’t going to happen to Bill Anderson from Commerce, Georgia. I thought they were lying when they called me and told me.

How does all of this feel, looking back?

This all feels very special to me because I’ve loved country music all my life. I grew up from a very early age listening to it and following it. To think that I’ve made a career out of it and people are going to come and look at some of the things that I did along the way… It’s pretty heavy. It’s extremely special.