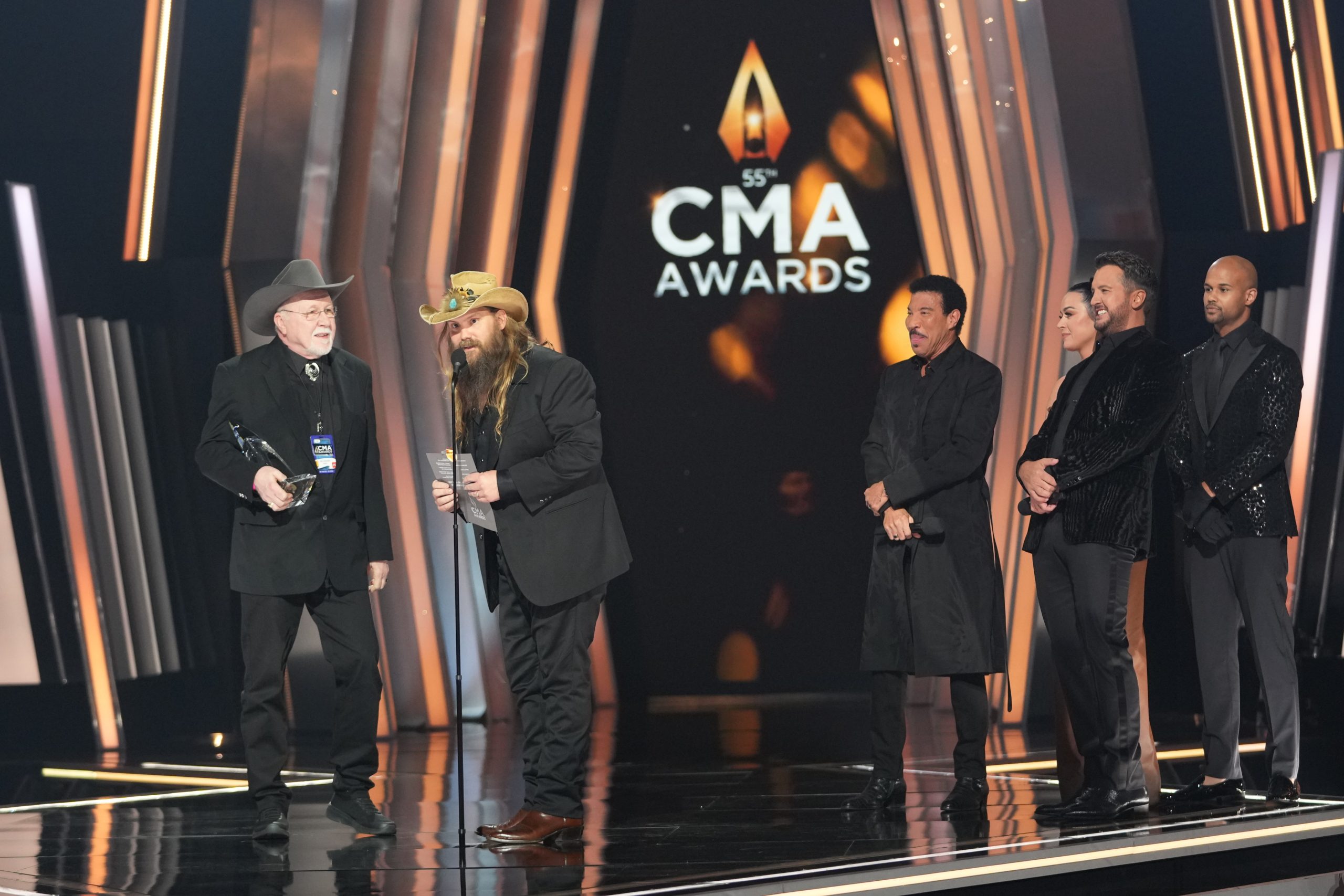 Pictured: Chris Stapleton and Mike Henderson accept the Song of the Year award for “Starting Over” at The 55th Annual CMA Awards. Photo: John Russell/CMA

The Country Music Association returned to Nashville’s Bridgestone Arena last night (Nov. 10) for its 55th Annual CMA Awards, after it was held for a limited audience at the Music City Center last year due to the COVID-19 pandemic. Hosted by Luke Bryan for the first time, the evening was filled with several great performances, social statements, and lots of Chris Stapleton.

Bryan, a two-time Entertainer of the Year, kicked his first time hosting off with a monologue that included some shade for his lack of nominations this year, jokes over COVID protocols, praise to the Atlanta Braves for winning the World Series, and playful introductions for his friends in the audience. Throughout the night other stars—including fellow American Idol judges Lionel Richie and Katy Perry, as well as Lady A, Darius Rucker, Elle King, and more—appeared to “help” Bryan out with his new hosting gig. 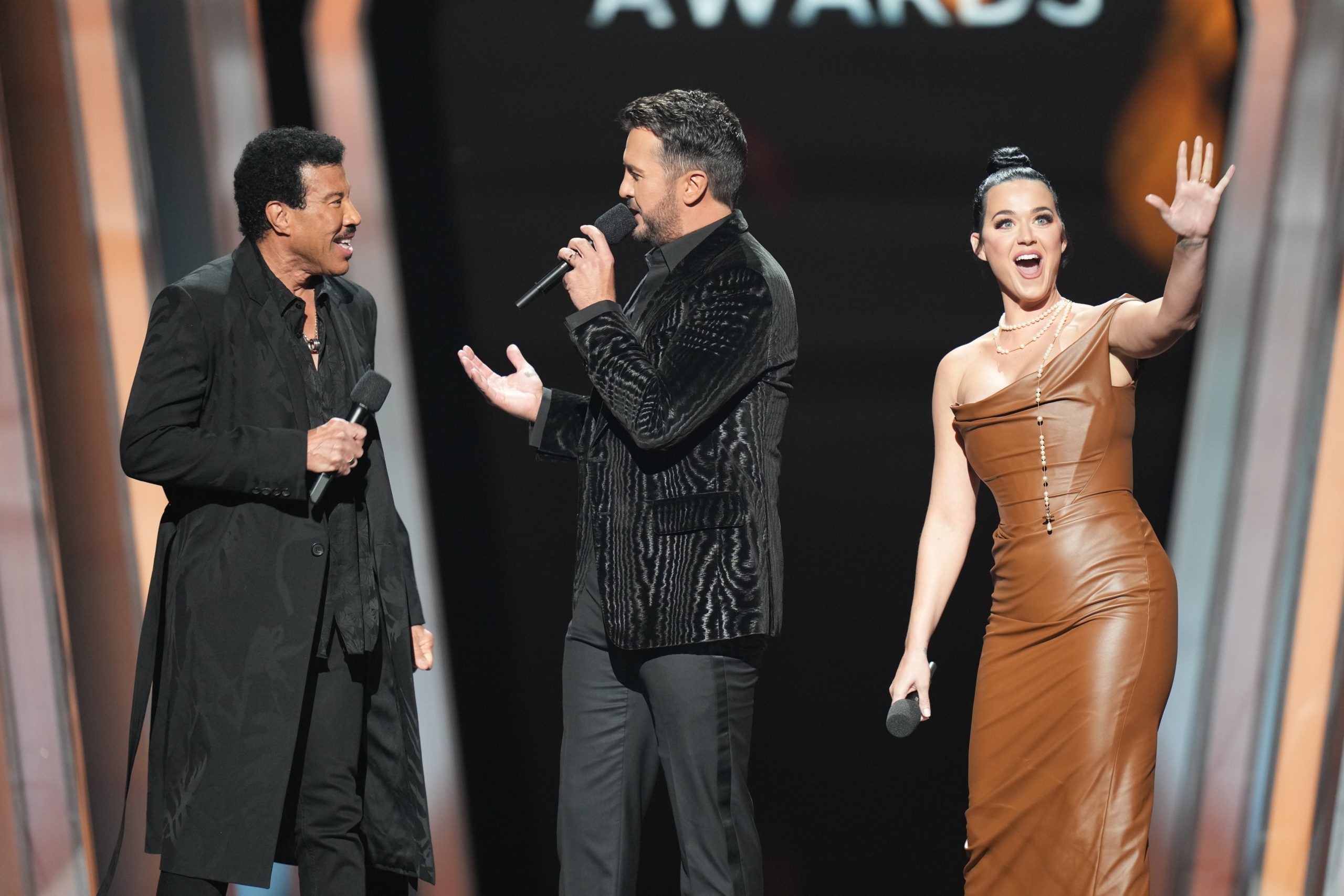 Stapleton, who with Eric Church was the most nominated artist of the night with five each, made his way to the winner’s podium four times last night. His first win went to him and songwriter Mike Henderson for their hit “Starting Over” winning Song of the Year. Stapleton spoke a few words, then turned it to his co-writer Henderson, who “showed [Stapleton] how to write songs.” The country songwriter shared the honor with his songwriting mentors, Gary Nicholson, Wally Wilson, Kevin Welch, and John Hadley.

Stapleton then won Single of the Year for “Starting Over,” Album of the Year for his project of the same name, and Male Vocalist of the Year. By the time the powerful singer accepted his fourth award of the night, he had run out of things to say.

At one point in the night, Stapleton showed off why he’s a CMA favorite with a sultry performance of his “Cold.” The talented musician, backed by his band and a string section, gave a flawless performance. As usual, the audience ate it up. He also backed Jennifer Hudson for a stellar tribute to Aretha Franklin. The two world-class singers did a rendition of “Night Life,” a song originally written and recorded by Willie Nelson and later recorded by Franklin, followed by a duet of “You Are My Sunshine,” the Jimmie Davis-penned classic that both Franklin and Nelson also recorded.

In a moment where audience members and fans at home were holding their breath, actors Susan Sarandon and Trace Adkins, who are both playing in Jason Owen‘s budding TV show Monarch, presented most controversial award of the night, Album of the Year. After a long pause filled with screaming fans anticipating the winner, the two announced that Stapleton beat out Church’s Heart, Carly Pearce‘s 29, Brothers Osborne‘s Skeletons, and most notably, Morgan Wallen‘s blockbuster album Dangerous: The Double Album. Wallen was not invited to attend the CMA Awards because of an incident that occurred earlier this year when a video surfaced of the singer using a racial slur outside his Nashville home. Despite being barred from attending the show, he was eligible to be nominated for categories that honor artistic works (Single, Song, Album, Musical Event, and Music Video of the Year categories).

“I want to say thank you to everyone who listened to the record,” Stapleton said of his album, Starting Over. “There was a lot of great records in this category.” 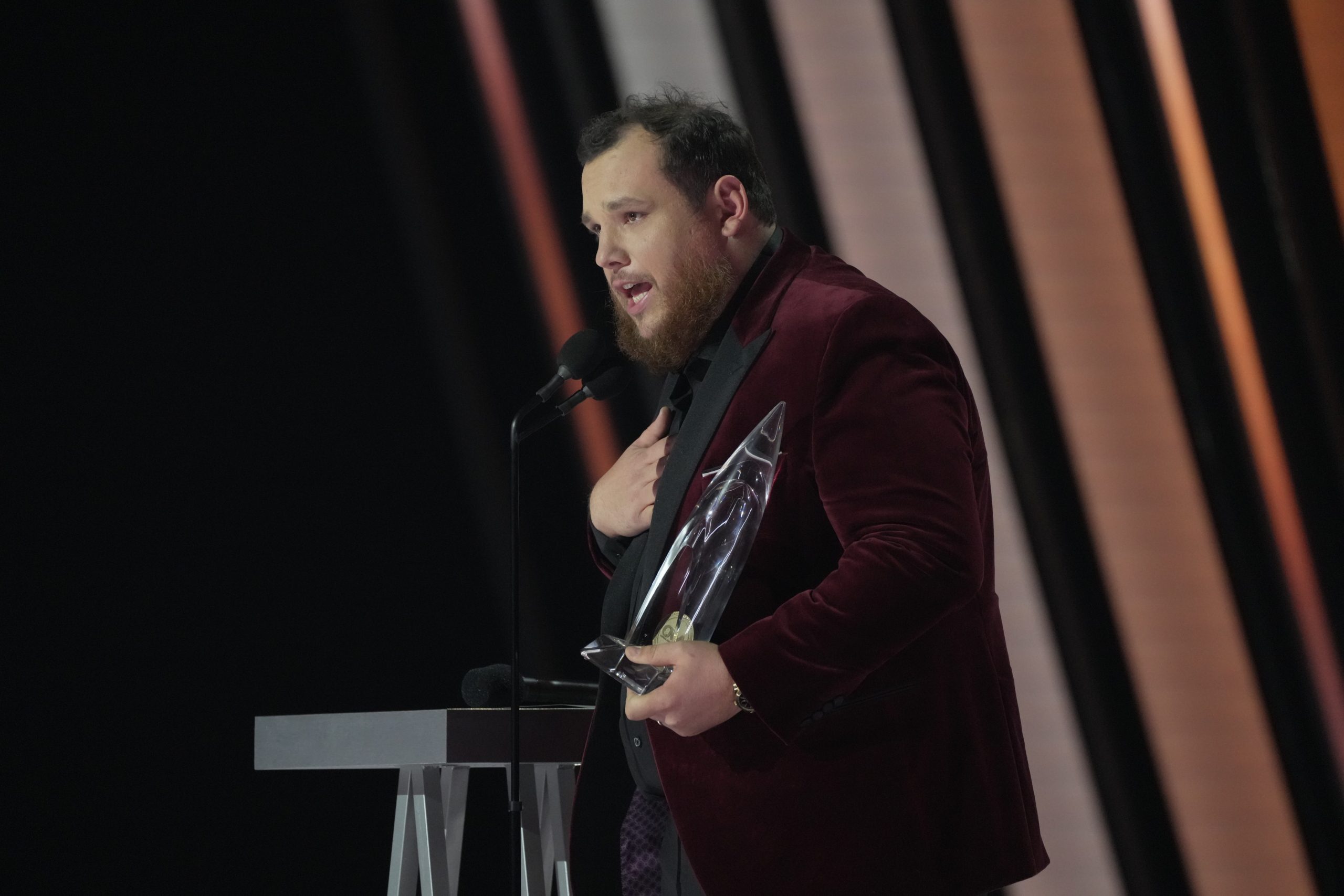 The only award that Stapleton was nominated for and didn’t win, Entertainer of the Year, went to a first-time winner. Alan Jackson presented the night’s top honor. The Country Music Hall of Fame member said, “I can tell you from experience, when you stand up here and they call your name, it really brings you down to earth to realize all the great people who have come before you like Haggard and Jones, Charley Pride, Loretta, Dolly Parton, Willie Nelson, and so many more.” He wasted no time pausing for dramatic effect when reading the winner’s name. Cheers abounded when he revealed that Luke Combs was the CMA Entertainer of the Year for the first time ever.

The artist was stunned. “I’m at a loss for words, Alan Jackson said my name…twice!

“I have never written a speech for something like this, which is not serving me very well right now. I just want to thank everybody in this room: the fans, every artist in this room,” Combs said. “I don’t deserve to win this, but I’m sure as hell glad I did. Thank y’all so much!” The young country star also debuted a brand new song last night, “Doin’ This,” which talked about what he would be doing if he wasn’t dominating the country charts.

Another first-time winner in their category, Carly Pearce took home Female Vocalist of the Year. Christian artists Amy Grant and Lauren Daigle presented the award to Pearce, and fellow nominee Ashley McBryde brought the emotional singer-songwriter up the stage. “There’s a lot of love, respect and admiration in this category,” McBryde said as Pearce gathered herself to speak.

“This is all I’ve ever wanted in the entire world,” Pearce said, thanking her team members before doubling over with emotion. 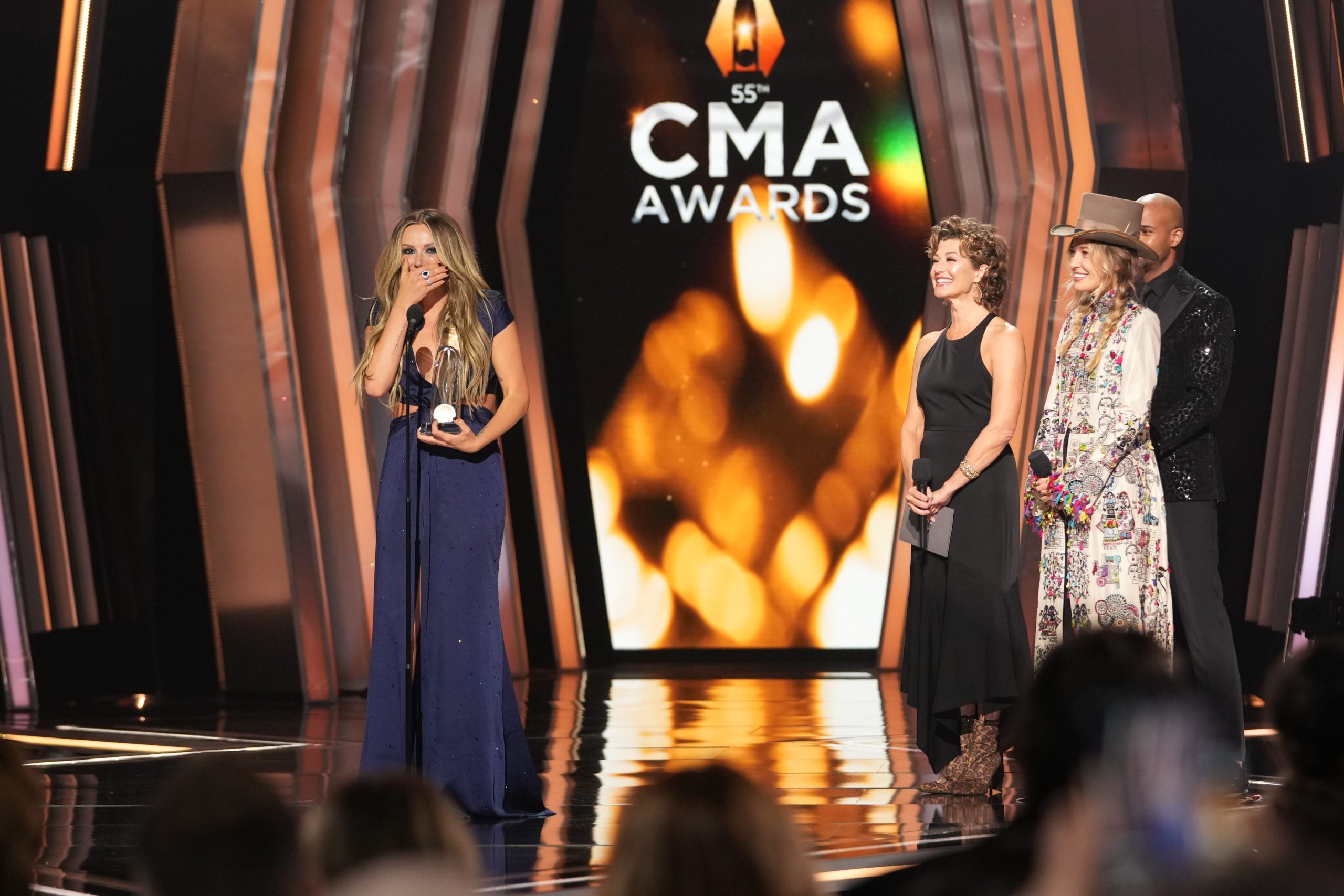 Other top winners included Old Dominion, who won Vocal Group of the Year for the fourth time and performed their latest hit, “I Was On A Boat That Day.”

Brothers Osborne clinched Vocal Duo of the Year for the fourth time, as well. Brothers TJ and John Osborne walked up to a thunderous applause when accepting their award. “It’s been a crazy rollercoaster of a year in so many ways, especially for me emotionally,” said TJ, who came out as gay earlier this year. “To have you all support me, it really does feel like love wins tonight.” The crowd went wild for both TJ and John, who later performed their song inspired by TJ’s experience, “Younger Me.”

An emotional Jimmie Allen was awarded the New Artist of the Year award. “Five years ago I spent my last $100 and came to the CMA 50th to watch Charley Pride perform on stage. And I got to perform with him last year,” Allen remembered before listing off his thank you’s. He gave a special shout out to Ash Bowers, who signed him after 10 years of hard work. Later on Allen showed off his vocal talent and skillful dance moves with a performance of “Freedom Was A Highway.”

Some standout performances of the night included a medley of hits from Miranda Lambert, the birthday girl, who kicked the set off with “Kerosene.” The high-energy performance included flames shooting up behind her that harkened back to her 2005 CMA Awards performance of the same song. She also played snippets of “Mama’s Broken Heart,” “Bluebird,” “Little Red Wagon,” and “Gunpowder & Lead” as the audience rocked along to her ambush of hits.

Gal pals Pearce and McBryde sounded great on their new duet, “Never Wanted To Be That Girl,” and Thomas Rhett, clad in a flannel shirt and jeans, gave a sweet performance on his “Country Again.” 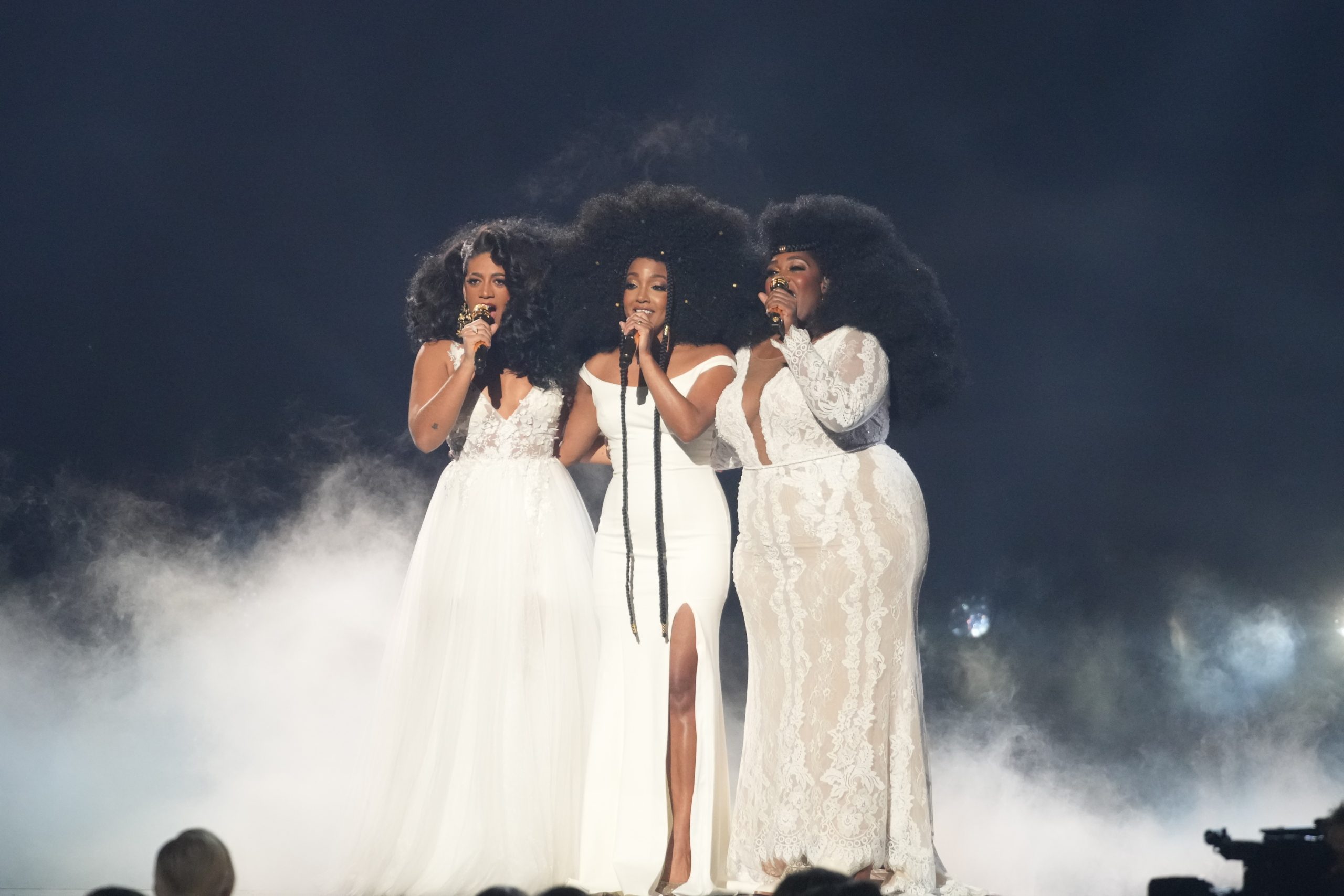 A young girl, Faith Fennidy, introduced Mickey Guyton‘s performance by letting the crowd know that Guyton’s ode to self-acceptance, “Love My Hair,” was inspired by Fennidy getting sent home from school because of her braids. “This next artist created this song to make sure girls like me feel seen and loved,” Fennidy said. “That’s how you turn something very painful into something very positive.”

Guyton was joined by Brittney Spencer and Madeline Edwards for the stunning performance. Guyton anchored the performance, while Spencer added gorgeous, honeyed melodies and Edwards lended her smokey, sultry voice for a stunning moment.

Musician of the Year, fiddle player Jenee Fleenor, backed country superstar Blake Shelton as he sang his rocking ditty about reincarnation, “Come Back As A Country Boy.” The CMA also awarded Sarah Michaud, PEOPLE Magazine’s Senior News Editor, with the 2021 CMA Media Achievement Award, which recognizes the outstanding achievements of print and internet journalists, columnists, authors, editors, television writers, producers and bookers and syndicated radio reporters in the media as they relate to country music.

Nominees Kane Brown and Chris Young preformed their infectious hit “Famous Friends” as yearbook photos of country hitmakers appeared on the screen behind the stars.

Overall, the night celebrated country music, its growing commitment to acceptance, and its emergence from the hardships brought on by the COVID-19 pandemic. To view a full list of winners, click here.