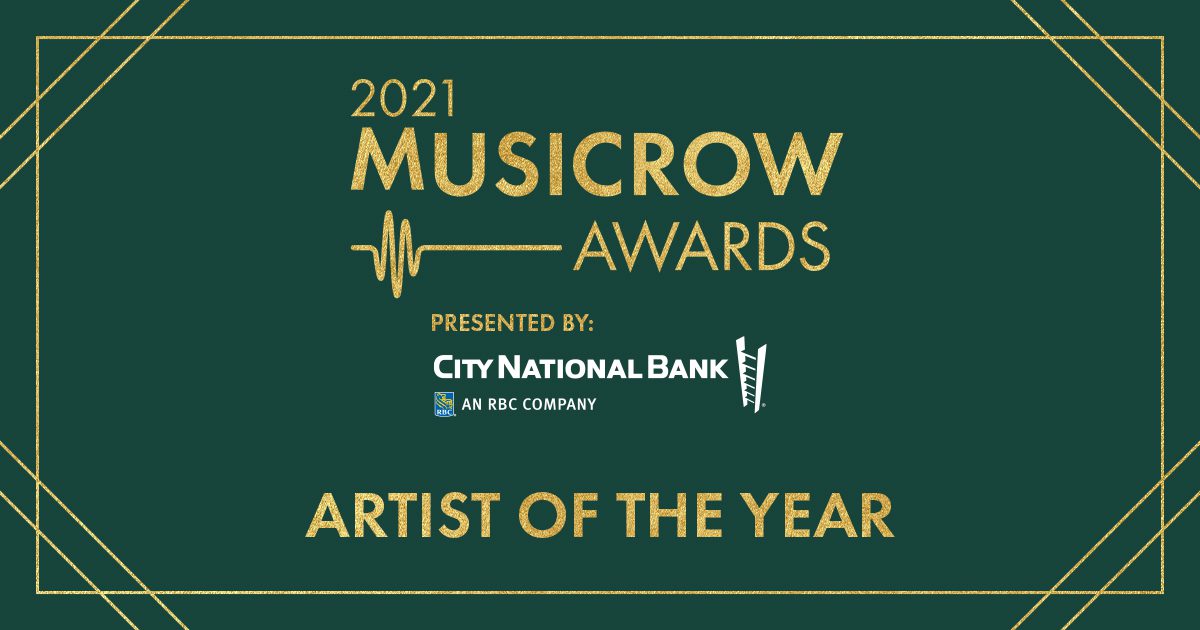 Following the announcement of this year’s nominees for the 33rd MusicRow Awards, we take a look at the MusicRow Artist of the Year category. This category is voted on by MusicRow’s subscribed members to honor outstanding achievements by a Nashville artist during the eligibility period of June 1, 2020 to May 31, 2021. 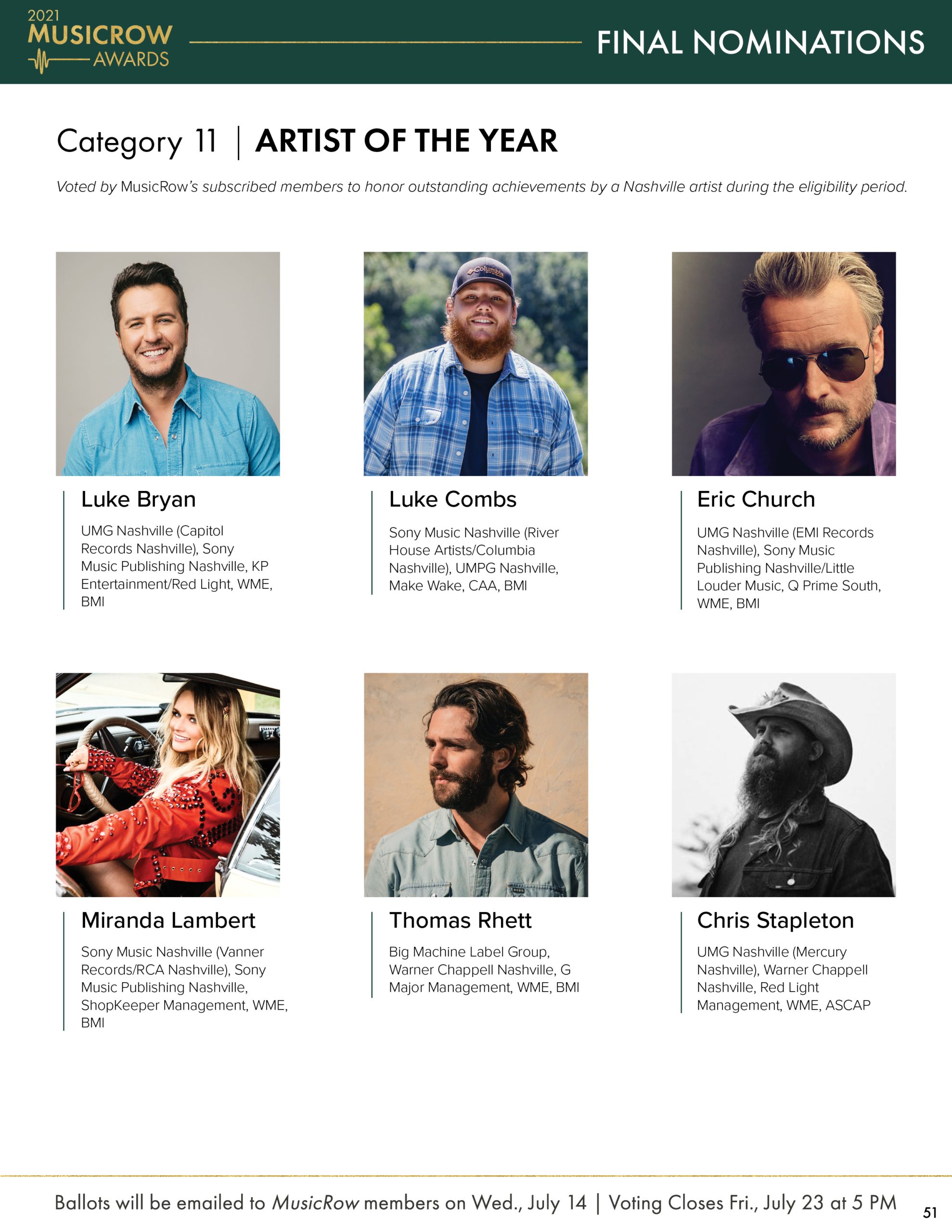 Luke Bryan is one of country music’s most multifaceted personalities: perennial radio hitmaker, television star, touring juggernaut. He is currently riding the success of new single “Waves,” the fifth single from Born Here Live Here Die Here (Deluxe Edition) and the follow up to the project’s already four consecutive No. 1s. Among his other ongoing accomplishments are the recently wrapped fourth season as a celebrity judge on American Idol, and adding the 2021 ACM Entertainer of the Year trophy to his collection. Bryan is gearing up to hit the road for his Proud To Be Right Here Tour in July, as well as bringing back his Farm Tour this fall. His new ventures include his first headlining run of shows in Las Vegas in 2022, and the upcoming Luke Bryan: My Dirt Road Diary five-part docuseries. Since his debut, Luke Bryan has garnered 26 No. 1 hits.

Luke Combs recently notched his 11th consecutive No. 1 single with “Forever After All.” It is also the 6th consecutive No. 1 from Combs’ deluxe album, What You See Ain’t Always What You Get. He is the reigning CMA and ACM Male Artist and Album of the Year winner. His massive fall headlining arena tour will feature a new in-the-round stage design. Combs will also perform his first ever headlining stadium show in Boone, North Carolina on September 4. Combs recently made history as the first artist to have their first two studio albums spend 25 weeks or more at No. 1 on Billboard’s Top Country Albums chart—breaking Taylor Swift’s previously held record at 24 weeks. Combs has been voted MusicRow Artist of the Year the last two years.

Eric Church is nominated in two categories this year: Artist of the Year and Song of the Year for “Hell Of A View.” The talented songman recently tallied his 10th career No. 1 with “Hell Of A View,” an endearing anthem about rebellious love featured on his critically acclaimed new triple album Heart & Soul. The project is the result of a month spent writing and recording a song per day while sequestered in rural North Carolina. The reigning CMA Entertainer of the Year returns to the road on his 55-city The Gather Again Tour where he will perform in-the-round sets for the first time in his career. Church’s longtime producer, Jay Joyce, is nominated for MusicRow Producer of the Year.

Miranda Lambert shined with versatility this year: releasing the celebrated The Marfa Tapes, continuing the success of her Wildcard album, and embarking on a wild night with Elle King on their infectious collaboration, “Drunk (And I Don’t Wanna Go Home).” Continuing to diversify, Lambert made history by becoming the first female country star to have a bar and restaurant on Broadway in Nashville when she opened Casa Rosa. She collaborated with Jack Ingram and Jon Randall on The Marfa Tapes and an accompanying film, which was recorded raw and loose with just a pair of microphones and an acoustic guitar. Lambert earned her third Grammy Award when Wildcard was named Best Country Album. Wildcard producer Jay Joyce, is nominated for MusicRow Producer of the Year.

Thomas Rhett transitioned from the pop/rock stylings of his previous albums with a return to his roots. Country Again: Side A was released on April 30, with Side B planned for release later this year. Lead single “What’s Your Country Song” marks Rhett’s 17th career No. 1 and 11th consecutive No. 1. Other hits from the album include “Country Again.” Most recently Rhett dropped “Things Dads Do,” teaming up with his dad Rhett Akins. His headlining The Center Point Road Tour kicks off on Aug. 13 with back-to-back nights in Orange Beach, Alabama. His producer Dann Huff is nominated for Producer of the Year.

Chris Stapleton released the acclaimed album Starting Over in November, launching both the album and the title track straight to No. 1. It is Stapleton’s second chart-topping single as an artist following 2018’s “Broken Halos.” Produced by Grammy Award-winning producer Dave Cobb, the record won Album of the Year at the 56th ACM Awards. Cobb is also nominated for MusicRow Producer of the Year. Stapleton has returned to the road with his extensive All-American Road Show. Among his recent highlights are joining forces with fellow Grammy Award-winner H.E.R. for a special performance of her single, “Hold On,” during the 2021 CMT Music Awards. Stapleton’s newest single, “You Should Probably Leave,” is Top 30 and climbing at country radio.