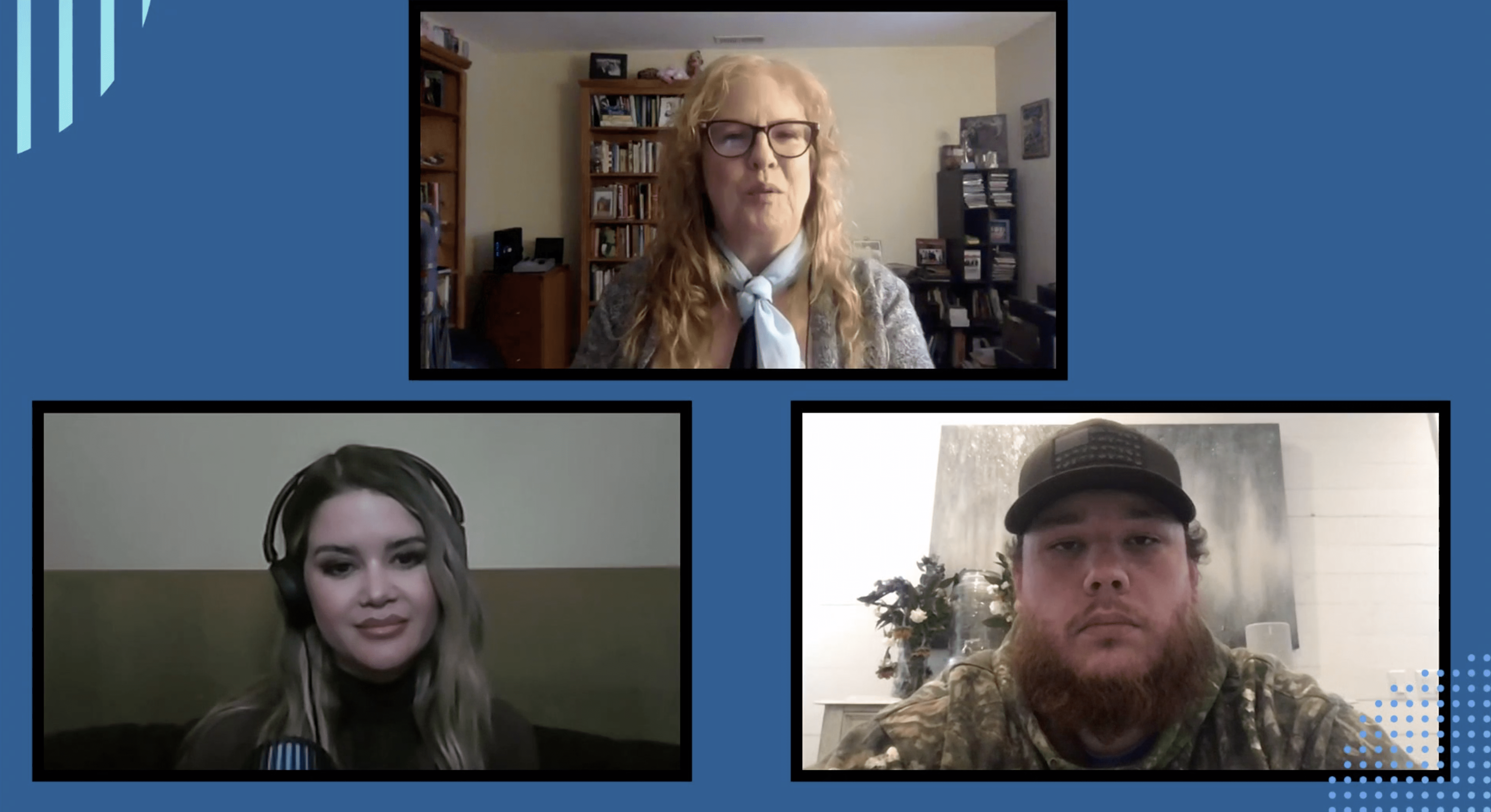 In an incredibly powerful conversation led by NPR Music’s Ann Powers, Luke Combs and Maren Morris acknowledged racism in the country music industry and spoke about their roles in helping to mend the genre’s complicated past and current issues. The CRS panel that featured the reigning CMA Male and Female Vocalists of the Year was sponsored by All Access.

Country Radio Broadcasters Exec. Dir., RJ Curtis, introduced the panel, saying that Combs and Morris raised their hands to participate in the discussion. “CRS believes this is a timely and important discussion,” he said.

The panel is very timely, following the events of Feb. 3, when a video surfaced of Morgan Wallen using the N-word outside his Nashville home opened up a national conversation about racism and racial inequity in the country music format.

Powers first acknowledged that the conversation, while important, is incomplete, as the participants were three white people.

Morris, who has historically been one of the most outspoken artists in the country genre, released a song in October, “Better Than We Found It,” that address racial inequity and racism.

“I really didn’t set out to be this activist, and obviously none of us are the authority on racism because we are white and existing as white people in a space that is historically rooted in a lot of racism,” Morris said. “It’s really hard for me as a white person to deconstruct all of that. The initial white fragility moment is, ‘I’m not racist, I haven’t done anything racist. I have friends that are Black,’ but I think that once I took that layer away, it’s liberating to not bow up anytime someone questions a motive or an action of yours. I’m still shedding that insecurity, that edge that white people—especially in country music—get when we don’t want to face the history of this genre that I would say we all love dearly.”

Combs, who has shied away from politically charged conversation, recently released a collaboration with Billy Strings that addresses division and conflict, called “The Great Divide.”

Combs commended Morris for speaking out, and admitted the risks associated with such. “Maren has obviously done a fantastic job of sharing her opinions and the things that she believes in, and I admire her a lot for that because that’s a big risk in the climate of our genre. It’s a hard thing to get on here and talk, to have these tough conversations because you’re nervous as an artist.”

Combs points out that the music industry has to acknowledge the problem of lack diversity and racism in country music. “Just saying there are things that need to change, taking a moment to be aware of that and knowing that there are problems that exist is the biggest first step that I have taken. The biggest first step that anybody out there in the industry that may be watching can take is just saying, ‘Hey, these things do happen. Let’s not sit here and say that they don’t, because they do.'”

At a very successful point in his career, Combs doesn’t want to miss his chance to take a stance on the issue. “I couldn’t just sit back and not do anything. I couldn’t not say that I want people to know that we as a genre care about this issue.”

Powers gave Combs the opportunity to talk about some images and videos of him where confederate flags were present.

“There is no excuse for those images. I’m not trying to say ‘This is why they were there and it’s okay that they were there,’ because it’s not okay,” Combs said. “As a younger man, that was an image that I associated to mean something else. As I’ve grown in my time as an artist and as the world has changed drastically in the last five to seven years, I’m now aware of how painful that image can be to someone else. I would never want to be associated with something that brings so much hurt to someone else. It’s not about history or this or that. This is something that hurts someone else.

“I want people to feel accepted, I want people to feel welcomed by country music and by our community. At the time that those images existed, I wasn’t aware what that was portraying to the world and to African American artists in Nashville who were saying, ‘Man, I really want to get a deal, but how can I be around with these images promoted?’ I do apologize for that, I apologize for being associated with that.”

Combs recognized that he is a highly visible member of the country music community, and that he wants to use his influence for good.

Morris and Combs both contributed to the conversation about the distinction between using hateful imagery like the confederate flag, and preserving southern heritage and legacy.

Morris said, “I think that’s what we’re drawn to when we fall in love with country music for the first time, is the nostalgia, the heartbreaking songwriting, the art of a lyric just cutting to your core. It’s about remembering.

“I’m from Texas. This is just sheer ignorance and privilege, but I did not know that the rebel flag meant what it meant until I was 15 or 16 years old,” Morris continued. “That ‘southern pride’ thing, and ‘the south will rise again,’ those were all just terms thrown around. There was no explanation behind it. I think a large majority of people who listen to country music don’t know that either, the deeper meaning of what that flag symbolizes. But maybe that’s just wishful thinking.”

Morris continued to say that she sees confederate flags in the parking lots of festivals that she’s played, and said that she doesn’t want to play those festivals anymore.

“If you were a Black person, would you ever feel safe going to a show with those flying in the parking lot? No. I feel like the most powerful thing as artists in our position right now, is to make those demands of large organizations, festivals, and promoters.”

Combs agrees with Morris that some country listeners may not fully realize the impact and full history behind confederate flag imagery. He equates it to, “Not having to grow up being afraid of that image, and not seeing that image as something that says ‘You’re not welcome here.’

“I never considered that up until 7 or 8 years ago,” Combs continued. “It’s not something that’s talked about a lot in the south. Maren is right, I’d like to think that most people are still unfamiliar with that. I’m not making excuses for anyone, because we can all grow and get better, which is what we’re trying to do here.”

Combs says that there are a multitude of other ways southerners can celebrate their hertiage.

“There are so many things beyond the rebel flag that we can do to be proud of being from the South. You can go plant a vegetable garden in your yard of heirloom plants that your family used to grow 200 years ago,” Combs said. “You can cook a meal that your grandparents made… You don’t need the flag to be proud to be from the South.”

Morris highlighted the often unsung Black pioneers of country music. “If we want to pride ourselves on being ‘three chords and the truth,’ then we need to be truthful with ourselves and know who started this genre, it wasn’t just white people. And going forward, making room [for Black creators]. It’s not to say or diminish my hard work or Luke’s hard work, but we have absolutely had more doors open to us from being white.”

She encourages people to learn the true history of the genre, and points out Ken Burns’ Country Music documentary for having helped her.

“Doing a deep-dive of history and knowing how this genre came to be is a really huge part of it,” Morris said. “I love country music so much. I have my version of it. Going forward, I want to pay respect to the people who actually built it for me.”

When the question was posed about how to help promote diversity and equity in the industry, Combs acknowledged the privilege that worked in tandem with his hard work and talent, and challenged the industry to make sure they’re giving aspiring artists and industry members of color a fair chance.

“I’m not diminishing anyone’s accomplishments. I worked my ass off to get where I am, and so did Maren. But, like she said, it’s impossible to not say we’ve had it easier than our Black counterparts, or I had it easier than Maren, my female counterpart. It’s undeniable. For me to sit here and tell you that– that’s not true, would be a lie.

“If you’re a publisher and a Black writer comes in, are you giving them the same look that you’re giving me if I come in? I’m not accusing anyone of anything, that’s not what I’m saying, I’m just saying take a minute of your day and think.”

Powers brought up another observation regarding the conversation surrounding Morgan Wallen. Powers pointed out that country artists often get accused of causing a rift in the ‘country music family’ when speaking out against hate.

Morris says we strengthen the country music family by holding each other accountable. “This isn’t about going after people or a fan base for sport,” she said. “What is going after someone, saying ‘The N-word is bad’? That’s the least we can do.

“I appreciate Morgan for saying ‘quit defending me’ to his fans, because it’s indefensible. He knows that, we know that,” she continued. “This whole ‘We’re a family, we’re protecting our own,’ is protecting white people. It’s not Black people.”

Morris summed, “If you love something, you should absolutely call out the parts that are complicit and wrong, so we can move forward in a healthy way.”

“We want to be stewards of our genre, because we’re proud of it,” Luke summed. “You do hear ‘country music is a family,’ and I do believe that more than anything, but I want it to be a family that everyone feels like they can be a part of.”