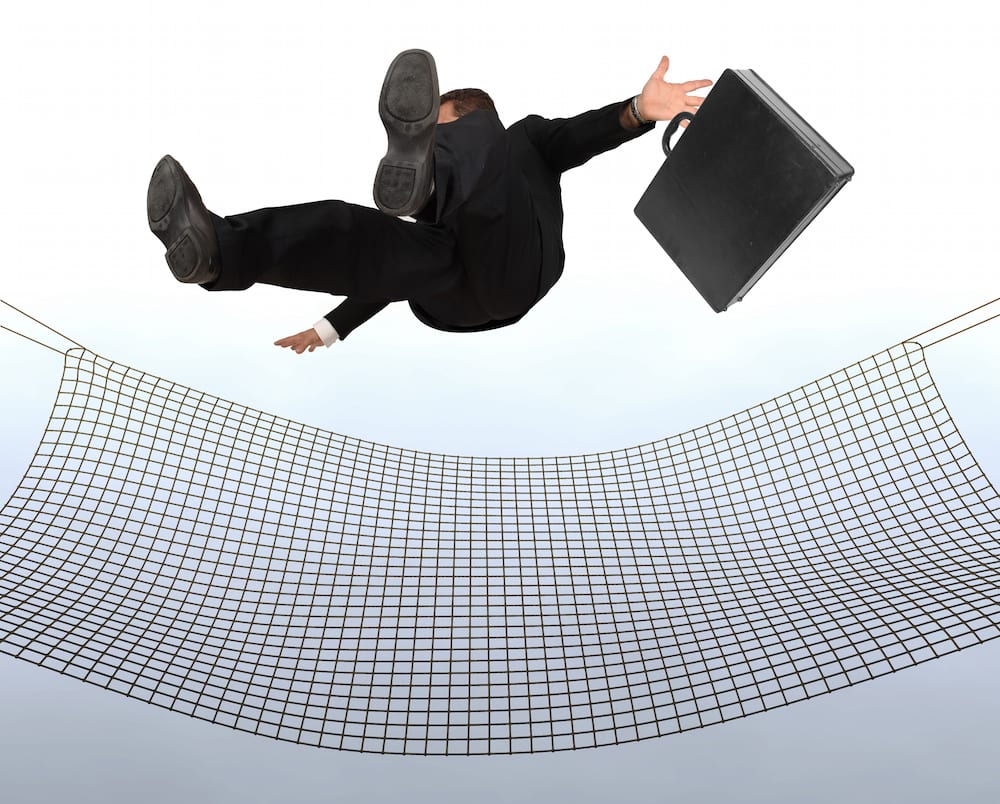 One of the traits I often envy in other entrepreneurs is the ability to throw all the chips on the table without a safety net.

While I would love to be more like that, unless I have an idea that’s a proven concept or doesn’t require a big financial or time investment, I have a tendency to gingerly approach the path and slowly increase my wager as I see positive results. While that has worked for me, there’s something really admirable about people who go all in, risking everything, with a “do-or-die” mentality.

I’ve seen that philosophy produce both skyrocketing and unimaginable successes, as well as nosediving falls. But I believe despite the fears and bruises, the rewards are often sweeter.

Safety nets have a very important role in navigating one’s career path. They allow you to step out on the edge, take some chances, with the comfort of knowing you won’t lose it all if it goes south. But something I’ve realized lately is that while a net can save your ass from falling and hitting the ground, sometimes it can actually be causing more harm than good, despite your best intentions.

Do you have a safety net in your life that is keeping you from flying?

We’ve probably all learned many lessons about having safety nets during this pandemic. When I first started out in my career, I recall the goal of having an emergency fund of 4-6 weeks to cover personal expenses was pretty standard practice. Looking back, it seems rather inadequate as a standard measure, even for back then. These days, financial gurus such as Suze Orman often tout a minimum eight-month emergency fund claiming it can take that long to find a new job. While she may not have ever mentioned it being needed in a pandemic, the logic is the same and during these past 10 months, many have had to deplete their emergency funds.

But not all safety nets are financial.

I actually started my career as a safety net of sorts. When I decided to major in accounting with plans on becoming a C.P.A., I wanted something that would be a safe bet in finding employment. Deep down, I always wanted to own my own business, but I have a natural aversion to risk. Before I started college, I knew every company in existence needed accountants. Those seemed like pretty good odds to me.

I figured I could always learn other aspects of a business through experience so getting my C.P.A. was the safety net I wanted. Fast forward 15 years later, my employer at the time, Arista Records, merged with another label, and I received the proverbial pink slip. I was shocked to find out that afterwards, my phone didn’t continuously ring with new career opportunities. I expected my safety net to save me, but it didn’t. I enjoyed working in many aspects of finance and I was good at it. I’m grateful for the experience and how my career path led me to where I am today, but that net didn’t keep me from getting bruised. It didn’t keep me from having a few really lean years. It didn’t give me security. And in the end, I realized it wasn’t a net after all.

Other safety nets can appear as ‘mental nets’ or attitudes. Those can keep you from taking action or make you act in ways you shouldn’t. And perhaps the worst part is they can get intertwined with the most harmful enemy of anyone wanting success… fear. Unlike fear, they have a very beneficial-looking appearance but are really nothing more than piles of junk getting in your way of success, all while being fully cloaked in something that appears to be for protection.

Have you ever noticed how our junk in our homes starts to really stand out when you are having guests coming over? You can have clutter sitting around in a room and over time, it blends in and you no longer even notice it. But then you have a visitor planning to come over, and all of that same clutter now appears to have a spotlight shining right on top of it, creating an urgency to get it cleaned up before your guests arrive. And similar to that untidiness, it’s important to periodically look around and take inventory of any safety nets that have also become clutter.

The first step is to figure out what safety nets are, indeed, working for you and serving an important purpose. Protect those and reinforce them. But perhaps even more importantly, determine which ones that aren’t safety nets at all. You’ll start to notice nets that have been in your life so long you no longer even remember they are there. It can be quite exhilarating when you start recognizing those that are standing in your way of reaching your potential and you cut them loose.

Once you identify a safety net that isn’t providing you with any safety, how do you let them go?

I admit it’s hard to let them go.

I often cling to them with white-knuckled fists. One of the nets I’m loosening my grip on right now is having everything at the magazine go through my final review. I’ve realized that I made my “review” my own self-appointed safety net at MusicRow. But even though our team members excel with their strengths, I still felt the need to have everything pass across my plate. I thought I needed that safety net in place. But that kind of net easily becomes a dam with productivity getting tangled in the lines, preventing progress from moving forward. It impedes success, rather than produces it.

Have you ever seen a tightrope walker at a circus slowly walking across a thin wire high above the net? Or perhaps trapeze artists spinning, swinging and flying through the air? What happens when all of a sudden the safety net is removed and the crowd exalts a collective gasp? Do they fall? Do they fail? No, they do not. That’s when they soar. That when they succeed at death-defying acts. In other words, that’s when the shit gets really good.

One of my favorite people to learn from is Steve Harvey. He’s a comedian, an author, a host, a presenter, a broadcaster, a businessman, a life coach, an ambassador and so much more. His accomplishments would fill up a book and he’s a masterful teacher. One of the most inspiring messages he’s given was an impromptu video as he was getting in his car one day and driving off. It’s a message I listen to repeatedly and try to remember often. He said, “If you want to be successful, here’s the thing you have to do. You have to jump. There is no way around it. Every successful person has jumped. You’ve got to take a leap of faith. You’ve got to dash off that cliff and you’ve got to jump out there as far as you can.”

In other words, get rid of that false safety net, often tangled up in fear, that’s holding you back.

Harvey goes on to say, “A lot of times you stand on the cliff of life and you see other people soaring by. And you know why? Because their parachute opened. But the only way you can get your parachute to open so you can soar is you’ve got to jump. And If you do not jump, I promise you one thing. Your parachute will never open. You’re safe, but you will never soar.”

Here’s to all of us soaring… and losing the net.

Off The Record is a new weekly column in 2021 from MusicRow Owner and Publisher, Sherod Robertson. After 10 years heading the publication, he shares some of the nuggets of wisdom he’s acquired throughout the years that have helped him in his journey. The views and opinions expressed here are solely those of the author and do not necessarily reflect the views of MusicRow Magazine nor its team members.

Prior Installments:
Off The Record: What Is Your Word For 2021?

Off The Record: Show Me The Receipts!