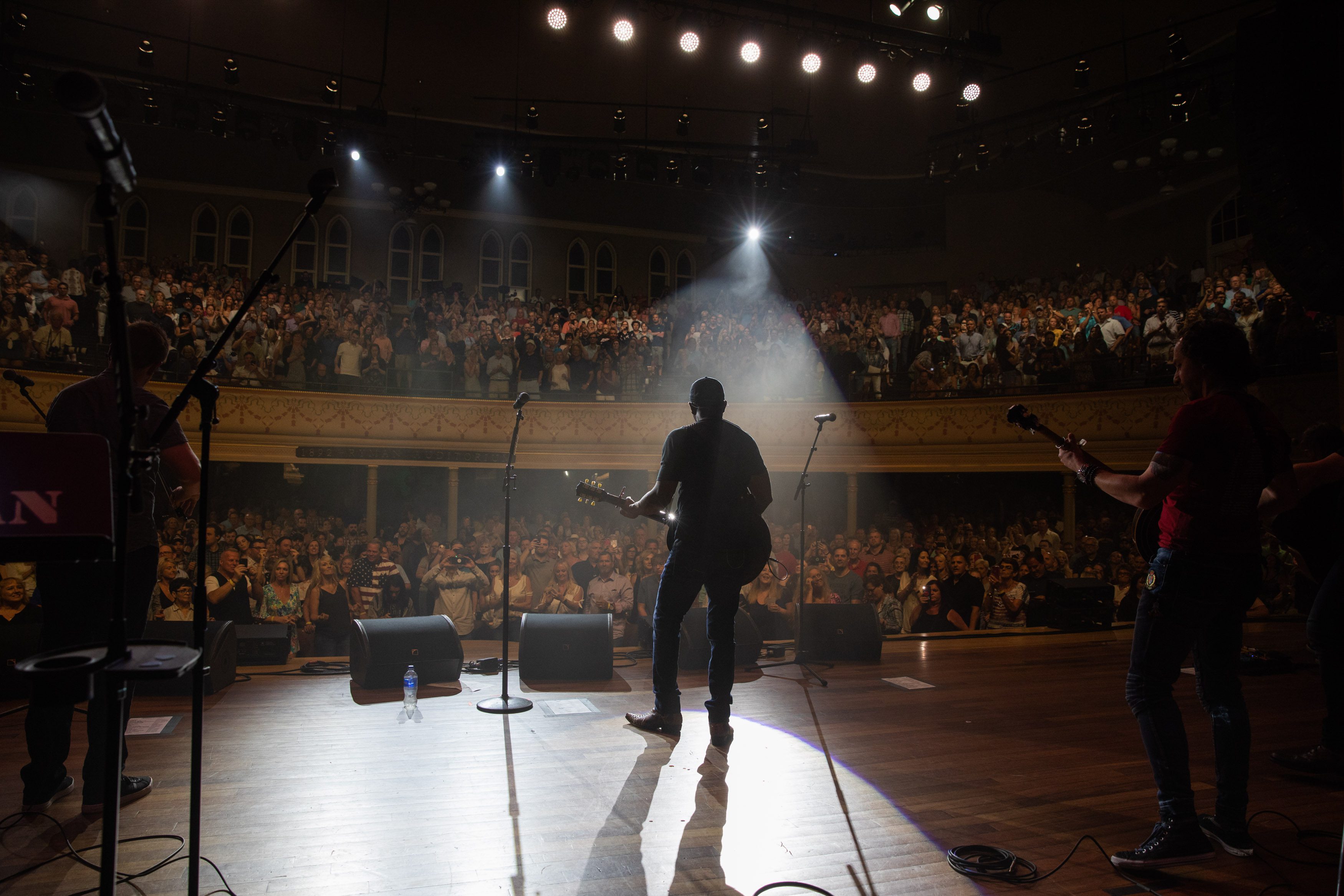 Rucker set the feel-good groove early in the night, kicking off the show with his 2009 hit, “Alright.” In his blue jeans, t-shirt and ball cap, Rucker’s contagious smile lifted everyone to their feet to dance with him. “Let’s play some country music!,” he said. “We’re at the Ryman!” Rucker transitioned from Tracy Lawrence’s “Time Marches On,” to his most recent No. 1, “For the First Time.”

Rucker then introduced his first guest, country rocker Travis Denning. Denning started out with his new single, “After A Few,” and followed it with his ode to the fake-ID-days diddy, “David Ashley Parker from Powder Springs.” The crowd liked him, but when he went into the Allman Brothers’ iconic hit “Ramblin’ Man,” they loved him. The crowd ate him up, and the band grinned onward as Denning shredded on his electric. Denning left the stage with a standing ovation.

Rucker returned to the stage to introduce his next friend. “There’s legends and then there’s legends,” he said. Nine-time Grammy award-winning Sheryl Crow ventured out to join him.

“Howdy!” she said, channeling her best Minnie Pearl. Crow quickly got everyone swaying to her Cat Steven’s cover “The First Cut Is the Deepest.” Hands flew up in the air with her massive hit, “Soak Up the Sun.” Crow smiled as she said, “This is my favorite place in America to play!”

Once Rucker was back to center stage, he played a sultry album cut from his latest record When Was the Last Time, titled “Hands On Me.” After following it with “Radio,” it was time for Rucker to introduce his next guest.

“This dude makes me laugh so hard,” Rucker said as Jimmie Allen walked out on stage to join him. Clad in a Clint Black t-shirt, Allen crooned on his debut No. 1 single, “Best Shot.” 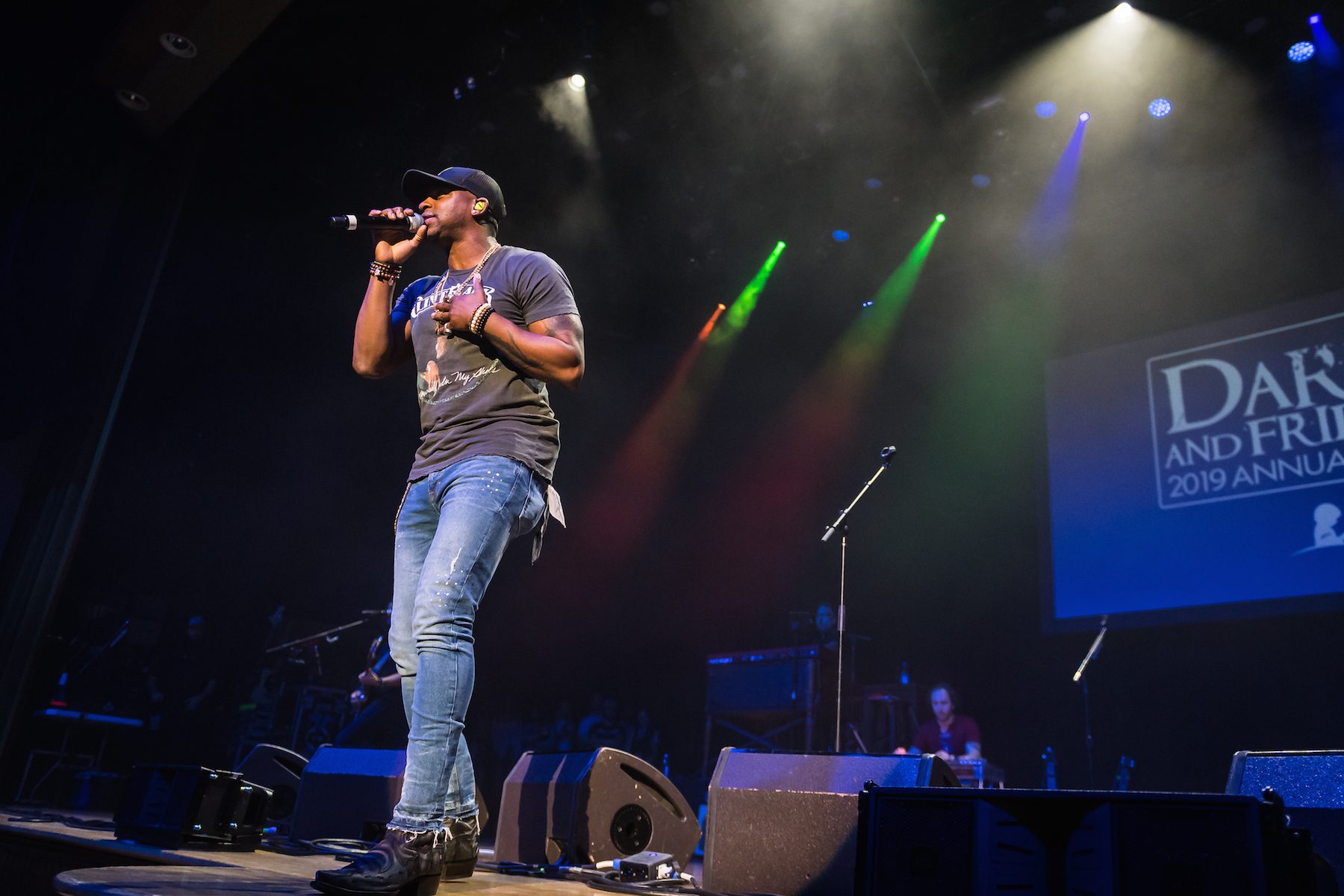 Venturing into the crowd is becoming somewhat of a habit for Jimmie Allen. The BBR artist made his way through the Ryman aisles as he performed a Matchbox 20 cover, “Unwell.” Allen paid his respects to Rucker, and said, “I’m not brave enough to step onto the golf course with him, but he can put some Jordan’s on and I’ll take him on the basketball court.”

Rucker laughed and told him to get his skinny jeans off the stage.

Next up was Capitol label-mate Luke Bryan. After he performed his newest single, “Knockin’ Boots,” he coaxed Rucker back out on stage to take a shot. Bryan toasted Rucker for his work with St. Jude, and for being a good person. Appropriately, Bryan then went into his hit “Most People Are Good.”

After finishing with the whole crowd on their feet, shaking it with Bryan for “That’s My Kinda Night,” Bryan headed backstage.

“Homegrown Honey” was the next Rucker No. 1 on deck, followed by “Come Back Song.” At this point, the whole crowd was dancing, pointing at their significant others for the epic choruses, and beaming up at a smiling Rucker.

He then introduced Big Machine hitmaker, Brett Young. Young serenaded the crowd with his first Platinum hit, “Sleep Without You,” followed it with his 2x Platinum smash, “Mercy,” and concluded with Marvin Gaye’s “Let’s Get It On.” When Rucker returned to the stage, he joked, “I don’t like men, but I was backstage thinking that guy is attractive.”

Rucker then turned to another new hit-maker on the scene. The crowd roared as Kane Brown walked into the spotlight.

With a fiddle player added to Rucker’s incredible backing band, Brown played his fun “Short Skirt Weather” and then transitioned into a cover of Randy Travis’ “Three Wooden Crosses.” He finished his set with the crowd screaming the words to his latest No. 1, “Good As You.”

When Rucker ventured back out, he commended Brown for his work and for his place in the industry. “When I came to Nashville they told me it would never work. It worked. That kid is about to explode the world,” he said of Brown. 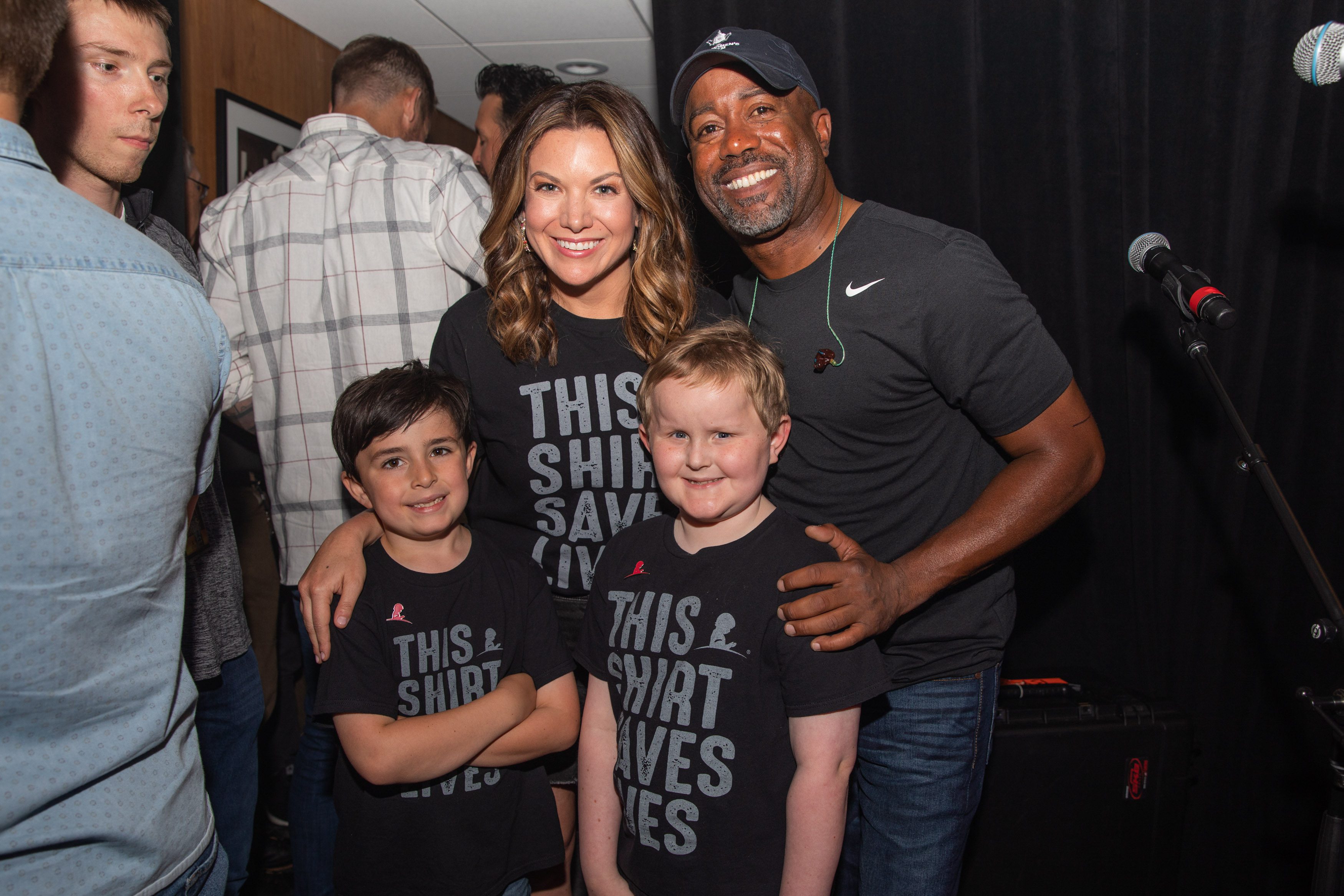 Before the final song, Rucker thanked everyone for coming and making the event so lucrative for St. Jude every year. “This event sells out in minutes every year, and no one even knows who is friggin’ playing yet!”

Rucker and all his friends came together to join voices for Rucker’s mega-hit “Wagon Wheel” to close the night, kicking off CMA Fest with a fun, spirited country music hoo-rah.