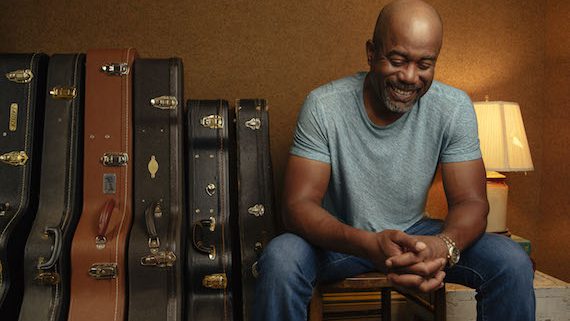 Darius Rucker’s gravel-meets-velvet voice has launched chart-topping hits in both the pop and country spheres (not to mention countless sing-alongs) since he launched his career as the lead singer and bassist for Hootie & The Blowfish in the ‘90s, with classics such as “Hold My Hand” and “Only Wanna Be With You,” and later became one of country music’s most distinctive voices with solo hits such as “Don’t Think I Don’t Think About It,” “It Won’t Be Like This For Long,” and the country radio evergreen “Wagon Wheel.”

Tonight (May 7), Rucker will be honored for another endeavor close to his heart—his ongoing efforts to help children. Rucker is this year’s recipient of the Harry Chapin Memorial Humanitarian Award at tonight’s Music Biz 2019 Awards and Hall of Fame Dinner in Nashville. Rucker says he was more surprised than anyone to find out about the honor.

“You do your thing and you try to help people as much as you can, and you don’t care if anyone is watching, but then you find out people are looking and respect the work you are doing for others. It’s cool,” he tells MusicRow.

On June 3, Rucker will host and headline the Darius & Friends concert at the Ryman Auditorium. Rucker has hosted the concert in Nashville for the past decade; to date, the event has raised more than $1.6 million. He was inspired to launch the concert after visiting St. Jude Children’s Research Hospital in Memphis in 2008.

“We went by and talked to the kids and their parents. I thought that it would be cool if we could start doing something to help. And there are always kids that you met years ago, that you see today and they made it through treatments and they are doing well and living life. It makes me so happy for them and their families. ”

“We go to it every year, so there are so many people I know, so it’s helping people on that level, people I know,” he says. “It’s good to see these kids walking around with their backpacks and knowing they have all the supplies that they need.”

Rucker says that each year, they try to pick a different area around Charleston.

“It really is a location thing,” he says. “We try to help the areas each year that need it the most. It just keeps growing and that’s a good thing.”

It was at nearby University of South Carolina where Rucker and three friends formed Hootie & The Blowfish, growing the ensemble from frathouse favorites to a worldwide musical touchstone. Since releasing 1994’s Cracked Rear View, the group has sold more than 25 million albums to date, while Cracked Rear View earned Diamond certification from the RIAA.

Later this month, Rucker will reunite with his Hootie bandmates for their Group Therapy Tour, marking their first full-scale tour in over a decade. The group also announced they had signed with UMG Nashville, the label home to Rucker’s solo country career, and will release a new project later this year—their first since 2005’s Looking For Lucky.

“We are doing one or two songs from the album on the road, but we really just got the record finished and it should be out later this year,” notes Rucker, who says he also has plans in the works for his sixth solo country album (the follow up to 2017’s When Was The Last Time), which he hopes to release in 2020.

“I’m dealing with the same folks now with me and the group, and I love being able to do this with everyone at Capitol and UMG,” he says of his Nashville family. “It definitely helps with timelines and makes everything much easier. It’s been fun; we love getting back into it and we are looking forward to going on tour.”