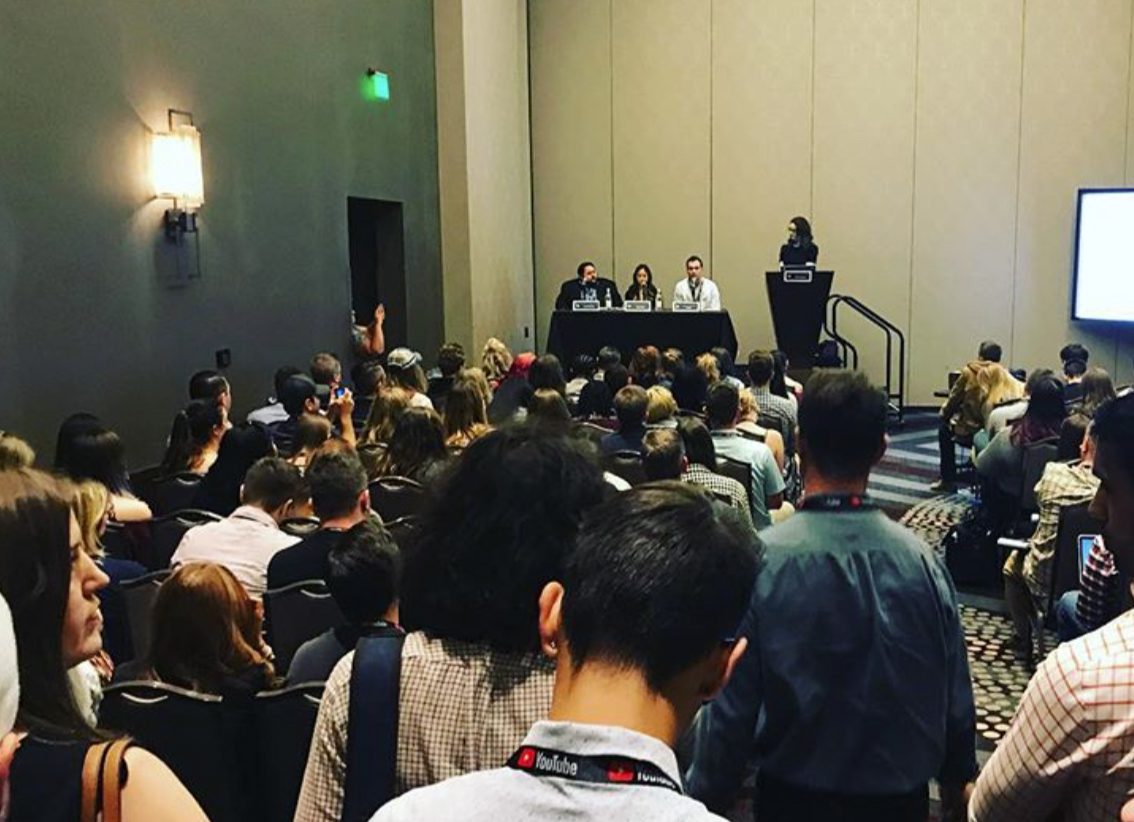 “You’re never gonna make your money back [promoting] a song,” said Grotticelli, to which Ortmeier explained. “If you’re releasing one single, we never just push to that three-minute track,” she said. “We always push to a playlist that’s often named for an album or single, but doesn’t stop with one song. It’s about 25+ songs that take the user on a journey.”

“With Linkfire, we’ve been playing around with a lot of re-targeting strategies,” said Pham. “Really honing in on current fans. So we track down who views video up to a certain percentage, and practice ad sequencing.”

“If your trying to objective is to drive to streams, follows or playlists, then you should make it as seamless as possible to get there,” said Faurfelt. “One thing we suggest is removing the full video on your landing page.”

“One ad does not serve everybody anymore,” said Grotticelli, explaining how various ads are used throughout the promotion process.

“You’re not going to see the same message for six months, you’re gonna see nuances,” noted Ortmeier of ad fatigue. “There’s a balance in how many times you have to be hit with a message before you take an action.”

“We want the consumer to see our ads three times on the same platform, but not more than that,” reported Pham.

“It’s interesting because if you’re selling a ticket, you could move your objective to try to upsell to a VIP experience or sell some merchandise afterwards,” said Faurfelt of ad tailoring.

“When we started [in this industry], people were optimizing for CPC (cost per click), thinking that if you clicked on a link then you were interested,” said Faurfelt “Maybe you just had fat fingers, and that wasn’t the case. It’s really what happens after you click.

“iTunes let’s us measure the impact of the traffic we’re sending there,” he continued of his company, who recently secured a partnership with Pandora to provide data insights. Adding to those third-party sites such also including Ticketmaster.

Grotticelli similarly praised Google/YouTube, Spotify and socials like Facebook, for the availability of that data. “If we get more data from your company that our ads work, we will serve more ads to you,” he declared.

“But we have touring data, merchandising data, streaming data, download data, how do you combine all those in to one dashboard,” asked Faurfelt of fragmentation challenges. “Or you have to think about the bounce rate. It may be that it’s not the right time for the fan to engage,” he continued. “You don’t want to shove things down [a superfan’s] throat because they’re going to find your content anyway, or at a different time. So success lies in interpreting all those signals that you can’t track all the time.”

“To be honest, we can’t put together a perfect ROI on streaming advertising just yet,” admitted Ortmeier, of all those struggles.

“We’re so fragmented,” Grotticelli concurred, citing the wide availability of digital music today. “But you’re talking about a label [UMG] that sold a ton of physical product with George Strait and Alan Jackson exclusives. It’s about taking a wholistic approach to marketing. By itself, in a silo, I don’t think any of this works—digital, traditional, billboard. But if I served you an ad and you saw a billboard, maybe there’s a chance you’d engage in the playlist.

“Email is still very valuable,” said Ortmeier. “We can also advertise against or exclude people that are already on your list.

“We actually have a text that goes out every Friday with new playlists and the growth has been great, and unsubscribes have been really low,” she continued. “We don’t engage [texts] that often, because you can burn people very quickly. It has to be a very engaged consumer.”

“We primarily do geo-targeting with tours,” said Ortmeier. “We’ve done a lead-in saying, ‘Before you go, listen here.’ The engagement was really positive around it—friends were tagged they were going to the show with. Afterwards, we turned around to, ‘Relive your experience and listen again.'”

“[Geo Targeting] has been a really successful model for new artists,” said Grotticelli. “But it’s really venue specific if people are going to buy tickets digitally, or that day.”

“You can also do geo-targeted social posts, so it’s not just limited to ads,” added Pham.

“We’ve studied all Ticketmaster sales and we’ve been able to day-part when sales are made,” she continued. “Facebook and Google search are top drivers, and we found people buy tickets when they’re at work. And people like to buy on desktop.”

“It all starts with the artist,” said Grotticelli. “We do not move until the artist says. If they want to be in the forefront, it’s up to them. You’ll see Kip Moore talking to his fans, or Keith Urban and his wife that’s super organic. We’re not telling people to break down the third wall—if you want to keep mystery, that’s okay. Sam Hunt’s a great example of that.”

“Artists less engaged socially is where we usually need to do more advertising,” realized Ortmeier. “Because we need to keep them in the conversation.”