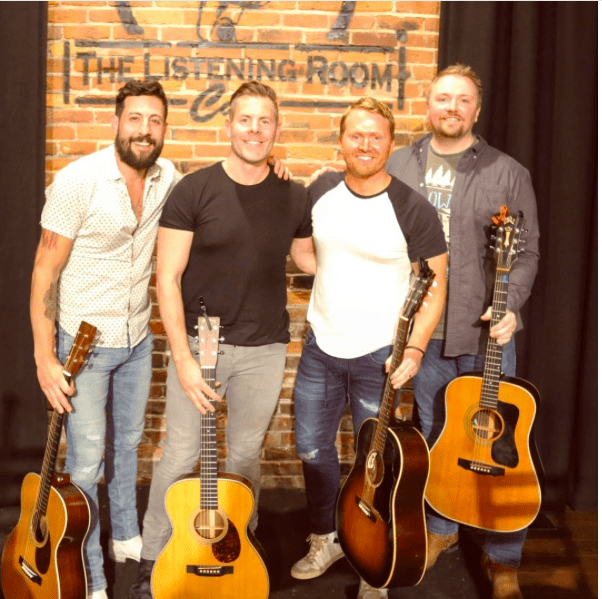 This week, Nashville-based company SMACKSongs, led by writer/producer Shane McAnally, Josh Osborne, Michael McAnally Baum, Robin Palmer and Robert Carlton, was honored with five CMA Triple Play Awards. McAnally was honored with two trophies, which celebrate the six No. 1 songs he had a hand in writing which topped the charts in 2017. Fellow SMACKSongs writers Trevor Rosen, Josh Osborne, and Matt Ramsey were also each honored with a CMA Triple Play award, for penning three songs each that topped the country charts in 2017.

“The whole concept of the Triple Play is a really cool way to acknowledge songwriters,” Shane McAnally tells MusicRow. “It’s so hard to get a No. 1 song. It takes so many years, and so many relationships, so much has to fall in your favor, and then for that to happen three times in a year… lot more goes wrong for songwriters than right. People think that every time we write a song, it gets cut, and every time it gets cut, it’s a single and it must go to No. 1. There are so many other songs that don’t get there.

With five Triple Play awards for four writers, SMACKSongs leads the independent publishing community with the most awarded songs and writers for the 2017 CMA Triple Play Awards.

McAnally was honored for “Different For Girls” (Dierks Bentley), “I Met A Girl” (William Michael Morgan),  “Body Like A Back Road” (Sam Hunt), “If I Told You” (Darius Rucker), “Drinkin’ Problem” (Midland) and “Unforgettable” (Thomas Rhett).

Osborne was honored for “Setting The World On Fire” (Kenny Chesney/Pink),  “Body Like A Back Road,” and “Make You Miss Me” (both recorded by Sam Hunt).

The Triple Play honors cap off an admirable past five years for SMACKSongs. In that time, the company has earned 39 total No. 1 songs. That number does not double-count songs written by more than one SMACKSongs writer.

“The four of us are great friends. We are family,” McAnally says of his fellow SMACKSongs writers. “We were working together in several capacities. Trevor was the first writer I ever signed [to SMACKSongs]. Josh has only been here a couple of years and we had a lot of success with him even before he joined. We wrote together and it seemed like a natural fit. Same with Matt Ramsey.

“I think the timing was just right for all of us. It may not be forever. I would love to think that it is, but I’m also realistic enough to know that I would rather have them as friends than us stay too long in a business partnership. As artists grow up and as Old Dominion becomes such a viable machine of making hits, those guys may see other reasons to develop their own thing but for now it’s been a great relationship.”

It’s not lost on McAnally the irony that two of his Triple Play honors come from songs that reside at opposite ends of the country-pop spectrum, with William Michael Morgan’s “I Met A Girl,” and Sam Hunt’s smash “Body Like A Back Road.” He says country music’s current landscape mirrors where the country is politically.

“What seems to be happening is the great divide,” he says. “Things are going, which is honestly sort of reflective of what is going on politically. There’s not a lot of middle and I think that anything that is safe or in the middle right now, you might have a radio hit, I don’t know that it’s building careers, though. What is building careers are people that are far to the left and far to the right. The more pop we get, the countrier we get. I think that’s just what happens when one side gets real extreme, the other side does, too. People say, ‘Oh, it’s getting traditional again.’ It is, but with that come the answer another way.”

Though the spectrum of production choices in country music continues to broaden, McAnally says it is the stories behind the songs that keeps the music unified. He offers “I Met A Girl,” which he co-wrote with Rosen and Sam Hunt, as an example.

“We had been trying to write for Sam’s first record. During the process of making Sam’s first record, writing that song felt like a pivotal moment. When we did the demo for ‘I Met A girl,’ we really started to find a sound. We thought that song was an integral part of that, but what happened was it kicked down the door to go on to songs like ‘Take Your Time.’ It became a different part of Sam’s repertoire. It didn’t really work for Montevallo, and what’s funny about that song is that in this conversation of pop vs. country, everyone sees Sam as far left, so it’s funny that William Michael Morgan, who is the extreme opposite of that, would be the one to have a hit on it. It just tells you that the soul of all these songs is the story. The production is different, but the songs are the same. ‘I Met A Girl,’ with the right production, would have fit on Montevallo, too.”