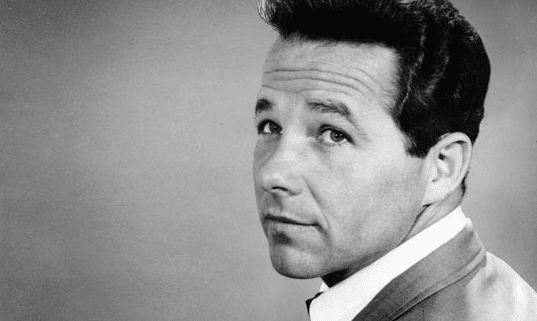 Mize made his mark as a television personality, a steel guitarist, a songwriter, a radio broadcaster and a vocalist. His best-known song is the honky-tonk classic “Who Will Buy the Wine.” Billy Mize won three ACM Awards and was the subject of a documentary film. He was born William Robert Mize on April 29, 1929 in Kansas City, but he was raised in California’s San Joaquin Valley. Inspired by Bob Wills & The Texas Playboys, the young guitarist switched to steel guitar when he was 18.

Mize moved to Bakersfield, formed his own band and worked as a DJ on KPMC radio. He began his television career in 1953 on Cousin Herb Henson’s Trading Post show on KERO-TV. He remained with that program for 13 years. Mize is considered to be one of the pioneers of the Bakersfield music scene.

Meanwhile, he also began appearing on The Hank Penny Show on Los Angeles television in 1955. The handsome, dapper entertainer graduated from there to the famed Town Hall Party program. By the late 1950s, he was appearing on seven weekly L.A. country TV shows, while still commuting to his Bakersfield commitments.

In 1966, he became the host of Gene Autry’s Melody Ranch series on KTLA-TV. He also began filming his own syndicated TV show in Bakersfield. The Academy of Country Music named him its television Personality of the Year in 1965, 1966 and 1967.

His younger brother Buddy Mize is also a songwriter, noted for the 1966 Marty Robbins hit “The Shoe Goes on the Other Foot Tonight,” Bonnie Guitar’s 1966 hit “Get Your Lie the Way You Want It” and other tunes. His “Hangin’ On” was a Gosdin Brothers country hit in 1967, a Joe Simon R&B hit in 1968 and a Vern Gosdin/Emmylou Harris collaboration in 1976. Buddy was also a radio personality and record producer.

As a recording artist, big brother Billy Mize first made the country charts with his self-penned “You Can’t Stop Me” in 1966. Recording for Columbia, United Artists, Challenge, Decca, Liberty, Imperial and Zodiac, he made the charts 11 times between then and 1977. He wrote his 1969 top-40 hit “Make It Rain.”

As a steel guitarist, Billy Mize worked on recording sessions for Merle Haggard, Buck Owens, Johnny Bond, Merle Travis, Tommy Duncan and others. He also performed as a member of Haggard’s band The Strangers.

He continued his TV work on the series RFD Hollywood. He eventually formed his own television production company and created TV specials starring Haggard. He and his brother Buddy worked on several TV projects together in the 1980s.

Billy Mize suffered a stroke in 1988 at age 59 and was unable to speak clearly for many years. In 2001, he was honored by the Pioneers of Western Swing organization. He regained his ability to sing and performed at his 80th birthday party in 2009. He was the subject of the critically praised 2014 documentary film Billy Mize and the Bakersfield Sound.