For powerhouse vocalist and songwriter Ashley McBryde, the journey from playing houseparties in her hometown of Mammoth Spring, Arkansas (population: less than 1,000) to sharing stages with Eric Church and Chris Stapleton—and most recently, signing with major country label Warner Music Nashville/WAR—has been filled with heart and hustle.

McBryde made her Grand Ole Opry debut in June, where she performed the confident, defiant “Girl Goin’ Nowhere” (co-written with Jeremy Bussey), an anthem for ambitious dreamers everywhere. In the song, she dedicates a few lines to All those folks who swore I’d never be anything/ It took a whole lot of yes I wills and I don’t care.

“I had a teacher in high school who went around the room, asking students what they wanted to do with their lives,” McBryde recalls. “I said, ‘I’m going to make songs up in Nashville,’ and she was like, ‘No, that’s not what’s going to happen. You are from Arkansas.’ Well, nothing lights a fire under an a** like someone telling you that you can’t or shouldn’t do something.”

Though small, McBryde’s hometown had one thing that would set the singer-songwriter on a course to Music City: a radio station.

“We had no internet, no cable, so I lovingly refer to where I grew up as ‘radioland,’ because there was nothing but radio, which was my entire world. It was my Hollywood, my Mt. Rushmore,” she said during a visit to the MusicRow offices, as she introduced the new track, “Radioland.”

McBryde’s musical talents were apparent by the age of three, when she began playing mandolin. “I wanted to play guitar, but I was too small, and we already had a mando, so we couldn’t afford another guitar,” says McBryde.

By nine, she had progressed to guitar, and was sitting in with local bluegrass musicians. “They would show me chords,” she recalls. “I taught myself, but most of it was from those guys.” 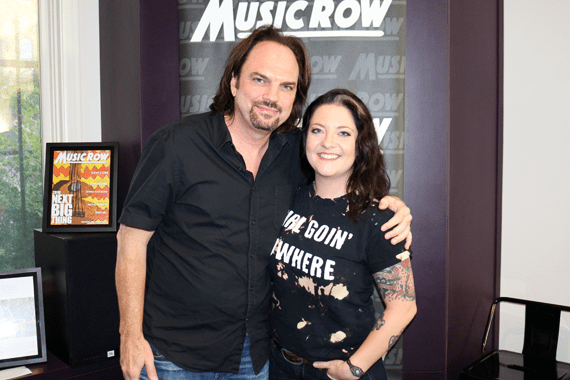 Her affinity for harmonies came by way of bluegrass music from Doyle Lawson and Quicksilver, Jim & Jesse, and Shawn Camp. Later she discovered vocalists and writers such as Carly Simon and Janis Joplin, and the guitar stylings of Jimi Hendrix. All of those influences would find common ground in McBryde’s voice, which sounds like a more earthy version of Wynonna or Joplin, with the keen songwriter’s eye for detail of writers like Dolly Parton, Miranda Lambert or Brandy Clark.

“I’m left-handed, so when I saw a VHS tape of Jimi Hendrix playing for the first time, I was like, ‘Are you kidding me? I could have just played it that way? No one told me.’ Same with vocals. I discovered there are other tools in your voice you can employ at any time.”

McBryde studied music (specifically french horn) and conducted the pep band while attending Arkansas State in Jonesboro. Though by that time she had built a solid catalog of her own material, she was too shy to perform her own music.

That changed after a national anthem singer failed to show up before a game; McBryde stepped in to sing. When fellow students discovered McBryde’s musical talents, she began playing house parties and coffeehouses in town, offering a mix of “Nickel Creek covers and stuff I made up,” says McBryde.

Eventually, McBryde made her way to Memphis, where she ran a Guitar Center store, while building her catalog, and experimenting with new sounds in clubs from Lexington to Tulsa. She moved to Nashville 11 years ago, where she began writing songs at Jennifer Johnson’s Song Factory, and collaborated with Bart Butler on her 2016 EP, Jalopies and Expensive Guitars. After a series of showcases, the vivid imagery in her songs and her soulful, resonant voice caught the ear of music manager John Peets.

“John just walked up to me and said, ‘I love what you do and I know what to do with it. Look forward to talking to you.’ And he just left. I took some meetings with him, and I knew that’s where I was supposed to be. I felt the same way when meeting people at Warner [Music Nashville]. I was like, ‘I know that’s it.’”

“We all had especially crappy days leading up to the day we were supposed to write. So crappy that I thought we shouldn’t write that day,” McBryde says. “I had broken my windshield, forgot my guitar. Nicolette had just gotten dumped in a Home Depot parking lot; they went from being together for three years and picking out wood flooring, to being single in the parking lot.” Rice was also late to the meeting, and McBryde recalls, “When he showed up, he was just a wreck. The strap on his gig bag was broken, and he was like, ‘Guys, I dropped my phone in the toilet last night at Tin Roof, and I just was not going after it.’ I don’t blame him, I wouldn’t have, either.”

The trio went to a nearby bar to discuss their misfortunes, where Rice recounted a previous day, when his car broke down, forcing him to make a spontaneous detour to Dahlonega, Georgia. Rice wound up visiting a café called The Crimson Moon, listening happening upon Shawn Mullins performing his 1998 hit song “Lullaby,” and meeting a girl.

“She raised her glass to him as they were sitting in that bar, he raised his glass back, and they’ve been together ever since,” says McBryde. “They got married last May. He said, ‘That’s the worst day of my life and it turned into the best day of my life.’”

Not to mention the inspiration for McBryde’s first single, which the trio would write that day.

“It’s a lot cooler to sing it when it’s just truth and you don’t have to bullsh*t any of it,” McBryde says.