The founder of the Johnny Cash Museum has opened his second venture in downtown Nashville.

On Wednesday, entrepreneur Bill Miller staged a press party to showcase his new Nudie’s Honky Tonk. Despite its name, this venue is far more than another Lower Broadway honky-tonk. It is a history lesson in country-music culture.

Nudie Cohn, the site’s namesake, was the creator of the spangled fashions worn by classic country stars. His rhinestone-encrusted, appliquéd, fringed and sequined designs exemplified the “look” of country music for decades. Many of these suits and jackets are in glass cases that line the walls of the venue. Outfits designed for Hank Williams, Merle Travis, Bill Anderson, Tex Williams, Hank Snow, Jody Miller, Johnny Cash and others are on display. So is the iconic, $10,000 gold lame suit that Nudie designed for Elvis Presley. Many of the most elaborate ensembles are the ones that Nudie designed for himself.
Nudie’s flamboyantly customized El Dorado Cadillac is suspended on one wall. It features pistol door handles, embedded silver dollars and longhorn steer antlers. This is one of only nine surviving “Nudie Mobiles.”

The “silver” theme is carried further atop the downstairs bar, said to be the longest bar in Nashville. The entire length of this 100-foot-long serving station is covered in antique silver dollars. Above the two-story entryway are two life-sized bucking bronco statues, with riders. There are three performance stages.

Entertaining the attendees with hardcore country tunes on the main floor’s stage was baritone Nick Cross, accompanied by Brad Mitchell on second guitar and harmony vocals.

A merchandise space in back is lit with the famed Nudie logo’s cowgirl, her lariat made of red neon. Miller pointed out that she was originally nude, and can be seen as such on the labels of some of the earliest jackets, such as the one that belonged to Hank Williams.

“The rhinestone cowboy couture was founded in the hands of Nudie Cohn,” he said. “This attraction serves not only as a historical record of the epicenter where fashion perfectly fused country and Hollywood coutures, but also provides a museum-like environment for patrons to enjoy great food, drinks and music.” Bill Miller opened the acclaimed Johnny Cash Museum in Nashville in 2013. His next venture in Music City will be a Patsy Cline Museum. Nudie’s Honky Tonk is located at 409 Broadway, in the location formerly occupied by Lawrence Brothers Records.

“It’s all about country music,” said Bill Miller. “It has to be.” 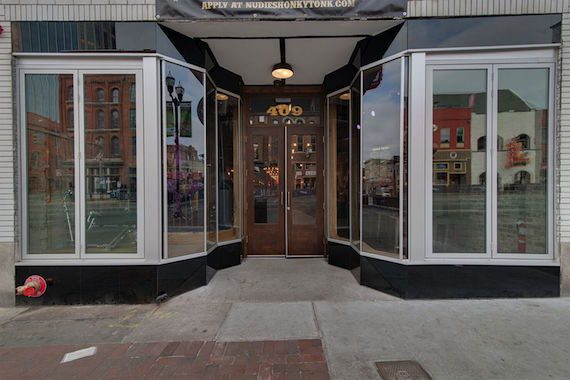