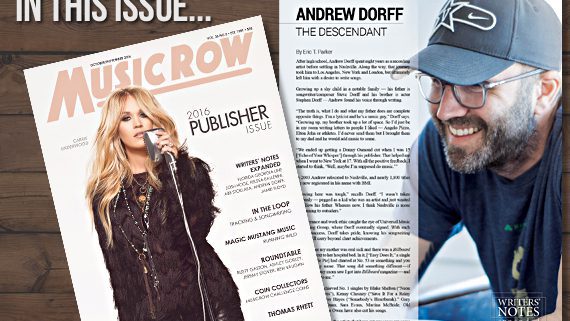 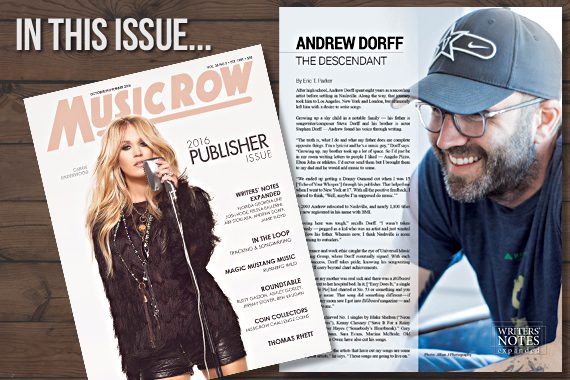 Andrew Dorff is one of five songwriters profiled in the 2016 MusicRow Publisher Issue. Dorff has penned five BMI Award-winning songs and four No. 1 hits including Blake Shelton’s “My Eyes” and “Neon Light,” in addition to Kenny Chesney’s “Save It For a Rainy Day,” and Hunter Hayes’ “Somebody’s Heartbreak.”

A bonus Q&A from Dorff’s interview with MusicRow is below. To learn more about his first cut at age 15 and how he made his way to Nashville in 2003, pick up a copy of MusicRow’s 2016 Publisher Issue.

MusicRow: Who are your musical heroes?

Andrew Dorff: I’ve always just loved songs. I didn’t have every Beatles record, I would just love a song from a random [album]. Elton John and Bernie Taupin are influences. I read a lot. I love books with just lyrics. The Beat Poets were a big inspiration to me, like Gregory Corso. I read a lot of his work. I actually got to meet him before he passed away.

What inspires you as a songwriter?

It sounds cheesy, but just living life in general. I’m inspired by a lot—the ebb and flow of life. I still live with my two dogs and do a lot by myself. I love it. I observe. I’ll sometimes just watch at a restaurant or bar. I see language as an instrument. Where some people may go home and practice their guitar, I like to read. I like words—to mess with them and play with them, I exercise it a lot.

Also, the competitiveness of sports—baseball, basketball, football—with highs and lows has always been an inspiration for me. Sports is a great metaphor for most things. I find myself referencing sports all the time. Now I’m a big hockey fan. I go to all the Predator games.

Who is in your writing circle in Nashville?

I like to see people coming up in group, like if they graduate from Belmont and start making their way. Coming to Nashville was kind of like grade school for me. I had a lot of friends—I may have lunch with the pretty girls one day, the football team, the science club, the math nerds. I could chameleon myself. Being here, there has been a lot of navigating these groups who come up together. I feel welcome in most of them. Being a lyricist helps too.

How has your publisher (UMPG) and performance rights organization (BMI) impacted your career?

We had a dinner celebrating “Save It For a Rainy Day” recently and BMI surprised me with four Million-Air Awards. BMI has been great. I remember the first time I opened a company with them when I was 12 years old.

[UMPG] sees that I’m a hard worker and team player. I’ve had a few different point-people on the creative staff, but they’ve done a good job at branding me as a lyric dude. They’ve done good PR and championing—getting me in really good rooms I couldn’t get into before. When you’re with a bigger company, they’ll sign artists like Hunter Hayes. He was my first No. 1 (“Somebody’s Heartbreak”).

Once I got that No. 1, I started getting a lot of, “Hey we should get together again.” At the BMI Awards, you’re looked at different if you’re wearing a medal around your neck. They’re fun to be at, but when you have a medallion around your neck, it feels a whole lot better.

Did you ever feel pressured towards success, with your brother being actor and your father as a songwriter?

I was very supported by my family, still am. I’ve never felt pressure. I joke with my father now. We were at some No. 1 thing for me, and he said, ‘You only have so many more to go to catch me.’ There’s definitely a healthy competition. It doesn’t feel like I have to live up to him at all. Probably because of my niche with lyrics, which has opened doors for me.

What other moments have stood out thus far?

Doing what we do to make a living makes me proud. Or being accepted makes me proud. One of my favorite awards I’ve won was last year at the NSAI Awards, in the 10 Songs I Wish I’d Written. That was from my peers. I love that. When my peers in this town love a song, that’s really special.

I want to keep writing songs that matter. There’s not quite a greater feeling than having a song of yours come on the radio. You can’t help it, you just turn it up a little louder. Having people tell you they heard your song on the radio and it affected them in some way, whether it’s laughing, crying, dancing—that’s why I do what I do.

Pick up a copy of the MusicRow Publisher Issue to read the full feature on Andrew Dorff.