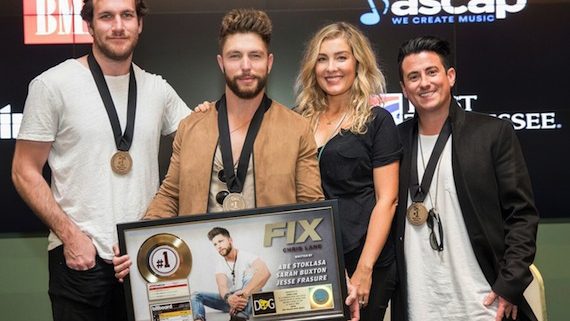 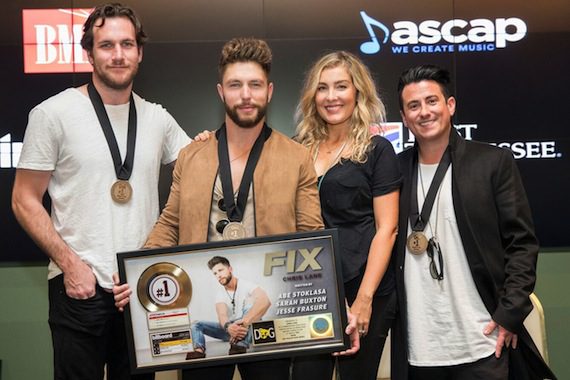 Chris Lane carried “Fix” to No. 1 with a whole lot of songwriters, publishers and radio support riding shotgun. At a No. 1 party at BMI on Monday (Oct. 10), it was noted that “Fix” is the first time in 30 years of modern chart reporting that a new label’s first single has topped the chart. The single reached No. 1 in August after a 35-week climb. 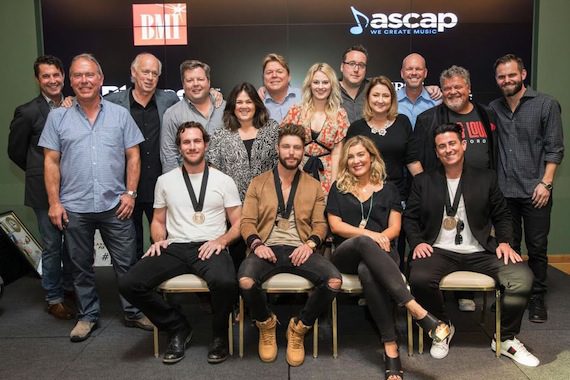 Big Loud Records President Clay Hunnicutt took a minute to thank Lane and the songwriters, saying, “We know songs are sacred. You believe it them. You gave us this one—a first single, a first artist. I know that doesn’t come easy. I couldn’t thank you all more. Chris, thanks for working as hard as we do. That’s all we ever ask.”

Sarah Buxton ran through her list of thank-yous, lavishing praise on her collaborators and pointing out her family in the crowd. “I’ve obviously chosen really wisely in life to be able to be associated with all of you guys. I see some of my favorite co-writers in the room, and the thing that I’m most proud of in my life is the friendships and the co-workers that I’ve accumulated over the years. You all mean so much to me. Thank you for being here to celebrate this. I’m so grateful.”

Stoklasa spoke highly of everyone on stage and particularly thanked Lane by saying, “You made it your own. You took the cuss words out so we could make some money.” Later he commented that when he was broke, he’d steal toilet paper from Big Yellow Dog offices. He brought Wallace and Big Yellow Dog co-owner Kerry O’Neill to the stage for a presentation – of jumbo packs of Cottonelle.

He concluded his time at the podium giving emotional speeches about his girlfriend and his mother, who were both in attendance. 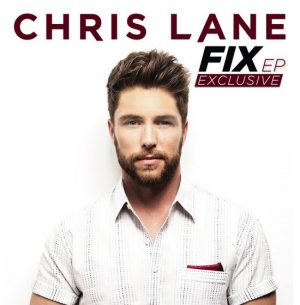 Wrapping things up, Lane glanced at notes from his phone as he spoke to the crowd. He apologized for not being very good at public speaking yet his speech was endearing and sincere.

“What a special day it is. I cannot believe I am standing here celebrating my first No. 1,” he said. “I’ve been able to see several of my artist friends pick up their No. 1s and be able to celebrate that. I never thought during that day I’d have the opportunity to be here today. It was not that long ago that I was mowing lawns every day of my life. I’d ride around on the mower and play music at night, and I guess in those moments, I never thought, ‘Wow, I’m gonna have a No. 1 one day.”

Lane recounted how he came into “Fix.” When producer Joey Moi was working on some vocals that Lane had recorded, Lane had an Usher song in his head and started doing some falsetto runs out loud. Lane said Moi turned around and asked, “What was that? That’s what we need to be doing!”

A week later, Lane’s manager Seth England sent “Fix” for the young artist’s consideration, referring to it as “the missing piece of the puzzle.”

Lane said, “As soon as I heard this song, from the production that Jesse put on this thing, to Sarah’s background vocals, and Abe – who absolutely slayed vocally on this song – I loved it. Everything about it. Lyrically it fit my style and everything I was looking for.”

He continued, “I’m very thankful that these songwriters took a chance on an artist that didn’t really have a lot going on. I can’t believe this is my first No. 1, so thank you all, seriously, for believing in me and letting me have this one.”