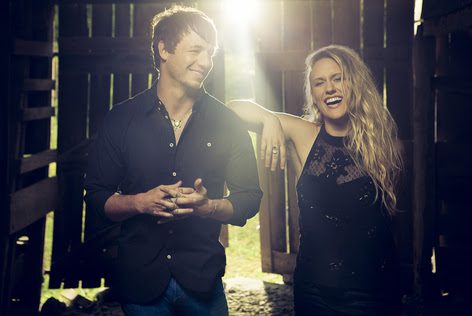 The duo is composed of songwriters Kristy Osmunson and Jon Stone. The project was co-produced by Stone and Curb artist Lee Brice (who appears on the track, “Eighteen.”) In addition, Osmunson formerly recorded as part of Bomshel, a duo that was signed to Curb.

American Young’s singles have included “Love Is War” and “Wasn’t Gonna Drink Tonight.” They released an EP on Curb in 2014.

“Jon’s a perfectionist and a finisher,” says Osmunson, a classically-trained violinist who met her future bandmate at a Lee Brice performance in Nashville. “He works harder than anybody I know. I’m all about the vibe and the feel of the moment.”

“The thing that’s so inspiring for us both is that we’re so different,” Stone said. “Everything that drives me crazy about her makes her a star. She’s everything I wish I could be, but once we’re together we’re like Voltron. It becomes selfless; all our needs become secondary to American Young.”

Stone’s songwriting credits include Brice’s “A Woman Like You,” Jerrod Niemann’s “Only God Could Love You More,” and Rascal Flatts’ “Me and My Gang.” Osmunson’s catalog includes Joey + Rory’s “Cheater, Cheater.”