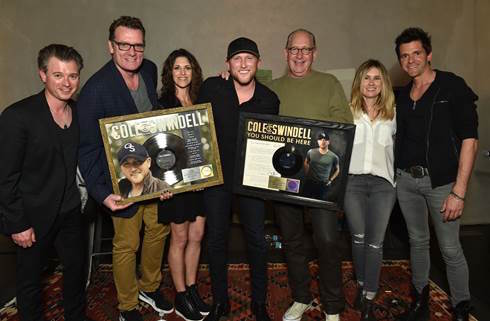 Cole Swindell celebrated the launch of a new album on Thursday night (May 5) at the Nashville venue Ruby, surrounded by members of his label, publishing company, management team and songwriters who contributed to the project. The event could be heard on SiriusXM/The Highway.

The singer-songwriter’s sophomore project, You Should Be Here, was released by Warner Bros./Warner Music Nashville on Friday.

Swindell got a few extra reasons to celebrate during the evening, courtesy of Warner Music Nashville President/CEO John Esposito, who presented Swindell with plaques commemorating the platinum status of his self-titled debut album, as well as gold certification for his fifth consecutive No. 1 hit, “You Should Be Here.”

“We knew we had a depth of songwriting that was profound,” Esposito said of Swindell’s debut project. “This takes it to a whole new level.”

Several writers who contributed to the album were on hand to assist Swindell in performing six songs from the project. Swindell co-wrote seven of the 12 tracks on the album, and thanked the writers who contributed, especially on the songs he didn’t have a hand in. “I don’t ever want to be stupid enough to miss a great song because I didn’t write it,” he said.

He brought up his producer and fellow songwriter Michael Carter, as well as Gorley, for a rendition of “Broke Down.”

“Making My Way To You” featured assists from Carter, Matt Dragstrem and Cole Taylor, while “No Can Left Behind” included Brandon Kinney and Carter.

Swindell called “Stay Downtown” a follow-up of sort to his single “Hope You Get Lonely Tonight,” as the new song touches on the struggle to finally let go of a failing relationship. According to Cole Taylor, Swindell was the very first to hear “Stay Downtown,” which he penned with Dragstrem. “I didn’t turn it into my publisher or anything,” Taylor said with a sheepish grin. “I sent it straight to Cole.”

His latest single, “Middle of A Memory,” is one of the older songs on the project. It was inspired during the writing session for “Kiss,” a song that appeared on Swindell’s 2014 project Down Home Sessions. Swindell says co-writer Gorley encouraged him to make the lyric into a song of its own.

Swindell is keeping the celebration going with a special pop-up performance on Friday night (May 6) at The Stage on Lower Broadway in Nashville.

For more Swindell’s upcoming album and the success of “You Should Be Here,” read MusicRow’s interview with Swindell.