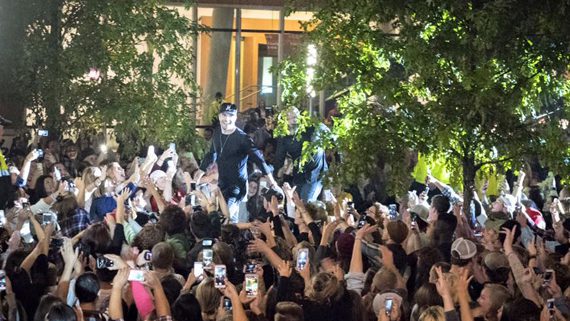 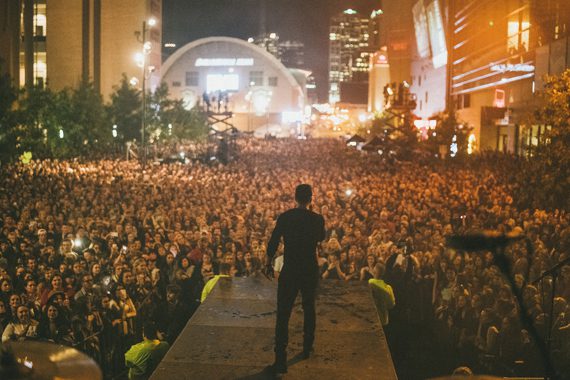 A well-groomed Sam Hunt threw a free, 85-minute street party in downtown Nashville yesterday (October 28) in the alcohol-approved corridor between the Omni Hotel and the Music City Center.

Over 10,000 fans held up cell phones and selfie sticks, even sitting on each other’s shoulders to remember the event. Hunt even attracted attention from the convention and pool levels of the Omni who peered down at the free extravaganza. Prime views from the patios of Bajo Sexto and Barlines were not as full as expected, as the streets bled over with onlookers during the show.

“This party is to celebrate our first record put out a year ago, yesterday,” said Hunt. “It is also a homecoming. I haven’t been home and it feels good to be back.”

That first album, Montevallo, has sold over 800,000 copies in a year’s time and was celebrated this week with the reissue of Hunt’s independent mix-tape, Between The Pines. Hunt brought supporter and blogger Katelyn Carter to the stage to thank her for helping get the word out early on.

“We put out Between The Pines for free online and Katelyn mailed out copies from her own pocket,” said Hunt, who gave her white roses on stage. “You are the reason we were able to get on the radar of labels.” 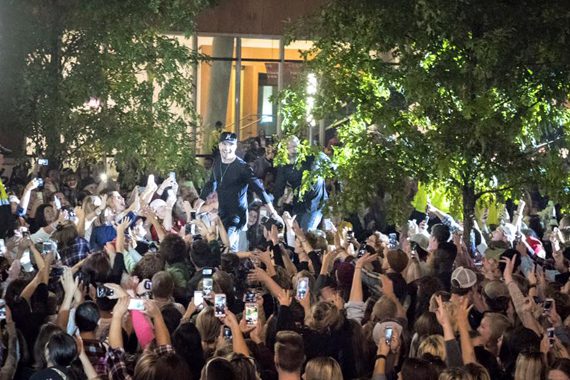 Music continued with the Hunt-written songs of Keith Urban (“Cop Car”), Kenny Chesney (“Come Over”), and Billy Currington (“We Are Tonight”).

Surprise guest Cam was invited to the stage to sing her impeccable song “Burning House” as the audience sang in unison.

Fans found a view as music continued with Hunt’s original “Speakers,” “Take Your Time,” “House Party,” “I Met A Girl,” “Make You Miss Me,” “Saturday Night,” and “Break Up In A Small Town.”

Sponsored by Bose, there was said to be free beer from additional event sponsor Anheuser-Busch.