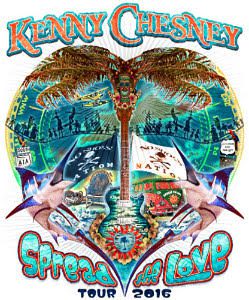 Kenny Chesney has announced stadium dates for his 2016 Spread The Love tour. Coming off a record-breaking 2015 with The Big Revival Tour, Chesney will add tourmates Miranda Lambert, Sam Hunt, and Old Dominion to next year’s shows.

The first will be held at Auburn University’s Jordan Hare Stadium on April 23. Tickets for that show are already on sale.

“People always want to know about the stadiums,” says Chesney, “because it’s a big show… a lot of music… and the kind of day people come together and celebrate friendship. We know a lot of people travel to these dates from all over, so to give them as much time as possible to get ready, I figured it’d be nice to get these out in front of our other shows! There could be a stadium date or two added, but for everyone who’s asking, let’s get next year started, right now.”

*Dates will feature a surprise guest in Sam Hunt’s slot.

& MORE TO BE ANNOUNCED…