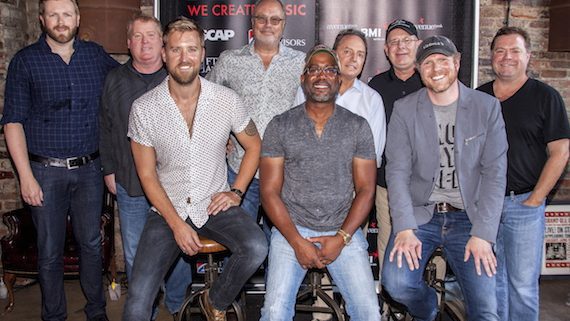 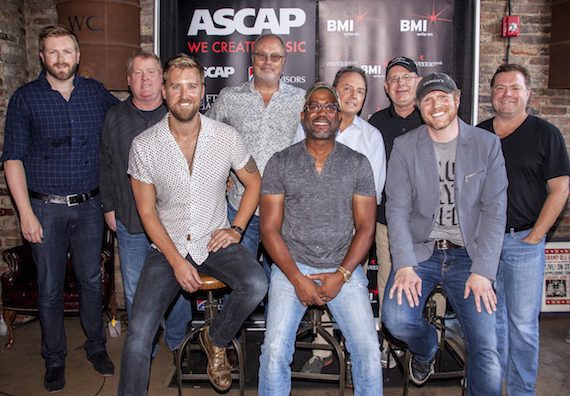 The William Collier’s Room at Marathon Music Works in Nashville served as the location to celebrate the recent No. 1 song “Homegrown Honey” by Darius Rucker. Co-hosted by ASCAP and BMI, the event recognized Rucker as an artist and co-writer on the song along with Charles Kelley and Nathan Chapman. The song was Rucker’s seventh No. 1, Kelley’s 11th No. 1 and Chapman’s first No. 1 tune as a songwriter.

Mike Sistad of ASCAP praised Rucker and thanked him for being an ASCAP member for 21 years. Producer Frank Rogers was also credited for adding to his throng of hit productions.

Jody Williams of BMI spoke about Chapman as a distinguished and accomplished record producer, artist and now, a chart-topping songwriter.

Universal Music Group Chairman/CEO Mike Dungan made sure the Universal Team was recognized, including the product management, A&R, and promo teams. Also on hand to commemorate the chart-topper were Warner/Chappell Music’s BJ Hill, and UMPG’s Ron Stuve, and CRB’s Bill Mayne.

Ron Cox of Avenue Bank announced a contribution in the name of the songwriters to St Jude Children’s Research Hospital. 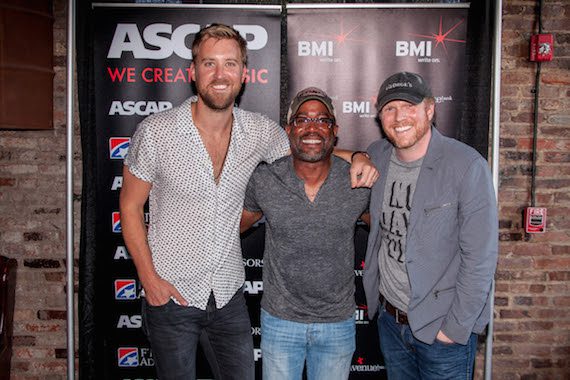 Rogers amused Chapman and the crowd by boasting that he produced a No. 1 song for Taylor Swift’s producer. Chapman has had a hand in producing all five of Swift’s records. Rucker and Kelley were both humbled by the celebration, but were more excited that “Homegrown Honey” is Chapman’s first No. 1 as a songwriter.

Kelley was sure to mention that he grew up a fan of Hootie & The Blowfish. “If you would have told me when I was 15 that I would be sharing the stage with Darius, celebrating a No. 1 song we wrote together, I would’ve said you were crazy.”

South Carolina resident Rucker was quick to thank all of the Capitol Records promo staff along with UMG’s Cindy Mabe and Mike Dungan. “They championed me and believed in me…Dungan gave me a record deal. I wouldn’t have given me a deal even if I was my own cousin,” Rucker joked. “But I am thankful to them and anyone that has ever believed in me, or even written something nice about me.”

Chapman took his time on the mic to thank mostly his family. “When I saw the song in the top 5, I was hoping it would hit No. 1. Not to celebrate me, but to give me the chance to stand up here and thank them. It’s a big moment, and I’m thankful.”