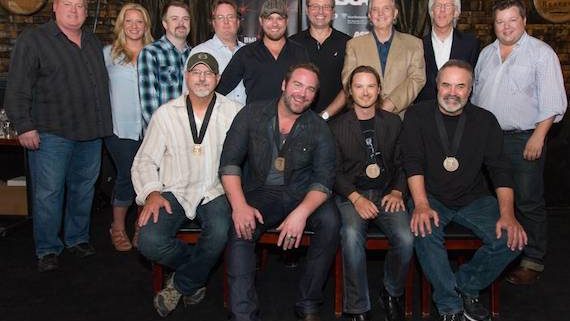 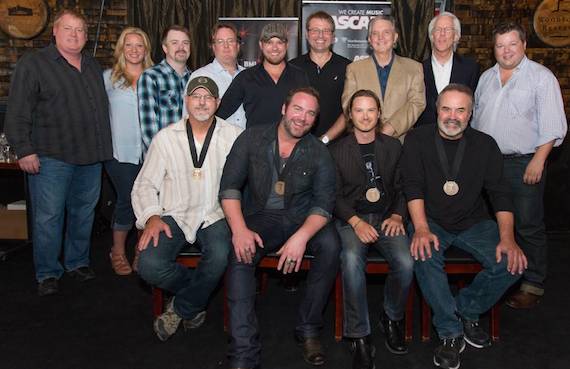 Nashville’s The Pour House was a packed house yesterday (June 3), as BMI and ASCAP co-hosted a No. 1 celebration for the song “Drinking Class,” performed by Lee Brice.

The song was penned by BMI songwriters David Frazier and Ed Hill, and ASCAP songwriter Josh Kear. After writing together for 15 years, it is their first shared No. 1. It was noted that this is Frazier’s first overall No. 1, so BMI’s Bradley Collins presented him with a BMI guitar to commemorate the milestone.

“Drinking Class” marks Brice’s fifth No. 1 as an artist. He also produced the song along with Kyle Jacobs and Matt McClure.

During the celebration, Big Yellow Dog’s Danni O’Neill and Amylase’s Whit Jeffords offered their congratulations, as did representatives from the CMA and CRB.

Curb Records founder Mike Curb spoke on behalf of his label. “In all my years in this business, I’ve never met someone that is the real deal more than Lee Brice,” said Curb.

Ron Cox of Avenue Bank announced a donation on behalf of the songwriters to The Nashville Rescue Mission.

Ed Hill has been in the music scene since the 1970s and was the 2006 BMI Songwriter of the Year. “I don’t take one second for granted,” said Hill. “I’m very proud to be a part of this record.”

David Frazier made sure he thanked everyone that supported him throughout his career. “I’m a late bloomer, but I’m thankful to be celebrating my first No. 1.”

ASCAP’s Mike Sistad took to the stage to salute Josh Kear. Sistad said that “Drinking Class” marks the eleventh No. 1 song for Kear, who was the 2013 ASCAP Songwriter of the Year and is a 4-time Grammy winner. As Kear spoke, he made a point to thank the record label. “To the Curb promotion staff. Thank you, thank you, thank you.”

Lee Brice takes pride in being a songwriter, but also gave credit to the songwriting community for their efforts. “It all starts with a song. And as a songwriter, I know what it takes to get up every day and go to work. To the writers of this song, thank you.” Lee continued, “To the producers, thank you for all the time you put it into this project.”