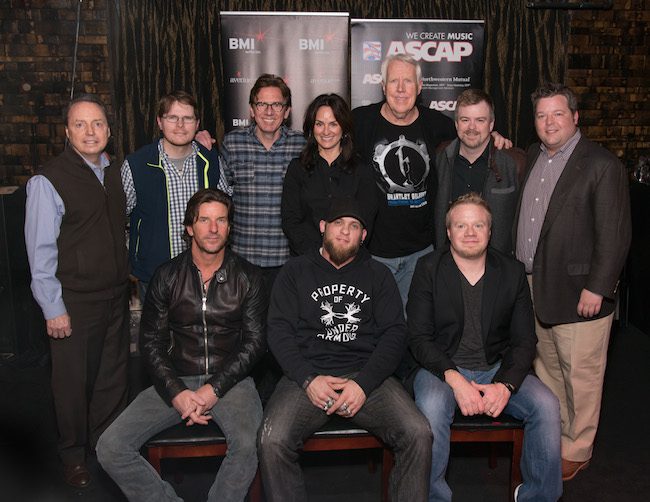 The Pour House in Nashville was an industry hotspot yesterday, as BMI and ASCAP co-hosted a celebration of the No. 1 song “Bottoms Up” by Brantley Gilbert. The song was written by BMI songwriter Gilbert, ASCAP songwriter Brett James and ASCAP songwriter Justin Weaver.

The song reached the top of the charts 11 months ago, but it was a challenge to arrange a time that worked for all parties involved. Gilbert does not live in Nashville and has been busy touring. But James was determined to have the success of this song celebrated. “This is Justin’s (Weaver) first No. 1 song, there was no way were weren’t going to have a party for him,” said James.

Weaver has been a songwriter for almost 13 years and took his time to thank everyone that supported him during the journey to his first chart topper. “It’s been a long road,” said Weaver. “But it’s always been about taking baby steps, pushing forward and always doing the right thing and I think we did.”

“When I was first starting out, I was anti-Nashville,” says Gilbert. “I didn’t want a booking agent, management or any of that. I just didn’t trust anyone. But I see now that this town is all about family and I thank you for allowing me to be a part of yours.”

Ron Cox of Avenue Bank was present to make a donation on behalf of the songwriters to the Kory Potts Scholarship Foundation, in memorandum of Brantley’s close friend who lost his battle with Leukemia and became the inspiration behind his current single, “One Hell of an Amen.”

Also recognized was producer Dann Huff who has now produced 41 No. 1 records.

Valory Music Group’s George Briner awarded Gilbert a plaque commemorating 1 million sales of the single, but explained that the plaque was made last year, and as of that night the sales have reached 2 million.