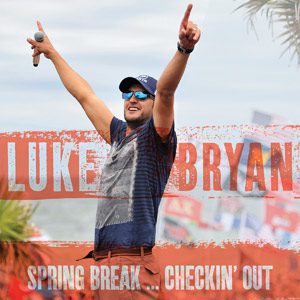 Luke Bryan will release his final Spring Break album, Spring Break…Checkin’ Out on March 10. Over the past seven years, the superstar has released five EPs which culminated into last year’s 14-song project. Total sales of the enterprise have reached over 1.1 million.

Spring Break…Checkin’ Out includes 11 tracks (six from last year’s release) and five new, original songs all co-written by the UMG Nashville artist. Walmart will carry an exclusive deluxe package, Luke Bryan Spring Break…The Set List: THE COMPLETE SPRING BREAK COLLECTION ZinePak, which will include a two-disk set with all 25 songs plus a 48-page magazine with exclusive interviews and photos from each of the previous spring break releases.

“My fans have been so wonderful to embrace these special spring break albums over the last seven years,” shared Bryan. “We’ve created a lot of amazing memories writing these songs and performing them at the beach shows in Florida. Those concerts are among the most enjoyable of my career!”’

In promotion of the party album, Bryan will play two free concerts at Spinnaker Beach Club in Panama City, Fla., on March 11 and 12. Over 230,000 fans came out for last year’s shows. In addition to receiving four nominations for April’s 50th Annual ACM Awards and a commitment to co-hosting the Texas gig for CBS, Bryan will be honored with a summer exhibit at the Country Music Hall of Fame and Museum and will embark on a new tour in May, Kick The Dust Up Tour.

Pre-orders for the regular album are available now. The Walmart exclusive is expected to be in stores and at Walmart.com while supplies last.