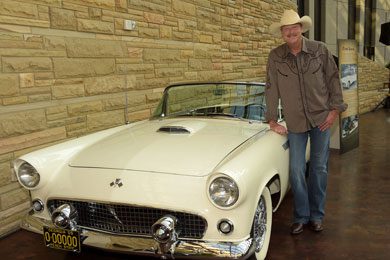 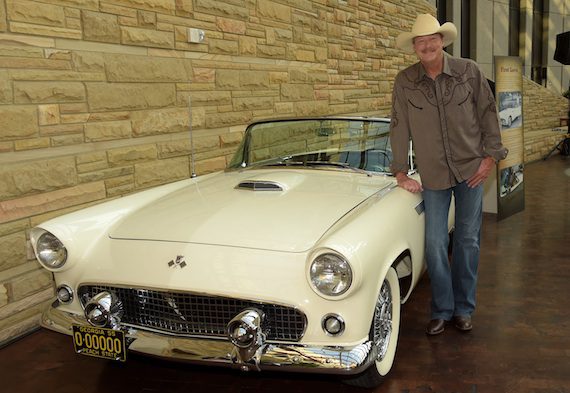 I love Alan Jackson.
If I were king, this man would already be in the Country Music Hall of Fame. In the meantime, we have “Alan Jackson: 25 Years of Keepin’ It Country,” a new exhibit at the Country Music Hall of Fame & Museum. The preview party for it was held on Wednesday evening (Aug. 27), and its artifacts are dandy.
Alan’s daughters Mattie, Ali (Alexandra) and Dani Jackson gazed in fascination at his career memorabilia, costumes and souvenirs. “This stuff has been in our house for years, but it looks much better here,” Alan explained.
“I love it that the title of this exhibit is ‘Keepin’ It Country,’” said author and wife Denise Jackson, “because in every correspondence from George Jones, he’d sign it, ‘Keep It Country.’”
“It was good to get a lot of that stuff out of the house,” Alan remarked dryly. “The whole house – it was gettin’ to be embarrassin’ — I hope the fans enjoy it.”
He was droll and endearing throughout the little ceremony opening the display. CMHoF CEO Kyle Young started to praise him, but Alan interrupted with humor to encourage people to draw closer: “Come around here if you can’t see,” he suggested to the crowd from the small riser with the microphones. “It ain’t no big deal: It’s casual.”
“Twenty-five years, that’s how long Alan Jackson has been making authentically country music,” Kyle began. “With his songs…he has conquered Nashville.
“For the first time, Alan will be our Artist in Residence [at the same time his exhibit is open],” Kyle added. Watch for a series of intimate shows to take place in October in the new CMA Theater.
In a nice bit of convergence, Alan’s exhibit replaces the one devoted to Glen Campbell. Alan’s Nashville career began when Denise, then a flight attendant, approached Glen on an airliner. That led to a songwriting deal with Glen’s publishing company on Music Row, to the couple moving to Nashville, to Alan working in the TNN mailroom and to his recording contract with Arista Records.
“I moved to Nashville 30 years ago – 1985,” Alan recalled. “We came over Monteagle mountain, pulling a trailer and [carrying] a sack full of songs. It’s hard to believe I’m in this great building with so many American music legends.”
He added that, outside of his new exhibit, he already has an artifact in the museum. That would be his daddy’s old radio, which is cited in the lyrics of “Chasin’ That Neon Rainbow.” 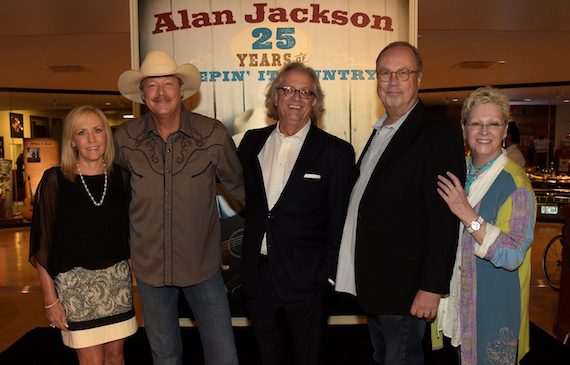 His co-writer on that 1990 hit is Jim McBride, who was at the party. So were longtime producer Keith Stegall, former manager Barry Coburn and exec Tim DuBois, who first signed him as a recording artist.
“I see a lot of familiar faces out there,” Alan commented. “There has been a lot of people over the years who have helped me get to where I’m at. It’s not all me.”
Alan amiably mingled with everyone, posing for pictures and chatting. The informal, intimate and convivial gathering included Mike Dungan, Gary Overton, Royce Risser, John Huie, Leslie Fram, Dixie Owen, Jerry & Ernie Williams, Alan’s band The Strayhorns, Jessie Schmidt, Andrew Kintz, Cindy Watts, Donna Nicely, Kelly Lynn Janson, Shelley Mays, Stephanie Langston and surviving GAC Nashville exec Suzanne Gordon, plus such Hall of Fame staffers as Carolyn Tate, Jay Orr and Kay Clary.
Sarah Trahern was celebrating her move to 37212, with its easy access to Music Row. Big baseball fan Kay West was en route to the “Last Beer at Greer” Nashville Sounds game. (We drove by there after the party, and the traffic was insane). Jenny Bohler was back from the grand opening of the Johnny Cash birthplace home in Arkansas. Donna Hughes couldn’t resist checking out the Jackson family’s reaction to the display cases. 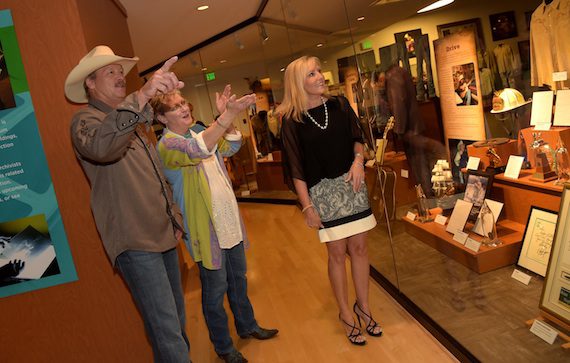 Who could blame her? The Alan Jackson museum exhibit is one of the most visually enjoyable ever mounted at the museum. It includes more model cars (especially Thunderbirds) and motorcycles than you can estimate. Miss Mary noted the rack of shirts with ripped off sleeves, as well as the assortment of slashed jeans. I loved the stills and artifacts from the star’s videos, including the “Chattahoochie” water ski.
One groovy item is the Ford truck “desk” that was used in Alan’s first Fan Fair booth. There are a number of pieces from the star’s collection of Andy Griffith Show memorabilia. If you go this opening weekend, you can see his famed, white, 1955 T-Bird convertible temporarily parked in the museum’s lobby. (If you don’t already know this artifact’s fascinating back story, be sure and read the sign nearby.)
Remember that cool Harley motorcycle that was pictured on the jacket of his A Lot About Livin’ album? It’s there. So are his childhood red tricycle and scooter. He has played the Houston Livestock & Rodeo more than 20 times, and has the belt buckles to prove it. Original songwriting manuscripts are on display, including the one for his heart-stopping “Where Were You (When the World Stopped Turning)” of 2001.
Award statuettes are, of course, abundant. The cutest one might be the mini gold boot that Alan’s sister made for his first No. 1 record. Also don’t miss the “Daddy Gene” salute. You western-wear costume devotees will be well rewarded: There are colorful shirts, jackets and boots to die for. By the way, the jeans Alan wore to the event were not torn.
“I wish I had a nickel for every time I’ve listened to ‘Wanted’ late at night,” said Kyle, who is still single. “You think he’s singing about something he knows. But he’s singing about your life, too.
“Here’s to the first 25 years,” added Kyle in his toast to Alan. “I’ve got a feeling that, if he wants to, he has 25 more.
“And, at some point in his life, Alan is going to wind up in another part of this museum [yes, the Hall of Fame rotunda].” Amen to that.