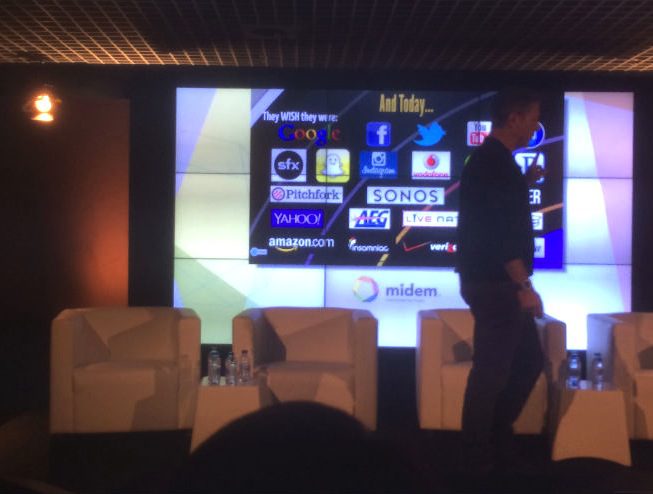 Mark Geiger discusses the future of the music business. 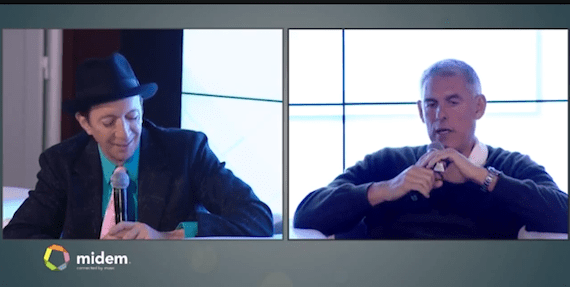 Lyor Cohen, former head of Def Jam and Warner Bros. Records, was the keynote speaker to discuss his new venture, 300. Tom Silverman, head of Tommy Boy Records, hosted the event.
Cohen worked for a bank before he discovered rap music. He became a partner in Rush Management with Russell Simmons, then in 1984 joined Def Jam. In 1985 Rick Rubin, one of the founders of Def Jam, left for CBS and Cohen eventually filled the top seat there. From CBS, Cohen went to Warner Bros., where he headed the Interscope/Def Jam label. For the last 32 years, Cohen has lived each day “hoping I’ll meet the artist who will change my life and change popular culture. I’m really interested in watching an artist grow from nothing to successful.”
Cohen’s philosophy is: “Understanding magnificent is magnificent, but good is good. Good tricks you. You think you can make good great. But magnificent doesn’t happen that often and when you screw with good you get pulled out of position, and you miss the opportunity to find magnificent. Sign stars and don’t dust bums off.”
Cohen used the opportunity to announce a new partnership between 300 and Twitter.
• • •
The panel for “Who’s Investing In Music” was hosted by Allen Bargfrede, Executive Director of Rethink Music; with panelists Benji Rogers, CEO of Pledge Music (USA); and Mike Tunnicliffe, Chief Growth Officer of GroupM/WPP, the largest marketing company in the world.
Rogers noted that fans who donate to fund music projects fall into five levels: the casual fan donates about $68 per project, the next level is $182, followed by $344, the Digital Aficionado give about $402 per project, and those who want significant involvement give about $1,004. Rogers stressed that investing in bands with crowd sourcing entails the band involving fans in the “journey,” not just asking for money.
“You must give fans who source something to do,” said Rogers, “not just ‘attend my concert and buy my stuff.’ Most artists are creative but don’t think how their music will get to an audience and the impact it will have on them.” Rogers said that for bands involved in crowd sourcing, they should ask every day, “What have I given my fans to do today?”
Rogers also warned that “a business has a thousand moving parts and having thousands of investors could cause problems.” A single large investor—or several large investors—could cause problems if the investors want to dictate what the band should record or how they present themselves.
Tunnicliffe stated that marketing companies invest in music because “it is an opportunity that can produce content and promotion for the millennial market,” who “will spend $10 trillion during their lifetime.” This involves “moving away from the traditional. We’re looking for an authentic way of reaching the market, a way to organically get engaged.” In terms of Return on Investment (ROI), “we measure that by sales, shifts in image of the brand, and how it affects the millennial audience. Brands are not in the business of becoming an artist, they’re in business to promote their brand.” In terms of a business wanting to create a label or financing the development of a band, the business does not want to be involved “because it’s not what we do.”
“The labels have traditionally dis-enfranchised themselves from fans because they ‘fear’ them,” said Rogers. “The connection to fans used to come from retailers” but, with the decline of retail outlets, “the label now has to connect with fans.”