New York-based PR and Artist Development firm, The Press House, has opened a Nashville office at 24 Music Square West. Founder and CEO, Dawn Kamerling, says, “We’ve had a presence in Nashville for a while now, and a lot of our artists are based there. It just makes sense for us to expand in this direction.”
The Press House’s Music Row office will be headed by Senior Publicist, Maria Drummond, whose career includes time at SiriusXM, AAM Management, and Jerry Duncan Promotions. “It’s an exciting time in Nashville. Everyone, everywhere is hyper-aware of how cool this city is,” says Drummond. “But being a native, none of this is new to me. The music has always been diverse, it’s always been more than just Country, and it’s always been good. I’m excited to showcase that with our roster.”
President of Artist Development, Tommy Merrill, says, “After spending so much time in Nashville over the past year and half, working with the phenomenal talent in town, and having a honest and genuine connection with those artists, we feel a greater presence in Tennessee is the perfect move to make. The goal is to bring our international and national artists to Nashville and to give our Southern artists opportunities that come from beyond their stomping grounds.”
“It’s a great time for the company,” says Kamerling from her office in lower Manhattan. “I am excited about our changes and continual growth and look forward to see what kind of opportunities 2014 will bring!”
The Press House’s current client list includes Lori McKenna, James McCartney, Blake Morgan, Ed Romanoff, and others.
Drummond can be reached at [email protected] or at 615-306-0737. 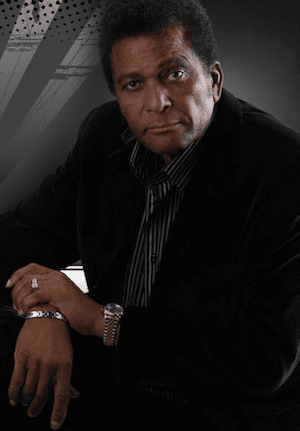 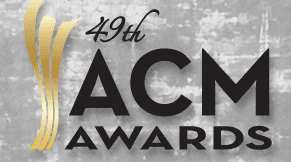 The Academy of Country Music and Great American Country are teaming for the sixth consecutive year, and the newcomer category for the 49th Annual Academy of Country Music Awards will be voted on by the fans through VoteACM.com and GACtv.com/ACM, beginning Tuesday, Jan. 21, 2014.
The Academy of Country Music once again combined all newcomer categories into a single, overall category for New Artist of the Year. The New Artist of the Year award absorbs all newcomer categories including New Male Vocalist, New Female Vocalist, and New Vocal Duo or Group categories from past years, and the winner will be revealed on the live. telecast of the 49th Annual Academy of Country Music Awards.
The top eight artists from the first round of ACM professional voting are considered semi-finalists and will compete via the Great American Country fan vote, combined with the ACM professional membership vote, to determine the final three nominees for the award. The final three nominees will compete for the trophy, with a combined fan and professional membership vote to determine the winner.
The show is produced for television by dick clark productions and will be broadcast from the MGM Grand Garden Arena in Las Vegas Sunday, April 6th, 2014 at 8:00 PM live ET/delayed PT on the CBS Television Network.
NEW ARTIST OF THE YEAR semi-finalists:
Lee Brice
Brett Eldredge
Tyler Farr
Justin Moore
Kip Moore
Kacey Musgraves
Thomas Rhett
Parmalee
First round fan voting for New Artist of the Year will begin at www.VoteACM.com and www.GACTV.com/ACM on Tuesday, Jan. 21st at Noon E.T., and will close on Tuesday, Feb. 4 at 3 p.m. ET. The final three nominees will be announced in the coming weeks and will move on to compete in the final round of voting for the New Artist category at VoteACM.com. Final round fan voting begins on Monday, March 24 and will close on April 6, with the winner being announced live during the 49th Annual Academy of Country Music Awards broadcast on CBS on Sunday, April 6 at 8 p.m. ET/PT. 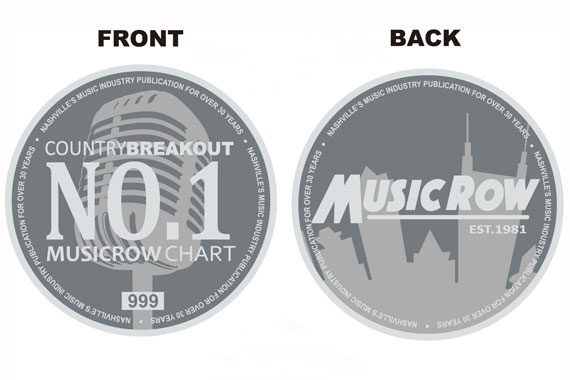 A new year calls for new traditions, and MusicRow announces its latest tradition, the No. 1 Challenge Coin. For those who are unfamiliar, challenge coins celebrate distinguished individuals, and the challenge coin tradition is believed to date back to WWI, when they were initially given to American soldiers.

Varying accounts exist, but the most common story behind the coin’s name is as follows. After receiving a challenge coin, organization members carried it with them at all times. When challenged to prove membership, they would produce it to verify their membership status. Some stories add if the member couldn’t produce the coin, they had to buy the challenger(s) a drink and visa versa.
Although challenge coins carry a strong military background, they have been awarded to individuals in other spheres, including film, science and music. Each week, MusicRow will honor the industry’s brightest players, awarding challenge coins to artists and songwriters who have earned a No. 1 song on MusicRow’s CountryBreakout Chart beginning with the first MusicRow Chart in 2014.
We recommend that recipients carry the coin on their person at all times, should anyone challenge them to produce it. Each coin will be numbered, and appropriately displays Nashville’s skyline on the back and a microphone on the front, marrying the industry’s two most important players: Country and Music.
A list of coin recipients will be available in the “Charts” menu at MusicRow.com. 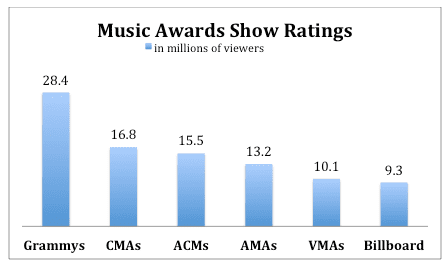 Chart by ‘MusicRow,’ based on info from ‘THR’

A new post on HollywoodReporter.com lists the 10 Most-Watched Awards Shows, including a break down of total viewers, demo rating and median age.

The Oscars on ABC are the top show with 40.4 million viewers. The Grammys on CBS are the most watched music show, and second overall, with 28.4 million.
See the full list. 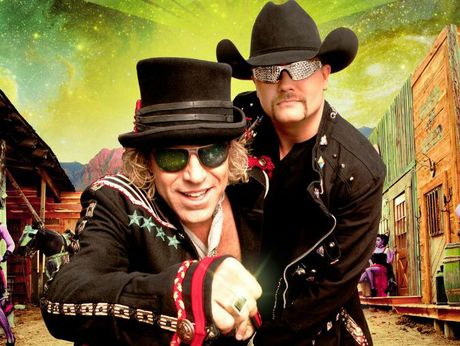 Big & Rich has charged into 2014 with the formation of their own label, Big & Rich Records. Kobalt Label Services (KLS) will be the official label services partner.
As Kobalt’s second Country signing, Big & Rich joins artists including Martina McBride, Prince, New Kids On The Block, and Nick Cave and the Bad Seeds, who utilize KLS’ customized services and self-release their music. The duo’s currently untitled, forthcoming fifth studio album will release later this year. The project was recorded in Nashville and was produced by John Rich and Big Kenny.
The duo will release the album’s first single, “Look At You,” to radio soon. “Look At You” was penned by Rich and Shannon Lawson. New Revolution Entertainment (NRE) will provide national radio promotion. The company is led by Rob Dalton and Jeff Solima.
“2014 is a new milestone for us. We’re completely invigorated to be working with Kobalt and New Revolution and taking this new approach for this exciting album. The music is very fresh, and we’re in a new creative groove which we hope our fans and new audiences will like,” said John Rich and Big Kenny in a joint statement. 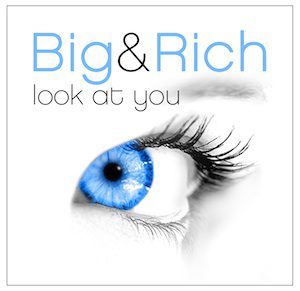 “All of us at NRE are over the top excited about this partnership. ‘Look At You’ is a very obvious sounding commercial smash. This project is top shelf and deep with big singles,” said Dalton.
Diarmuid Quinn, President of Kobalt Label Services North America, said, “I’m thrilled to be back in business with Big & Rich and I treasure my relationship with John and Big Kenny. We were lucky enough to sign them during my tenure at Warner Bros. and they’re two of the most prolific and creative artists I’ve had the opportunity to work with. They’ve delivered an incredible studio album to us that we are eager to help bring to the world. “
https://musicrow.com/wp-content/uploads/2014/01/big-and-rich111.jpg 346 460 Jessica Nicholson https://musicrow.com/wp-content/uploads/2019/03/MusicRow-header-logo-Mar19B.png Jessica Nicholson2014-01-09 10:25:452014-01-09 10:25:45Big & Rich Forms New Label, Prepare New Album and Single 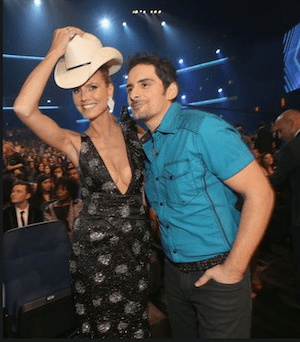 Brad Paisley and Heidi Klum at the PCAs. 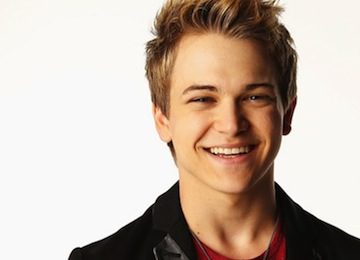 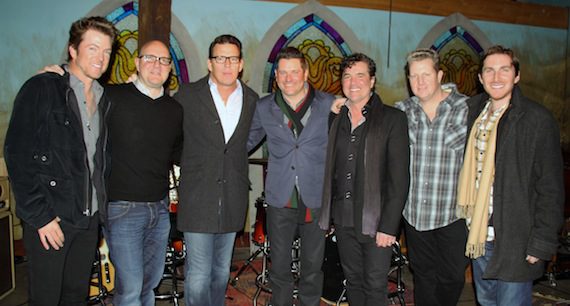 Rascal Flatts is pulsing into a new career phase with hot single “Rewind,” which debuted at a press event this morning (Jan. 8) in Nashville. It’s a “good way to bridge the gap between familiar Rascal Rlatts and a new era of Rascal Flatts,” explained Jay DeMarcus to the crowd assembled at Houston Station.
It’s ironic that a song named “Rewind” marks a leap forward, but the band said it is representative of the upcoming album, where they sought new, fresh ways to tell stories. Penned by Chris DeStefano, Ashley Gorley and Eric Paslay, the lyrics are about a night you want to do all over again: “Un-touch your skin/ un-kiss your lips and kiss ‘em again/…. this is one night/ that I wish I could rewind.” It was recorded at DeMarcus’ studio. Though he has been tallying production credits for several years, this is the first time he and the band have co-produced their own songs. Also contributing tracks to the album is longtime collaborator Dann Huff, and rock/pop stalwart Howard Benson.
During a 12-month recording process, the longest in the band’s history, they searched for songs and a sound that would appeal to longtime fans but fall in line with current country music. Noting a shift in country radio since their debut single in 2000, the group didn’t only want to please radio, they also needed material they believed in and could sing with conviction. They knew that if their music wasn’t authentic it wouldn’t resonate with fans. DeMarcus, Gary LeVox and Joe Don Rooney pushed the creative envelope and recorded songs they wouldn’t have done in the past. By the end of such a lengthy process, it was natural that they started second-guessing some of their choices, especially as top-notch material continued to pile in. One of those late arrivals was “Rewind.” 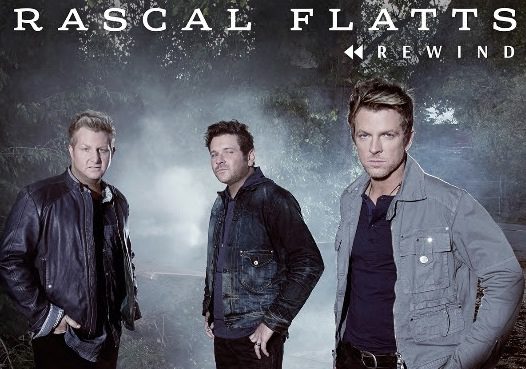 The title of the single prompted the band to reflect on their whirlwind ride over the last 14 years. “I wish we could rewind some of the special moments that flew past us,” admitted LeVox. Just as they did for that first single, the guys are headed out on a radio tour. Following this morning’s event, they hopped a plane to Houston to kick off a 10-day sprint, hitting two or three cities per day. Commandeering the trip is Big Machine Records Sr. VP Promotion Jack Purcell, who is celebrating his 50th birthday today.
Along with a fresh sound, in recent years Rascal Flatts has built a new team by signing with Big Machine and manager Clarence Spalding. DeMarcus thanked BMLG head Scott Borchetta for not pressuring them with recording deadlines. He said, “We had to get over a hump, creatively, to find our stride.”
Next up, Rascal Flatts will hit the road with Sheryl Crow. As in years past, fans can expect plenty of pre-show and parking lot action. Those events will tie in to the group’s charitable initiatives with Vanderbilt Children’s Hospital and Make A Wish, which LeVox called a “magical and important part of our lives.”
https://musicrow.com/wp-content/uploads/2014/01/Flatts-cropped.jpg 260 401 Sarah Skates https://musicrow.com/wp-content/uploads/2019/03/MusicRow-header-logo-Mar19B.png Sarah Skates2014-01-08 15:35:222014-01-08 15:35:22Rascal Flatts Press Play On 'Rewind' 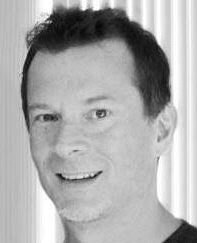