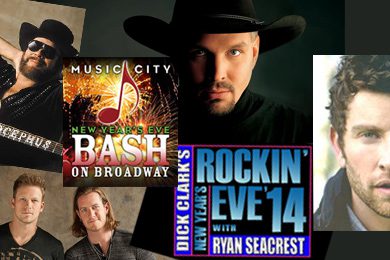 If you won’t be in Las Vegas for New Years weekend for Garth Brooks’ two full-band shows at The Wynn, have tickets to Celine Dion’s Caesars Coliseum or the new Britney Spears A Piece of Me at Planet Hollywood hotel down the strip, you’re in luck because Nashville is bringing a party to you!
Music City is prepared to host its fifth annual New Year’s Eve Bash on Broadway, downtown, between 1st and 5th Ave. The shindig will feature free live music, fireworks and Music City’s own midnight Music Note Drop beginning at 6:30 p.m. Live music will continue throughout the night, even after the countdown to the New Year with the Music Note Drop and fireworks happening in the midnight hour.
Nashville’s celebrity performances will include headlining act Hank Williams Jr., featuring pedal steel guitarist Robert Randolph, along with performances from Brett Eldredge, Blackberry Smoke, Kopecky Family Band and Striking Matches.
For indoor celebrations, Dick Clark’s New Year’s Rockin’ Eve will be hosted from both U.S. coasts, with Ryan Seacrest and Jenny McCarthy in New York City, while Fergie rings in the new year from the west. Florida Georgia Line will be in attendance for Fergie’s feed alongside Capital Cities, Daughtry, Jason Derulo, Fall Out Boy, Florida Georgia Line, Ariana Grande, Jennifer Hudson, Enrique Iglesias, Robin Thicke and The Fray. Miley Cyrus Blondie, Icona Pop and Macklemore & Ryan Lewis will all be broadcast from the Eastern time zone in the Big Apple.
Stay safe, and have a happy New Year from MusicRow!