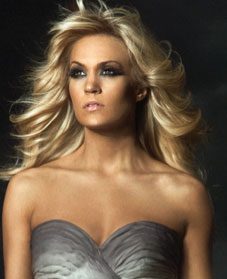 The Country Radio Broadcasters’ Board of Directors announced Carrie Underwood as the recipient of the 2014 Artist Humanitarian Award. Underwood will be honored during the opening ceremonies of Country Radio Seminar (CRS) on Feb. 19, 2014.
“In a format rich with artists that are generous with their time and talents for a wide variety of worthy causes and needs, Carrie Underwood has distinguished herself with her depth of kindnesses and commitment to making a positive difference,” stated CRS President Charlie Morgan.
Underwood established the C.A.T.S. (Checotah Animal, Town, and School) Foundation to focus charitable efforts on her hometown community in Checotah, Okla. She has been part of countless other charitable endeavors, including Pedigree’s Pet Adoption Campaign, Make-A-Wish Foundation, Save The Children, trips to Africa for American Idol’s “Idol Gives Back,” a USO Tour in the Middle East, celebrity fundraisers for City of Hope, and much more. Her recent international Blown Away Tour donated one million dollars from tour proceeds to the American and Canadian Red Cross for disaster relief.
Past recipients of the annual award have included Rascal Flatts, Tim McGraw and Faith Hill, Trace Adkins, Randy Owen, Toby Keith, Brad Paisley, Brooks & Dunn, Reba, Vince Gill, Garth Brooks and Charlie Daniels, among others.
CRS 2014 will be held Feb. 19 – 21, 2014, in downtown Nashville, Tenn.