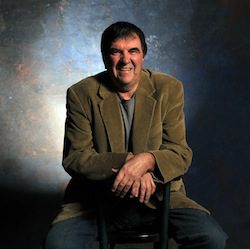 “Murder On Music Row” songwriter Larry Cordle has teamed up with some of the artists who’ve recorded his songs over the past decade for a new duet project chock full of those same songs, reimagined and retooled with a bluegrass or acoustic twist. The Cord Files: All-Star Duets should live up to its name with artists like Garth Brooks, Trisha Yearwood, Kenny Chesney, and Dierks Bentley on the album. The project is due out Oct. 8 on Cordle’s label, MightyCord Records.
The project started nearly 10 years ago at Signal Path Studios as artists’ schedules would allow, with editing and mixing being done by Randy Kohrs, who also contributed resonator and backing vocals. Alison Krauss & Union Station members Jerry Douglas and Ron Block, along with renowned songwriter/musician Carl Jackson also played on the sessions. Krauss, Terri Clark, Del McCoury, Diamond Rio, Ricky Skaggs, Travis Tritt, Kathy Mattea, Daryle Singletary, and Kevin Denney all appear on the star-studded, bluegrass extravaganza.
Rather than trying to choose a single out of the talent-heavy collection, the entire album will be released to radio via Airplay Direct prior to the official drop date. “Lonesome Dove” (Yearwood), “Two Highways” (Krauss), “You Can’t Take It With You When You Go” (Bentley), and “Against the Grain” (Brooks), are just a few of the songs fans can look forward to hearing on the new collection. Cordle’s hit, “Murder on Music Row” also appears on the new CD with a new interpretation by Singletary and Denney.
“I feel like I must have done something right in life that I could call on these larger than life, great artists and wonderful people to help me out with a dream,” Cordle states. “It is simply unbelievable to me that it is this close to becoming reality. I will never be able to repay these folks for doing this for me.”