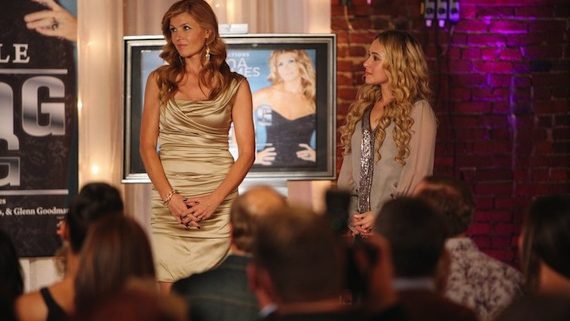 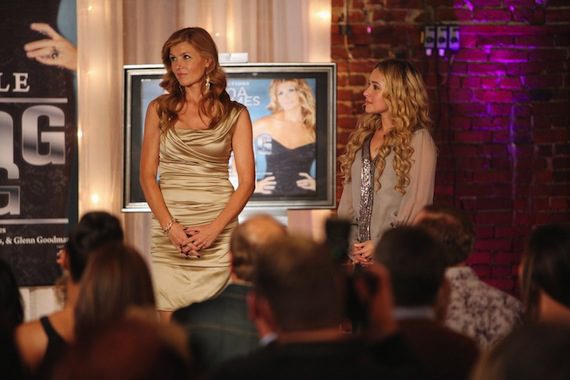 Rayna and Juliette at the No. 1 party.

Most of the action happened at the swanky soiree saluting Rayna and Juliette’s No. 1 duet “Wrong Song.” The affair was definitely a step up from the more informal No. 1 parties held on real-life Music Row. Chris Young, Brantley Gilbert and BMI’s Jody Williams exchanged pleasantries with Rayna during the scene. Elsewhere, radio personality Blair Garner played fan blogger Adam Wergeles and ruffled Juliette’s feathers by asking what it was like to write with a legend like Rayna Jaymes.
Juliette’s mom Jolene had a daylong reprieve from rehab so Juliette reluctantly let her tag along to the party. Jolene was out on the town because she had a court hearing, where Juliette gave an unconvincing and unsympathetic testimony on her mom’s behalf. But by the end of the episode, they reconciled and bonded.
The chemistry between producer Liam and Rayna was red-hot, in private and when he filled in onstage as her guitar player. But that relationship went up in flames at the No. 1 party when she found out that he had been manipulative and deceitful. Calista, the powerhouse head of Countless Records, was trying to woo Rayna away from longtime home Edgehill Republic, and Liam was encouraging the move. But at the party, Edgehill boss Marshall notified Rayna of a key piece of information Liam was withholding: Liam would get his own imprint at Countless if he brought Rayna on board with him. By the end of the episode, Rayna decided to stay with Edgehill, if she gets her own imprint.

Liam is a button pusher, whether it’s ticking off Juliette or questioning Rayna’s happiness with husband Teddy. Nashville’s new mayor Teddy seems to genuinely want to repair his marriage, but Rayna isn’t sure.
And Liam’s not the only guitar player in Rayna’s life giving her a hard time about her marriage. Deacon is at it again, during a scene in his front yard where he is putting out a For Sale sign.
After leaving the Revel Kings tour, Deacon is sinking low. Juliette wants to help him and convinces him to come on her tour as guitar player—much to the surprise of Rayna and Teddy who find out about this at the airport as they leave for the next round of concert dates.
Curious about the characters’ musical influences? Check out their playlists. 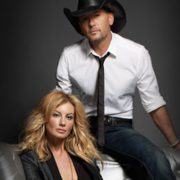 Vegas Bets on McGraw and Hill