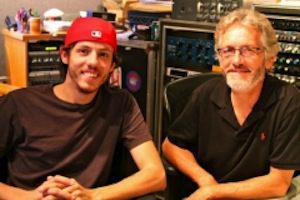 Janson and Stegall taking a break in the studio. Photo: Nick Garvin

Chris Janson is celebrating a major hit as co-writer of Tim McGraw’s “Truck Yeah” while finishing up his first album with Bigger Picture Group. Janson has spent the summer in the studio with producer and Bigger Picture Group Chairman Keith Stegall working on the project.

Janson credits Stegall with helping him find the motivation to stay his course in the music industry. “I had given up on the music business, and then I met Keith,” he says. “We just hit it off. He approached me about liking my music and what I was doing with it and something just clicked. He really motivated me to move forward.”

As a multi-instrumentalist singer-songwriter, Janson has writing credits with Guns N’ Roses and others, and contributed harmonica to Lee Brice’s album Hard 2 Love. Janson released a single, “’Til A Woman Comes Along,” in 2010 on BNA Records. Having opened for Lynyrd Skynyrd and Hank Williams Jr., Janson continues touring and will play a showcase at Nashville’s 3rd & Lindsley on Mon., Aug. 27 at 5 p.m.