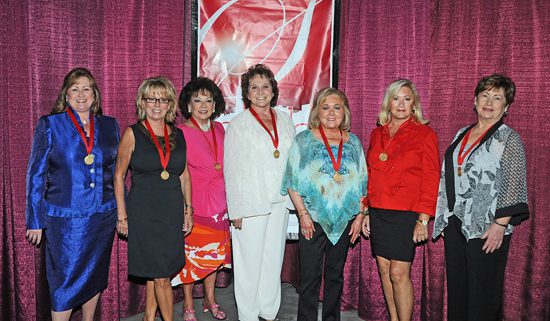 Staged Thursday (8/23) at the new Musicians Hall of Fame venue at Municipal Auditorium, the gala also set an attendance record. More than 350 folks gathered and I am told that many ticket seekers were turned away this year.

This was the 10th anniversary of the SOURCE awards. In recognition of that, the organization chose to honor its founders. So salutes to Kay Smith, Judy Harris, Connie Bradley, Karen Conrad, Judy Wray, Pat Rolfe and Shelia Shipley-Biddy were the order of the day. The “magnificent seven,” as they were dubbed, came up with the idea of annually honoring women in the music business. We entered what used to be Municipal’s exhibit hall. The marquee overhead held the names of the honorees, which was a nice touch. SOURCE’s prior honorees were on exhibit along one wall of what will be the museum’s lobby. Concrete floors have been stained in an auburn hue. A small stage was trimmed with stonework. Art deco chandeliers were overhead.

The rest of the museum is still being built. In fact, the restrooms had just been completed that afternoon. “Promise me you’ll give me a preview when this gets finished in October,” I said to museum mastermind Joe Chambers. “This looks like it is going to be really, really nice.” “I think so too,” he said with a smile.

During the cocktail party, we were serenaded with pop oldies from Ronnie Brown. The keyboardist also provided the traveling music between the award presentations.

The dining area was embellished with hundreds of roses, with massive arrangements on the stage, centerpieces on the tables and individual stems for every woman who’d ever been honored by SOURCE.

For this and every other detail of the evening, we owe a thanks to event co-chairs Tatum Hauck Allsep and Caroline Davis. Not to mention the Gaylord Opryland Resort & Convention Center, which provided the flowers, tables, chairs, staffing and food. Except for the after-dinner cookies, which were provided by Tatum’s father, the king of Christie Cookies.

Singer-songwriter Karen Staley began the program. “Karen Conrad is the reason I’m not a bag lady,” she quipped. “And so many of these women were part of my career. So I wrote a song for all the inductees.” Staley’s super cute “Leave it to a Lady When You Want to Get Something Done” drew whoops and cheers of delight.

“Right on, is all I have to say,” said event co-host Jeannie Seely. “Songwriters really do say it best.”

Her usual hosting partner, Brenda Lee, had to skip last year because of back surgery, but was good to go on Thursday. “I’m back walkin’ and will soon be rockin’ and rollin’ on the road,” said Little Miss Dynamite. Brenda read a congratulatory letter from Garth Brooks, who’d sent corsages to the honorees.

Jeannie told the tale of Judy Wray, who began her music career at Columbia Recording Studios, than served in various capacities at CBS Records for 17 years, worked as Jim Foglesong’s executive assistant at Capitol and went to EMI Publishing before retiring in 2009 after 42 years in the biz.

“I think my award must just be for endurance,” she quipped. “They don’t give a Miss Congeniality.”

Brenda spoke of the accomplishments of Connie Bradley, who began her career as a receptionist at WLAC-TV. Fellow honoree Pat Rolfe got Connie a job on Music Row at Famous Music, which led to stints at Dot, RCA and Bill Hudson & Associates. Connie joined ASCAP in 1976, rising to its Southern Regional Executive Director until her departure in 2010.

“All of the ladies tonight have worked together and helped each other,” said Connie, who thanked Pat and the late Donna Hilley as mentors. “We’re all blessed to work in the music business. And we should all pray for women in need all over the world.”

Jeannie did the honors for Karen Conrad, who began as a receptionist at the Hubert Long Agency. Stints at Mercury Records, ASCAP, Jimmy Buffett’s Coral Reefer Music and Blendingwell ensued. Karen started her own AMR/New Haven Music, grew it into a force to be reckoned with, sold it to BMG and went with it to become BMG’s Nashville VP.

“I don’t consider myself special, but the people around me certainly are,” said Karen. In addition to hubby David Conrad, she thanked her organization, Chicks with Hits. “How would we make it without each other?” she asked.

It was only natural that Brenda Lee introduce Kay Smith – they have been best friends since they were in the seventh grade at Maplewood Junior High. Kay started in the music industry at Nationwide Sound Distributors in 1972. She joined Columbia Recording Studios in 1973, then became secretary to Capitol’s Frank Jones in 1975. In 1983, she came to CBS Records, where she rose to a vice presidency. Since leaving CBS/Sony in 2006, she has been working at the Musicians Hall of Fame.

Jeannie introduced Shelia Shipley-Biddy, a Kentucky native who began her Nashville career at the Monument and RCA labels. RCA’s Joe Galante appointed her as one of the first women in the male-dominated world of radio promotion. She then rose to executive-level positions at MCA Records. In 1994, Shelia went to Decca to become the first female head of a record label in Nashville. Since then, she has been with Vivaton, John Dorris and Flying Island Entertainment.

“If anything, this award is shared with most of the people in this room,” said Shelia. “I am blessed to have never worked a day in my life, because every day I get to do what I love to do.”

Her sentiment was echoed by Judy Harris. “If you love what you do, you will never work a day in your life,” said Judy.

Brenda spoke of Judy’s climb from ASCAP to EMI/Blackwood with Charlie Monk, then on to her own publishing companies, most recently Judy Harris Music.

“I wish I could pay all of you all to have a job working with songwriters,” said Judy. “They are the absolute heart of what we do.”

Jeannie spoke of Pat Rolfe’s start at Hill & Range Songs in 1966, where she became general manager in 1972. She stayed on when Chappell Music bought Hill & Range in 1975. After Warner Bros. bought Chappell in 1987, Connie Bradley brought Pat to ASCAP. That brought things to a circle, since Pat had once launched Connie. Pat remained at ASCAP until 2010, becoming a “mother hen” to a host of young talents.

One of them, Dierks Bentley, made a surprise appearance to present Pat with her honor. “Pat’s my buddy, my girl,” said Dierks. “If you go to Nashville, you should see Pat. She’s a straight shooter and will tell you whether you need to go home. She’s been a great mentor to me through all these years. She really cares.”

“I was getting upset because I was going last,” said Pat. “Now I know why they kept me to the end. Dierks is just an angel. This has been an absolutely fabulous night for all of us.”

Connie said, “This night is like a family reunion.” Which was true. The guest list was simply awash in fabulons.