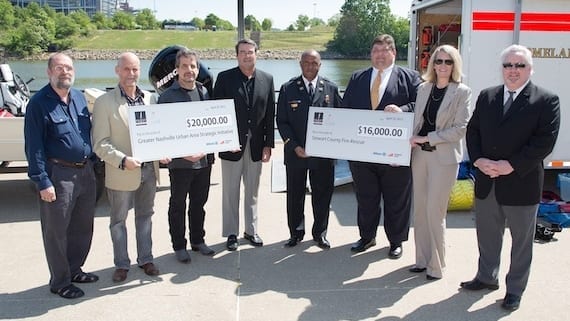 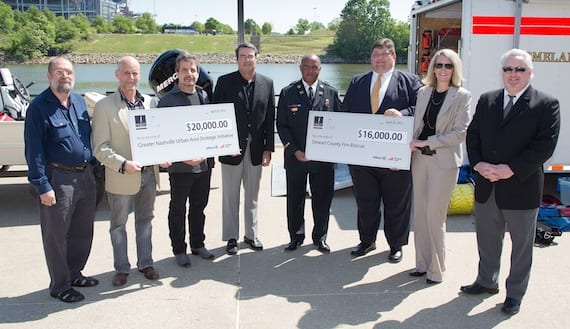 NASH2O, a charity organized by George Gruhn, luthier Joe Glaser, and steel guitarist/producer Bruce Bouton in the wake of the 2010 May floods, recently donated $36,000 to two regional fire service organizations to purchase water rescue equipment. The money was raised by an auction of flood-damaged instruments from top artists, which were sold as collector pieces. The group also received a $10,000 grant by Fireman’s Fund Insurance Company and Frost Specialty.

• MusicRow offers sincere condolences to photographer Alan Mayor on the passing of his mother, Rosemary Fulmer Mayor of Clarksville. She was 86 and died Sun., May 13, 2012. She spent over 30 years working in the Montgomery County School system and was preceded in death by her husband, Lt. Col Albert Mayor Jr. USAF. She is survived by daughter Theresa Mayor Smith (Lee) of Cadiz; sons Alan Leslie Mayor of Nashville, and Kenneth Albert Mayor of Clarksville; and two grandchildren.

Visitation will be at 1 p.m. today (5/17) until the funeral service at 3 p.m. at Grace Lutheran Church in Clarksville. Burial will be tomorrow (5/18) at 10 a.m. at Kentucky Veterans Cemetery West. In lieu of flowers, donations may be made to Grace Lutheran Church’s Rosemary Fulmer Mayor College Scholarship Fund, or Vanderbilt Children’s Hospital. Arrangements are in care of Neal-Tarpley-Parchman Funeral Home, 1510 Madison Street, Clarksville, TN 37040; (931) 645-6488. Online condolences may be made at www.neal-tarpley.com.

• Abacast, a provider of cloud-based streaming and ad management services to the radio industry, and SESAC have entered a partnership whereby SESAC will offer Abacast services to its new Radio Website licensees. SESAC will promote Abacast’s Clarity™ Digital Radio System to prospective radio licensees that launch new streaming ventures. Under this program, terrestrial radio stations that launch new streaming ventures with Abacast and license with SESAC will qualify for special introductory discounts from both organizations.

• New West Records has launched an imprint based in Athens, GA named Normaltown Records. The label’s first two Athens based signings Kalen Nash and White Violet, will be joined by labelmate Daniel Romano, a Juno Award winner, for a show in Nashville at the High Watt at Mercy Lounge on June 12. Select songs are available for free download at normaltownrecords.com.

• Changes to state law made during the 107th General Assembly will mean $2 million in anticipated funding for the state’s film incentive program, administered by the Tennessee Film Entertainment and Music Commission (TFEMC). In addition, reforms to the state’s film funding grant formula will give smaller, indigenous film productions access to a larger share of available grant dollars. Under the new program, projects with budgets over $200,000 will be eligible to receive grants equal to 25 percent of their qualified Tennessee expenditures. Previously, the combined grant and tax credit system awarded a 17 percent grant and 15 percent refundable tax credit only to productions with budgets over $1 million.