But unlike most newcomers, Houchins (pronounced How-chins) had already achieved a lot, especially for someone in his early 40s. He arrived with a portfolio of hits, fresh ideas and a track record of success. There was only one problem, he didn’t know exactly how it worked on the Nashville side of the tracks. (Read Part 1 HERE) MR: Do you really believe that music sales might stop generating revenue in a few years?
Shannon: I want people to buy music for as long as possible, but music sales are shrinking. For us it’s now all about the profitability of each project, not just record sales. So we look at touring numbers, too. An artist might only break even on record sales, but if the music drove up touring receipts from $3,000 to $120,000 per month, then that’s a big success. That’s how we look at it. For the majors, as long as they are getting more money out than they put in, it will remain a good business. But the majors only have Plan A, a full blown radio campaign, there is no Plan B. We rarely start with Plan A. Most of our acts start slowly and build their story.

MR: Do you see the country format as an album or a single business?
Shannon: Obviously we’d rather sell albums, even though we are in a single business because it’s a larger sale. I look first at the album chart when it comes in, but we are headed toward a single business, we see it in the numbers every day.

MR: Hiring Tom Baldrica made some people take notice of AJE for the first time. How did it happen?
Shannon: I was in the process of building my radio team and read Tom had left Sony. I thought, “This guy looks like he knows what he is doing.” I called Tony Morreale and he said, “Yeah, I know Tom we worked together at Sony. Everyone and their brother will try to hire Tom.” I asked, “Can we at least meet with him?” I meet with everybody, because you never know what can happen, it’s a relationship business. Tom wanted some time to decide his next move, so we checked in with each other for about three months. Ultimately he decided he liked the way we did business. Tom can pitch the Average Joes story about a million times better than I can. He understands our model 100%. It couldn’t have been a better situation for us and not just because of what Tom’s done in his past life, but for the person he is and how he operates from within our business model.

MR Has the move to Nashville matched your expectations?
Shannon: I like the people and the Nashville way of doing business. You can’t go to lunch or breakfast without running into somebody, because people are just on top of each other. Where I came from everything had a price tag on it. If you called somebody and said, “I’d like you to jump on this record with this other artist,” you better be ready to work out the deal or have some cash on you that day. Here it’s like, “I’ll jump on this, you jump on that. Sure, I’ll show up at your golf tournament.” It’s a people-based atmosphere and I love that about this town. If I had a choice about where to launch the label from and start all over again, I’d say Nashville. MR: Colt Ford’s music is such a hybrid body of work—with traditional country instruments and lyrics, but also hip-hop stylings.
Shannon: How we make a Colt Ford record changes constantly. Sometimes we start with the music and build off that, then sometimes Colt has co-written with someone and we’ll listen back and figure what we want to do from the song demo. It’s a combination. We may use live drums, loops or combine the two. It may sound rock heavy or softer. We’ll use fiddle, steel or banjo. Noah Gordon (AJE A&R) and I went in with just a guitar and wrote choruses for four of the songs on the upcoming record. We sent them to Colt, who said, “Yeah I love em.” Then we built and structured the song without any live instrumentation, just loops and acoustic guitar. Finally we went in the studio and cut over the top of it. By mix time I have a bunch of stuff from which to decide what stays or goes. I compare it to shooting a movie because you shoot a lot and decide what gels later. Dann Huff is producing four songs on Colt’s new record, too. I’m having just as much fun getting Dann’s perspective on what Colt Ford does as I do making the record myself. I’ve already heard some of what they’ve done and it’s awesome. He’s doing a great job.

MR: What about all the guest artists on Colt’s records that sing the choruses?
Shannon: For his first record we thought the only way to get people to understand it’s a country record was to soften the blow by getting somebody country to participate. But we didn’t know anybody. We met John Michael Montgomery and after about three months of courting he agreed to cut “Ride Through The Country.” Then the Jamey Johnson thing happened. Jamey wasn’t even in a deal at the time. He wrote “Tailgate” with Colt. A lot of people think that Jamey appears on the album singing the song he wrote, but actually he’s singing a song I wrote, “Cold Beer.” Then before we put out the record Jamey’s career blew up so we then had two country guests on the record. In between the first and second album, Colt became more integrated into the Nashville scene and we were able to attract different folks. Now it’s just kind of a thing.

It was tough in the beginning, but I told Colt, “Look at this guest process like the Michael Keaton Batman movies, where the big star was really Jack Nicholson.” I said, “Pretty soon you’ll be able to shine on your own.” And that is what the series did because it’s cool now to be on a Colt Ford record. Of course we’ve been respectful of people’s releases and not doing singles that conflict. It’s about the creative process. If having two people on a song makes something special that the fans are going to love, then do it. And we’ve returned the favor ten times over because people call and ask, “Can I get Colt?” and zoom he’s right over there. 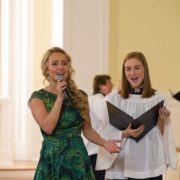 Primetime 'Nashville': Where He Leads Me