A new company, www.redigi.com, is drawing fire from copyright owners as it attempts to create a marketplace to buy and sell previously owned digital files. A New York Times article, Site To Resell Music Files Has Critics notes, “The service has already drawn concern from music executives and legal scholars, who say it is operating in a gray area of the law. Last Thursday the Recording Industry Association of America, which represents the major record companies, sent ReDigi a cease-and-desist letter, accusing it of copyright infringement.” MusicRow first reported on the company on Oct. 17, 2011.

Here’s how the Cambridge, Mass. company works. ReDigi sells music downloads for 79¢ per song and users get a 20¢ coupon for each song they upload. Consumers swapping music actually pay only 59¢ per song after figuring in the coupon discount. “ReDigi is a marketplace that gives users tools to be in compliance with copyright law,” says ReDigi head John Ossenmacher. “Before I put a file up for sale ReDigi says you will need to delete them, and if not it won’t take them.” The company also has plans to resell e-books. 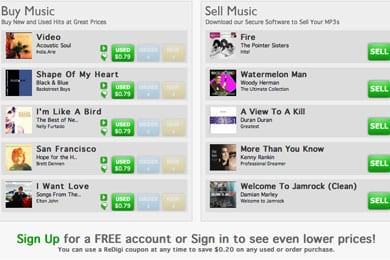 According to the web site, “Only tracks purchased from legal download sites such as; iTunes, etc. are eligible. But hey, don’t sweat it. If you aren’t sure where it came from, we will help you figure it out, all from the privacy of your own computer. Your ReDigi account grows with every song you sell. So your old music helps you buy the new music you want, no cash required. Once you buy songs on ReDigi, you can sell them back at any time! Store your music in our FREE cloud. When you’re done listening to them, sell them back with the click of a button.”

Also mentioned on the site are payments to artists and labels. “The musician and label get a percentage of every sale, often netting more than they get from a new music site and a lot more than they get from streaming music.” However, numbers are not mentioned. The site already has almost 77,000 Twitter followers (@ReDigiMusic) and close to 44,000 Facebook fans (http://www.facebook.com/ReDigi).

At issue is the legality of this new business model which is based mostly upon the first-sale doctrine which gives consumers the right to resell a copyrighted work. However, legal scholars are not in agreement, according to the NYT article because ReDigi’s method involves making a digital copy, something not allowed under the first-sale rules. The concept is largely untested with respect to digital goods. According to the article, Ossenmacher claims he has “a process called, ‘atomic transaction’ that can transfer files between users without copying.”

The web site addresses the question of its legality:

“We are law-abiding citizens here at ReDigi. The thing that sets ReDigi apart from any company that has attempted to do what we are doing is our revolutionary patent pending technology that facilitates the ‘verification’ and ‘hand off’ of a digital music file from the seller to the buyer, ensuring both that the file is from a legitimate source and eligible for resale on ReDigi, and that any additional copies of a sold file that may have been made by the seller (e.g., for use on multiple devices in accordance with ‘fair use’ limitations on copying for personal use), are also deleted. In this way, ReDigi brings the familiar process of selling a physical good (CD, Vinyl, Pink Cadillac, etc.) into the digital age. Let’s use the Pink Cadillac as an example. You bought that outrageous gas-guzzler, you own the title, and by all means you have the right to sell it. However, once you hand over the keys, it’s no longer yours to drive. The same concept applies to a used song sold through ReDigi. Once you sell a song, you no longer have access to it. ReDigi removes the song from your hard drive and all synced devices as soon as your legally obtained digital song is confirmed for sale. This is how ReDigi stays legit, and how you now have access to an incredible marketplace where rights long accepted in the physical world may now be applied to digital goods.”