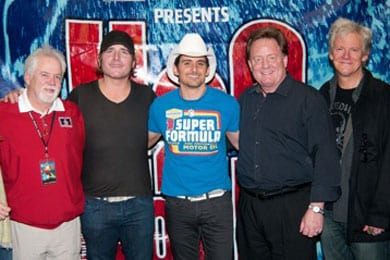 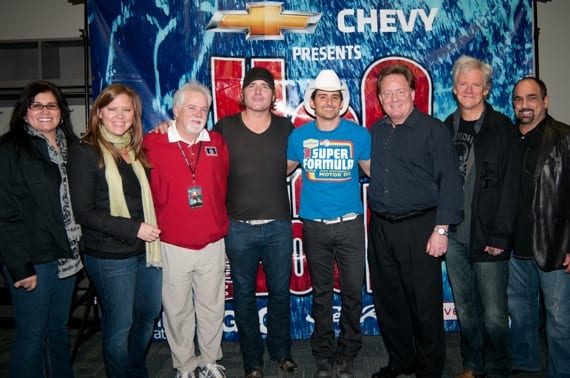 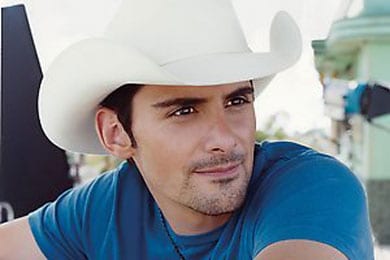 Brad Paisley is the reigning CMA Entertainer of the Year, so if you’re reading this you probably already know he’s a member of an elite club of artists that write great songs, play incredible guitar and sing convincingly. But if you haven’t seen his live show, then you still haven’t sampled his genius for presenting his music in an arena setting. Saturday night’s Nashville performance (2/26) was the last stop on his H20 tour that began shortly after last year’s May floods ravaged Music City.
Each song in the high energy two-hour set gets treated with a full production almost akin to the style of a broadway musical. But instead of dancers, costume changes and canvas backdrops, Paisley creates warm, engaging video “sets” that highlight, frame and sometimes expand the lyrics using animation and more. Often he deftly  blurs the lines between the two dimensional screen and those on the three dimensional stage. He also freely explores/prowls the venue’s extremities to get closer with “the people in the cheap seats.” The show even employs previously unheard musical interludes to bridge moments between songs. Video screens at concerts are hardly new, but Paisley has not only reinvented the process, he’s elevated it.
The effect of Paisley’s magic video paintbox—he creates many of these video segments himself—is mesmerizing but not distracting. Staging for the H20 tour  was sparse. Four circular risers provide a home for the band and directly behind them is a balcony, the rest is a giant video screen. And last but not least on stage  was Paisley himself, dressed in jeans, t-shirt and white hat—the epitome of one of the good guys.
Hit songs flooded the stage such as “Celebrity,” “Waiting On A Woman,” “Water,” “American Saturday Night,” “Welcome To The Future” and more. Alison Krauss came out to duet on “Whiskey Lullaby.” (Oh wait, that was only a video image.) “Letter To Me,” voiced with acoustic guitar was one audience favorite, among many.
The evening closed with a second encore—“Alcohol.” A portable bar was quickly unfolded and a busload of industry revelers poured out on stage to help celebrate the tour’s final performance. Sony Nashville label head Gary Overton and wife Jan were all smiles, and Paisley manager, “lovable” Bill Simmons could be seen sharing a celebratory hug with tour promoter Brian O’Connell.
• • •
Jerrod Niemann and then Darius Rucker warmed the crowd earlier in the evening. Predictably Niemann’s hit “Lover, Lover” was the standout, and closer for his set. Rucker opened smartly with “Alright,” which showed his experience and good vocal chops. Covers of “Family Tradition” and “Purple Rain” were excellent choices during his set and also took the crowd out of its seats. 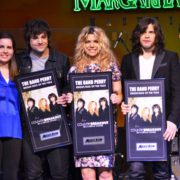 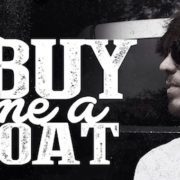 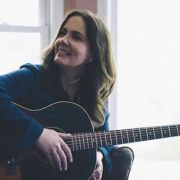