Hollywood entertainment blog TheWrap.com, usually content to bluster over the world of film and TV has issued a pair of music industry articles offering dire 2011 predictions.
“Has the music stopped for the broken record business?” asks writer Johnnie L. Roberts, who arrives at TheWrap via stints for Newsweek and the Wall Street Journal. Roberts quotes an unnamed major label senior exec who says, “No other industry will go through as much change as the music industry will in the next six months.”
Roberts notes that the recent arrival of CEO Lucian Grainge to Universal came with an imperative to cut expenses. Unofficial sources peg those cuts at anywhere from $50 million all the way to a seemingly impossible $400 million. Leadership changes are also in play at Sony with Rolf Schmidt-Holtz out in April. Will the Sony seat be filled by Doug Morris now leaving Universal or could it be Tom Whalley, recently of Warner Music Group who will fill the vacant chair?
“The business of selling music is over as we knew it,” a former label chief said to TheWrap. “And the future of it is yet to be determined by anyone.”
Roberts says that shrinking sales and narrowing margins are finally catching up with companies and points to EMI’s Guy Hands as another troubled example saying, “Unable to earn enough to avoid breaching billions of dollars of loans piled atop the music company, EMI is already essentially in play — to be traded all or in parts to the highest bidder.” 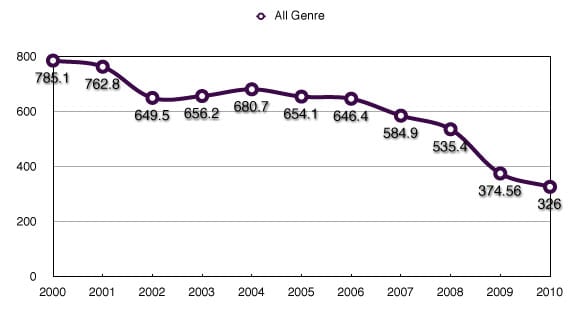 Analysis: The grim discussion now facing the music industry is not totally unwarranted, although it may be a touch dramatized to help create more emotional headlines. According to Nielsen SoundScan, total U.S. album sales in 2000 were about 785 million. In 2010 those sales had dropped 58.8% to 326 million. During that time period the industry worked to reduce expenses and  take advantage of additional revenues from touring, publishing, merchandise, litigation and more. Those additional income streams have helped to offset the effects of falling album sales. However, little has been done to solve the specific problem of eroding music sales.
Will 2011 be the year that the industry tackles the music sales issue head on? With sales reaching ever lower levels time is running out to find a solution. Educating the consumer and locking files has had failed results. Maybe the next approach is ask consumers to pay on the way into the store.