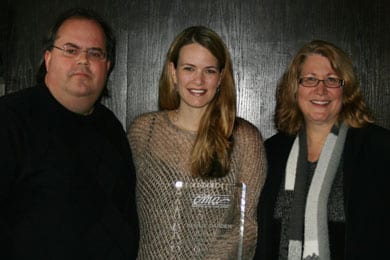 The CMA has announced that its 2010 Media Achievement Award will go to Beville Darden, co-founder and editor of the Country Music news Website, TheBoot.com, which is distributed via AOL Music. Darden has also served as a music writer/reporter for both AOL.com and Spinner.com. After graduating from Mountain Brook High School in Birmingham, Ala., she attended Vanderbilt University in Nashville. Later she was a television news writer before a stint as an on-air personality at WSM Radio.
The CMA Media Achievement Award was established to recognize outstanding achievements in the media as they relate to Country Music. Print and Internet journalists, columnists, authors, editors, syndicated radio reporters, television writers, producers and bookers are eligible to win this award.
“I am beyond humbled,” said Darden. “A CMA Award? I can’t carry a tune in a bucket! But it is my honor every single day to write about those who can. The Country Music industry has been so welcoming to The Boot, and we owe our success to all of the wonderful publicists, labels, and artists who work so closely with us to bring unique content to Country Music fans. Thank you to the voters and to my wonderful friends at CMA!”
TheBoot was founded in 2004 and receives more than 64,000 site visits per day according to StatBrain.com. CMA’s recent consumer research study reveals that 14 percent of Online CountryPhiles and 10 percent of Online MusicPhiles visit AOL Music (TheBoot) for Country Music content once a week or more. Content is posted daily and archived with 2,800 features currently stored in the Country news category.
Past winners of the CMA Media Achievement Award include:
1982 Jack Hurst
1983 Neil Hickey
1984 Dolly Carlisle
1985 Red O’Donnell
1986 No Award
1987 David Zimmerman
1988 Robert K. Oermann
1989 Bob Claypool
1990 Dick Heard
1991 No Award
1992 Mark McEwen
1993 Lynn Lester
1994 Judy Massa
1995 Clay Smith
1996 Tisi Aylward
1997 Jay Orr
1998 Chet Flippo
1999 Hazel Smith
2000 Neil Pond
2001 Harry Chapman
2002 Jim Patterson
2003 Denise Quan
2004 Alanna Nash
2005 Mark Bracco
2006 Donna Hughes
2007 Storme Warren
2008 Monica Escobedo
2009 Cynthia Sanz