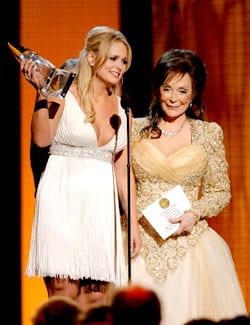 Top CMA Awards nominee Miranda Lambert, who entered “Country Music’s Biggest Night” with a record nine nominations, walked away with three CMA Awards, including Female Vocalist, Album for Revolution (produced by Frank Liddell and Mike Wrucke) and Music Video of the Year for “The House That Built Me” (directed by Trey Fanjoy, who picked up her second consecutive Award in that category). The three Awards were the first CMAs she has won in her career.

Awards co-host Brad Paisley won the big one, Entertainer of the Year, which was his first win in the category.

For an interesting look around at what people are saying about the show and the performances, check out these links…

Zap2it.com–Witty and irreverent remarks with a 17 photo slide show

ENTERTAINER OF THE YEAR
Brad Paisley

VOCAL DUO OF THE YEAR
Sugarland

SONG OF THE YEAR
(Award goes to Songwriter(s))
“The House That Built Me” — Writers: Tom Douglas, Allen Shamblin

MUSIC VIDEO OF THE YEAR
(Award goes to Artist and Director)
“The House That Built Me” — Miranda Lambert
Director: Trey Fanjoy