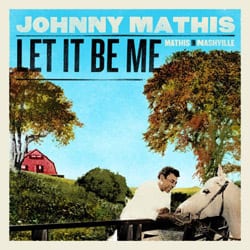 Gwyneth Paltrow’s doing it, Platinum-selling rockers Train are doing it, and rumor has that even Cher is getting into the game. Now we can add romantic crooner Johnny Mathis to the list of celebrities who have recently jumped over to the country side of the fence. For his first full album inspired by country music, Mathis, whose knowledge and love of music crosses all genres, handpicked the songs for Let It Be Me: Mathis In Nashville.

Producers Johnny and Fred Mollin assembled a group of the finest musicians in Nashville to record an album intentionally free of modern studio tricks. With engineer and Randy Travis producer Kyle Lehning on board to capture the sessions, Mathis recorded these songs live in the studio over the course of a week. His approach is sympathetic to the original country arrangements, with the musicians supporting some of the most intimate vocals Mathis has ever recorded.

Signed to Columbia Records in the mid-1950’s, Mathis is the longest-running artist on the label, with 17 million RIAA certified album and singles sales in the US alone. A sublime vocalist whose approach to pop music transcends passing fads and trends, Mathis has performed songs in an incredible variety of styles and categories — from music composed for stage and film to golden era jazz standards, contemporary pop hits, and holiday music both sacred and secular — assuring his reputation as one of the most enduring traditional pop vocalists in music history.

Perhaps best-known for his landmark singles (three of his recordings – “Chances Are,” “It’s Not For Me To Say,” and “Misty” – have been inducted into the Grammy Hall of Fame) Mathis was one of the first musical artists to embrace the album concept and record thematically and sonically coherent collections of songs. His 1958 release, Johnny’s Greatest Hits inaugurated the ongoing “greatest hits” anthology phenomenon, becoming one of the most popular albums of all time after spending an unprecedented 490 continuous weeks (almost ten years) on the Billboard Top Albums Chart.  Mathis was given the Lifetime Achievement Award from the Academy of Recording Arts and Sciences in 2003.