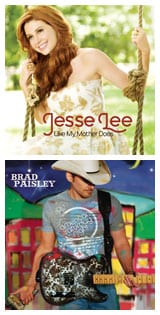 These may be the Dog Days of summer, but some of the puppies in this stack of new tunes are as cute as the dickens.

Ashley Gearing, Taylor Swift, The Roys and Amber Hayes are all bopping brightly. Joey + Rory have teamed with The Zac Brown Band to record an excellent ode to country’s core fans.

Jesse Lee wins the DisCovery Award. She not only has a richly evocative country vocal style, but also the listening session’s best written song.

What, exactly, makes a Disc of the Day? This town puts Wikileaks to shame. The rush-release of “Mine” by Taylor after a leaked version appeared certainly made it the most newsworthy these singles. But for being true to life, sonically dynamic and utterly musically winning, you can’t deny two-time-daddy Brad Paisley the real Disc of the Day prize.

JOEY + RORY WITH THE ZAC BROWN BAND/This Song’s For You
Writer: none listed; Producer: Keith Stegall; Publisher: none listed; Sugar Hill (track)
—A splendid, uplifting anthem for everyday, working-class folks who yearn for better times. “We’re up on this stage, but you’re the star.” Amen to that. By the way, hang on for the perfectly harmonized, a cappella finale.

GEORGE DUCAS/Never Goes Away
Writer: George Ducas/Randy Rogers/Jon Henderson; Producer: none listed; Publisher: Propel/Pure Bluie/Warner-Tamerlane/Lonely Motel/Bug, no performance rights listed; Propel (972-800-0004)
—Dizzy in love, then drowning in heartbreak. It’s enough to give a guy’s neck whiplash. In any case, the track fizzes and sizzles right along, all the way through.

ASHLEY GEARING/What You Think About Us
Writer: Brian Davis/Ashley Gearing/Ben Glover; Producer: The Fringe; Publisher: Curb/Mike Curb/Melrose Nashville/WB/Screaming Norman, ASCAP/BMI; Curb
—This rumbling rocker has enough “bottom” to kick you right out of your seat and send you twirling around the room. It’s a big, big sound, but she manages to ride atop the whole thing with plenty of vocal authority. Sing it, sister.

BRAD PAISLEY/Anything Like Me
Writer: Brad Paisley/Chris DuBois/Dave Turnbull; Producer: Frank Rogers; Publisher: EMI April/New Sea Gayle/Circle C/V Bulls/Full Circle, ASCAP; Arista
—It’s easy to imagine where Dad Brad got his inspiration for this loping outing. He meditates on what his kid is going to grow up to be like. Just before the bridge, the acoustic instruments go into a twinkling, enchanting break. If you weren’t completely charmed by that point, you will be.

JESSE LEE/Like My Mother Does
Writer: Nathan Chapman/Nikki Williams/Liz Rose; Producer: Nathan Chapman; Publisher: Sony-ATV Tree/Pain in the Art/Perfect Mess/Sony-ATV Timber/Toreador Tunes, BMI/SESAC; Atlantic/Warner
—Love her sweet, countrified delivery. And the topic of the lyric is refreshingly novel. Promising in the extreme. Spin this and watch the phones light up.

TAYLOR SWIFT/Mine
Writer: Taylor Swift; Producer: Nathan Chapman & Taylor Swift; Publisher: Sony-ATV/Taylor Swift, BMI; Big Machine
—It is somewhat wordy. But the rhythm track carries it along relentlessly as she spins out her saga of a shaky love that turns out to be lasting.

CHARLIE DANIELS/Iraq Blues
Writer: Charlie Daniels; Producer: Charlie Daniels & Patrick Kelly; Publisher: CDB,/Wooly Swamp, BMI; E1/Blue Hat (track) (www.charliedaniels.com)
—Charlie’s new CD is an America-themed collection called Land That I Love. I compiles past successes such as “American Farmer,” “This Ain’t No Rag it’s the Flag,” “In America” and “Still in Saigon” with some new tunes. This traditionally structured, straightforward blues-rock outing is from the point of view of a deployed soldier who can’t wait to get back home. Charlie really bawls and growls it out.

FRANK ORTEGA/My Old Man
Writer: none listed; Producer: Phil O’Donnell & Gary Hannan; Publisher: none listed; Villa One/Quarterback (www.frankortega.com)
—This is kind of the male version of Jesse Lee’s mama song. Frank looks up his dad, who was both tough and tender. The major difference is that in this one, the parent dies too young. And just to rub it in, the heartbeat percussion that closes the song, stops abruptly.