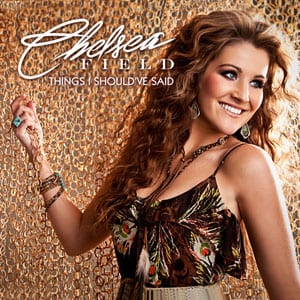 “Things I Should Have Said”

“She definitely has the vocal firepower to pull off this searing, sizzling rocker. Go, baby. You are coming in loud and clear.”
—Robert K. Oermann, MusicRow

“Things I Should Have Said” is the debut single from Moxy Records artist Chelsea Field. At 19 the singer left her home in Marion, Ohio for Nashville to pursue a career in music. It was here she started putting the pieces in place for the release of her upcoming debut album, produced by award-winning songwriter/producer Trey Bruce (Trace Adkins, Chris Ledoux, Sir Cliff Richard). As a songwriter herself, Chelsea continued to craft new material while fielding submissions from some of Nashville’s finest writers in her search for just the right collection of songs.

“For better or worse, the songs you choose to put on your album determine how people perceive you and your style as an artist,” she explains. “It was important for me to find the songs that fit me, because while one song might be great for another singer, it won’t come across to the fans as mine if it sounds like somebody else.”

As a performer, Field has opened shows for stars like Jason Aldean, Miranda Lambert, Billy Currington, Phil Vassar, Dierks Bentley, Big & Rich and many others. The opportunity to work with some of country’s biggest and brightest has taught her much about performing live and being a star.

“I’ve got all the confidence in the world right now,” she says of her new material and live show. “Really, I’ve been a performer all my life, and being out in front of all those fans are some of my favorite moments of this whole process… I’ve been waiting all my life for this.”