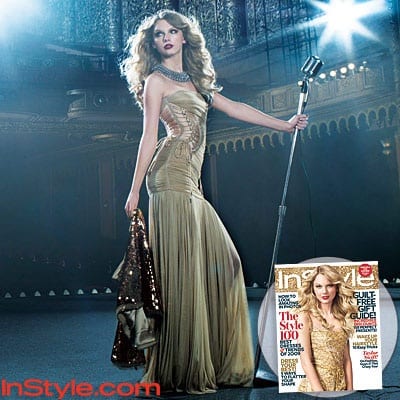 Further evidence? Taylor on the new cover of "InStyle."

Country’s last popularity peak was spearheaded by Garth Brooks who attracted both countryphiles and musicphiles—fans with a wide variety of musical tastes. Today there are a great many similarities to those times with the media’s strong attraction toward Taylor Swift and her music which to date has sold over 10 million records.

When Garth was riding his wave of popularity he helped, (and was helped), by what we now call the class of ’89. Is there a new class of ’09? Hot acts were showcased on the CMA Awards such as Lady Antebellum, Darius Rucker, Jason Aldean, Miranda Lambert, Zac Brown Band, Jamey Johnson and Billy Currington. Favorites such as Carrie Underwood, Brad Paisley, Sugarland, George Strait, Kenny Chesney, Martina McBride and Reba proved themselves current and cutting edge. It was an amazing tour de force of new, developing and established talents.

Could country be on the verge of a strong expansion lead by the 19-year-old singer/songwriter and reinforced by a vigorous rising class of appealing artists ready to benefit from the format’s increased attention? Let’s examine some of the recent dots
on our tastemaker radar and see if they connect.

A lot of high profile happenings have taken place in a short timespan. The CMA Awards show this week drew its highest ratings since 2005 with an estimated 35 million viewers watching at least some portion of the show. Swift performed twice and won four trophies. The precocious prodigy also brought Saturday Night Live its best ratings of the season when she appeared as host and musical guest on Nov. 7. Bundle Swift’s recent appearance/performance on Oprah, the VMA/Kanye West incident which brought worldwide coverage, plus her sold-out tour and it is easy to see why she is now the largest selling artist across all formats. And where is she from? What does she call herself? [Answers: Nashville; country.]

A grassroots indication that attention is turning toward country music, also happened the day following the Awards when MusicRow.com experienced its largest ever one-day traffic numbers—a staggering increase of 37% over its previous all-time best day. People were searching out information about Swift, the awards and the format in numbers we have never seen before.

Is Taylor the new Garth? Will her magnetic popularity reconnect country with a larger multi-format audience? Is there a class of ’09? Time will tell, but it appears that a new energy in country music is starting to rumble across America. Hopefully we’ll see it reflected on the holiday sales charts. If these dots are connecting, it will mean good things for everyone on Music Row in the coming year. Bring it on!