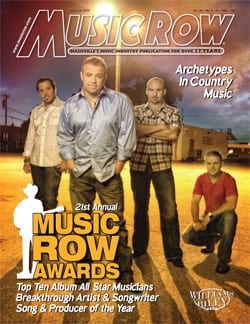 Interesting Fact: The band is named after the guitar player’s great-grandfather.

Williams Riley lead singer Steve Williams was working in the oil fields of the Gulf of Mexico when he passed along some of his songwriting work to popular singer-songwriter Edwin McCain at McCain’s concert in New Orleans. He won McCain’s support and eventually other top names in the music industry rallied behind Williams to help his music find a larger audience. Among those offering support is rock’s most famous guitarist, Slash, who joins country artist Bryan White and McCain on Williams Riley’s debut album.

“I can’t believe how passionate everyone has been about what we’re doing,” says Williams. “Not long ago, I was just a guy writing songs in Louisiana. Now a bunch of my heroes are playing with me and my band on my songs because they love what I’m doing, that tells me that we must be doing something right.” Williams realizes that an album featuring McCain, Slash and White might sound diverse—and he says that’s exactly what it is. “I wanted to make a country album, but one that pushed against the boundaries and appealed to fans outside of country music too,” he says. “One reason I asked Derek George to co-produce was that I wanted the album to stay within the parameters of contemporary country music. The reason I insisted that Noel (Golden) co-produce was that I knew he’d push the boundaries and capture the energy that I wanted for this record.”