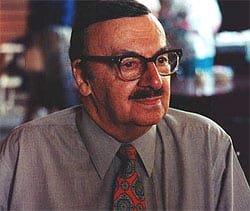 Pianist James D. Walbert has died at the age of 91 near Birmingham, Alabama.

He began his career as the teenage accompanist for the famed Vaughan Quartet of Lawrenceburg, Tennessee. The quartet was among the acts recorded at Nashville’s very first recording sessions, in 1928. He was the grandson of the group’s founder, James D. Vaughan, “The Father of Southern Gospel Music.” After studying in Nashville, Chicago and New York, Jim Walbert became a piano teacher, composer and accompanist.

Among his students were Gordon Stoker of The Jordanaires and Derrell Stewart of The Florida Boys. His songs were recorded by The Blackwood Brothers, The Statesmen Quartet, Doyle Lawson & Quicksilver and Tennessee Ernie Ford, as well as the Vaughan Quartet.

During his long career, he accompanied such stars as Judy Garland, Red Skelton and Dick Van Dyke. He taught piano in Birmingham from 1947 to 2003.

Memorabilia from the Vaughan and Walbert families is on display in the James D. Vaughan Museum in Lawrenceburg and at the Country Music Hall of Fame in Nashville.

Jim Walbert died on June 7 following a long illness. He is survived by his wife Eileen, son David, daughter Pam Montenero, nine grandchildren and eight great-grandchildren. He will be buried in the family plot in Lawrenceburg.