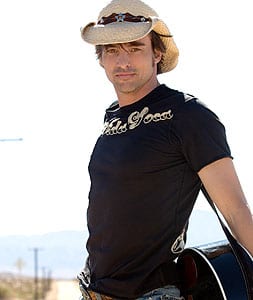 “Gunslinger,” the infectious title track from Keni Thomas’s new album, is featured on this year’s CMA Music Fest Sampler and available for over 100,000 free downloads through September 2009. The new single, written by Thomas, is the follow up to the hit video and single, “Shreveport 2 LA,” which dominated GAC’s Top 20 Video chart for 16 weeks. The video for “Gunslinger” was filmed in Dallas at the rodeo and will be released in the coming weeks. Thomas continues to tour both nationwide and abroad with his band, Cornbread.

This past winter, Thomas embarked on his fourth USO Hope & Freedom Holiday tour to the Middle East with Craig Morgan and Mark Wills. In early June, Thomas sang the National Anthem at the new Yankee Stadium in New York in connection with Military Appreciation Day.

A portion of the proceeds from “Gunslinger” will benefit the Special Operations Warrior Foundation, Hero Fund, established by Keni to provide college education for children of soldiers killed in training or combat. To date, more than 700 children have had their college education paid for as a direct result of funds raised through the Hero Fund.

Whether standing on the stage of the Grand Ole Opry or entertaining the troops in Iraq, Thomas is using his gifts to deliver a message through his words and his music. Thomas’s new album, Gunslinger, is a collection of insightful songs that live and breathe the stories of life. Gunslinger is the follow-up to Thomas’s critically acclaimed debut, Flags of Our Fathers.